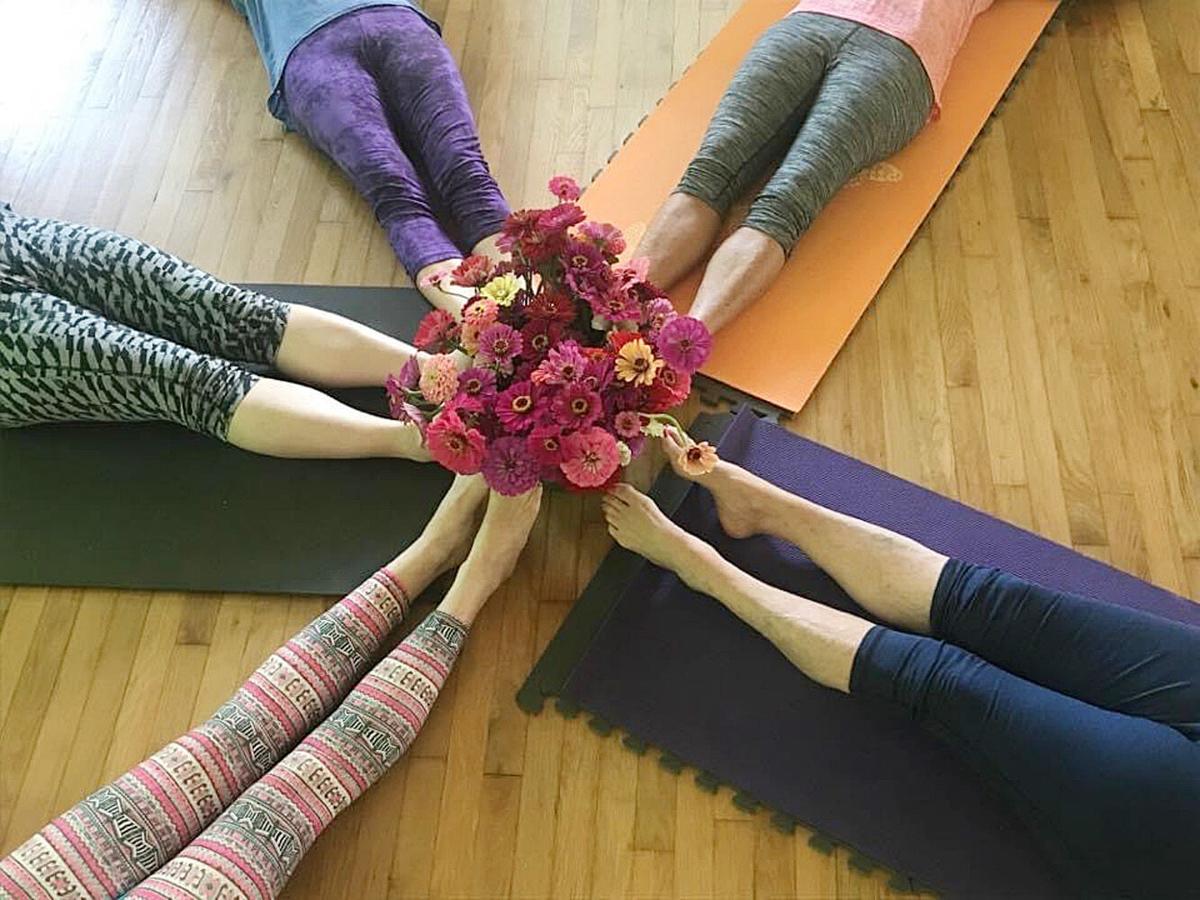 Pegi Vaughn, Forsyth’s premier yoga instructor, is coming up on her 70th birthday but says she has no plans to stop anytime soon. Raised an Army brat, Vaughn traveled all over growing up, briefly living in Japan and Germany. Eventually brought to Georgia when her father was stationed at Fort Benning, Vaughn enrolled at Georgia Southern and wound up settling in Monroe after college.

“If you’re not born and raised in Forsyth, you’re not from Forsyth. People will know your face, but you’ll never be a local. I was always somebody’s mother or somebody’s wife. It must be the accent, but people always ask where I’m from. They know I’m not from here. But I’m around people from so many different backgrounds that labels don’t concern me that much. I am where I am. I know a lot of locals, but I’ll always be the Army brat at heart.”

Vaughn spent most of her career teaching middle schoolers at Monroe Academy. One day, Vaughn’s two daughters came back home from UGA raving about this new exercise fad called yoga.

“My daughters came home with these yoga instructions as part of their Equestrian team training. My eldest asked if I’d like to do a yoga practice with her and I said sure. She told me to take a big breath and raise my arms, which I did. Then she said fold all the way to your toes and I realized I could only touch my knees. I said gosh, I should be doing this. I’ve lost all my flexibility and that’s how it all started.”

Vaughn was still teaching when she started going to a few classes. She even gave her daughter-in-law a yoga mat for her birthday, so she’d have someone to go with. She loved it so much that in 2003, Vaugh opened up a yoga studio on Tift College Drive called Breathe at an old property she owned. Vaughn’s first students were primarily students and faculty from school.

As the studio began to grow, Vaughn decided she needed formal schooling. She wound up enrolling in a 9-month training course at the Savannah Yoga Center, which was one of the only places that taught yoga in the state at that time. After getting her certificate, Vaughn came back and continued teaching middle school until Monroe Academy closed in 2009. After that, Vaughn didn’t apply for another teaching job. Instead, she went into yoga full-time and has been instructing now for 20 years.

Breathe was hit hard when Covid-19 hit and wound up closing for 6 months. Vaughn had sold her studio downtown and just made arrangements with the city to rent a building uptown when the government closed everything.

“People were calling wanting me to teach at their houses and do private yoga. Forsyth Presbyterian Church downtown was nice enough to give me a parish house to teach in. I also opened up a space at my house in River Forest. I teach three classes out of my house and three classes in Forsyth right now because I’m trying to grow back into the studio I was before Coronavirus hit. I’ve had some people asking me to do class via zoom, but I like to walk around the class and help students make adjustments so virtual wasn’t an option.”

Vaughn teaches all different levels, from challenging classes, gentle classes, restorative classes, therapeutic classes and a chair class for seniors in their 70’s, 80’s and 90’s. Vaughn had many seniors from chair yoga reaching out in the months following the shutdown saying that they were struggling without the classes. Some had even fallen and broken bones. That’s when Vaughn was compelled to find a building to reopen.

“I said, ‘they may close us down and I don’t know if we’re going to stay open, but I’m going to try.’ So, I made a point of taking their temperature when they came in, had everyone wear masks till in their chair and social distanced the chairs. I did all of those things just so the government of Forsyth wouldn’t come in and close us down. I’ve been back open for twenty weeks now, everyone’s doing fine, and I haven’t been shut down yet.

“My oldest student is 92 and my youngest is 4. So, all different types, all different ages. You can swap around too if a class is too difficult or easy. I tell all my students to only do what they’re comfortable doing. It’s about finding calm, not competition. This is your mat, your practice and you do what you can do. I usually take them to a place in a yoga pose and say, ‘stay right here if this is challenging. But if you want more, do this.’ I just take them on a journey. Take them a little bit deeper into the pose and they can go where they want to go. I tell people, if you don’t like yoga then you’re in the wrong class. You just have to find the place that benefits you.”

Vaughn claims that people come to yoga for all different reasons, whether it be for stress relief, chronic pain, tightness or loss of flexibility, weight management, to improve circulation or cardiovascular conditioning, anxiety, breathing or just to clear one’s head.

“There is nobody that can’t take yoga. Even if you’re quadriplegic, you can sit in your chair or lay on a mat and feel the benefits of deep yoga breathing.”

In Vaughn’s class, yoga poses are called Asana and there’re 27 different poses with many different variations of each. Vaughn begins every class with a period of meditation. The class just sits there quietly in an easy pose with eyes closed and music playing.

“I just help them to let their day go and to start anew. We meditate and we do deep breathing exercises. After that, I take them into a very slow warmup stretch, just getting them ready for their practice. Then, we begin with mat poses. After a period of that, I take them up a level and we do our standing and balancing poses. At the end, I take them back down to the mat for some more breathing exercises and stretches. I finish with Savasana, the corpse pose, which is perhaps the most important pose in all of yoga. You lay on your mat like a corpse and your body is so relaxed from everything that some people actually fall asleep. You just kind of melt into your mat and that’s when I do a little bit of reading, either from a poem or piece of literature. Then, we all sit back up and feel 100% better.”

Vaughn stresses that while yoga originates from India and Hindu teaching, her class is not religious.

“I don’t do any teaching from different religions. Most of the people that come to my class are Christian. When I first opened, a lot of people in Forsyth were concerned with it being some sort of religion. Yoga is not a religion. I call mine therapeutic yoga because I address their physical and mental issues. I’m really not concerned with what religion you’re from. I don’t even address that.”

Nowadays, yoga is on every street corner. But back when Vaughn started, it was still seen as foreign and viewed with suspicion. There are gyms now that even teach power yoga and hot yoga. Vaughn sees this as an oxymoron since yoga is supposed to be about relaxation.

“Therapeutic yoga just keeps you comfortable in your skin. I feel better now and more physically fit than I did in my 40’s.” Vaughn thinks the reason for yoga’s mass popularity has to do with an increase in stress.

“We have made stress our normal existence. If we’re not stressed, we think something’s wrong. Stress builds up and we don’t know how to get rid of it. A lot of people come to me and just say I’m tense, I’m stressed, my mind won’t stop, I can’t sleep at night and I teach them how to find that peace of mind. You should control your mind and not have your mind controlling you. And it’s not just old people but young people who are stressed as well. These are stressful times we’re living in.

“A lot of people will call and say I don’t think I can do it. I can’t balance. I’m too tight. And I tell them, that’s why you’re coming. All the reasons you’re not coming are the reasons you should be coming. Because I can undo all of that. When most people come for the first time, it’s an awakening. They don’t know how tight they’ve gotten or that they’ve lost their balance.

“Many first timers also get self-conscious about doing the exercises in front of others. A lot of people go the whole practice with their eyes closed. When you’re in it, you’re not aware of anyone else in the room. They’re into their own self and mat. It’s an individual practice.” Vaughn says it’s called practice because it doesn’t end. It’s a lifestyle that you can still do at age 100.

“It really helps maintain your strength, flexibility and circulation as you age. Our bones thin if they don’t hold weight. That’s why we do one legged stands and balancing poses, but I tell my students to use everything that happens through their day to increase their strength. If you’re in the grocery store and have a cart in front of you, try standing on one of your legs as you wait in checkout.”

“In the beginning, after my daughters first showed me yoga, I told them I want to open a yoga studio. And they said ‘mom, you don’t know anything about yoga!’ I said Forsyth needs a yoga studio. My mission was to help calm the mind, body and spirit of anyone that came to my studio, whether it be 2 people or 10. Now, I have classes with 20 people in them. I feel like my students need me to help nurture them in their yoga journey. I see the benefits of it every day. That’s what keeps me going. I look at my students and think about the first day they walked in and how far they’ve come. I once wrote a term paper that started: ‘yoga’s the answer. What was your question?’ I’ll keep doing yoga for as long as I can.”