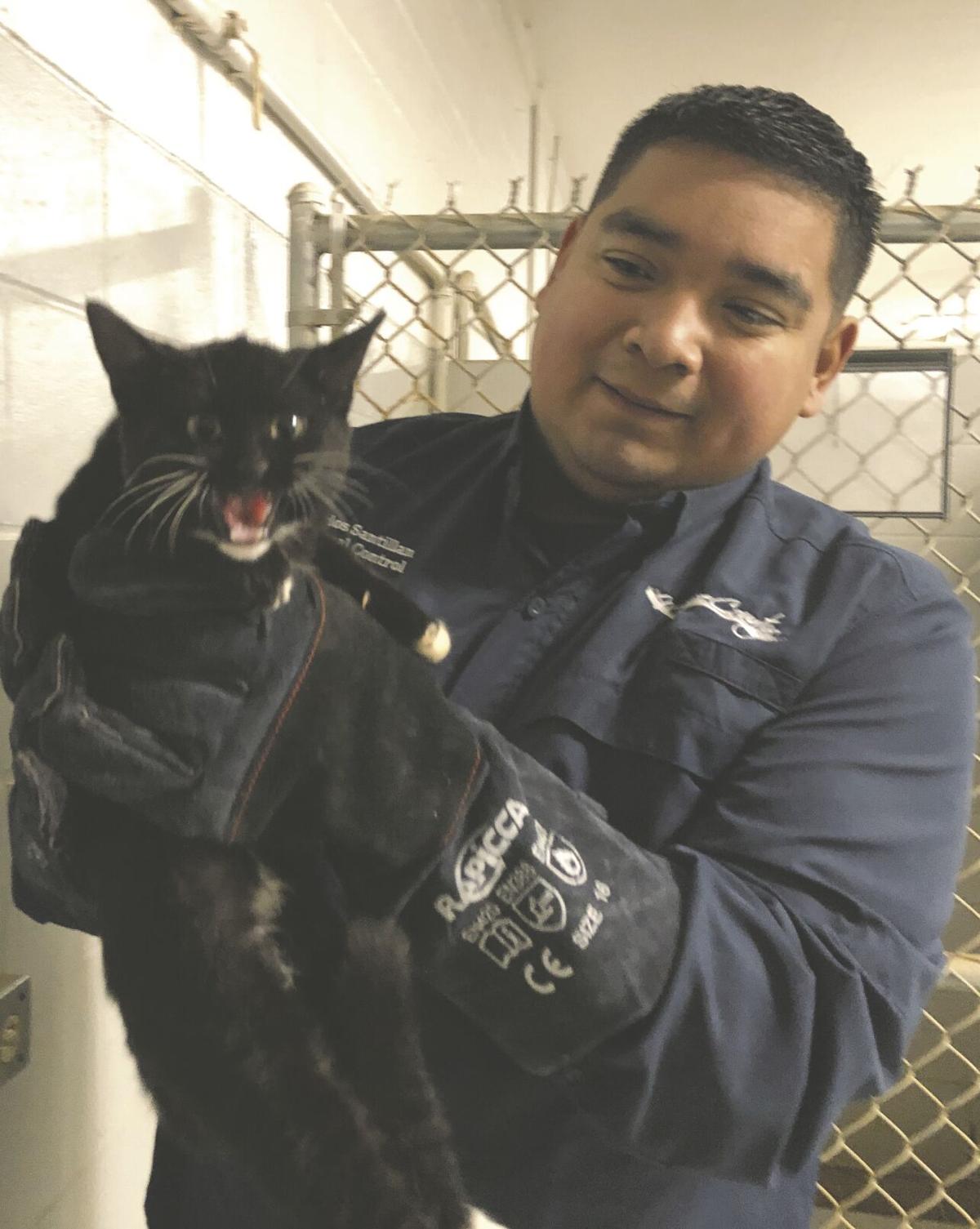 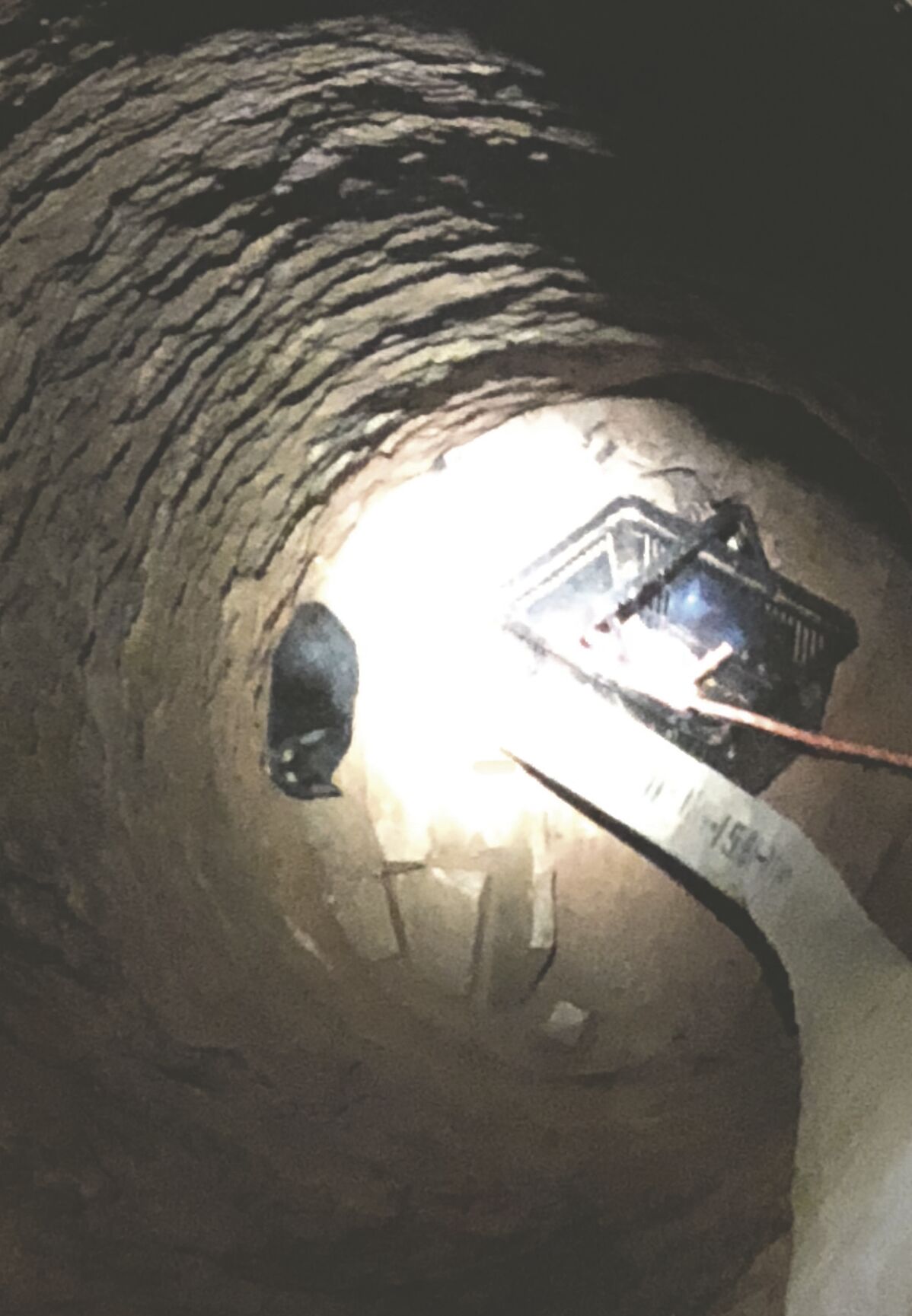 A lucky tom cat was rescued after falling down a 40-foot well underneath an East Main Street home on Saturday, only to escape from animal control.

In the early morning hours last Saturday, Jan. 9, a small black feral cat with white paws, now known as “Houdini”, fell 40 feet into a dark well underneath the home of Christian Dean at 321 E. Main Street. He wasn’t discovered until around 6:30 a.m. when Dean heard him squalling as he took his dog for a walk.

He hoped it wasn’t under his house, but, of course, it was. He told the reporter, “I walked around the backyard trying to find the source of the crying and I kind of had a hunch it would be under the house. I hoped it wouldn’t be but once I opened the crawl space, I could hear it real clear. I took my flashlight out and looked down the well and found it.”

Dean, who is a sergeant in the National Guard, summoned his neighbor who showed up with a squirrel cage and a rope. Dean minced some left-over roast beef and after warming it up he placed it in the cage as bait and they lowered it into the well. He said, “I warmed up the roast beef so the cat would be able to smell it better.” But even with such a tempting aroma, the cat ignored the food and cowered in the darkness. That’s when Dean’s wife, Morgan suggested they call the fire department.

The Forsyth Fire Department soon arrived, and they dropped a fire hose down into the hole in hopes the cat would climb out. After assessing the situation, the decision was made to wait it out and see if the cat would take to the bait. Throughout the day, the firemen returned in between calls and checked on the cat while Dean pulled up the cage every couple of hours and put in a fresh supply of warmed-over, minced roast beef.

In the evening, the Deans went out to eat with their two children and when they returned, fire trucks were again parked in front of their house. Thirty minutes later, the cat finally gave in to hunger, went for the bait and was pulled to the surface. It was then taken to the fire station and after being fed and cleaned up, Monroe County Animal Services picked it up and took it to impound.

Dean said, “We spent the whole day crawling in and out of that crawl space. The cat didn’t want to move for a really long time, then eventually it got hungry and went in the cage.”

Then on the way to the Animal Services facilities, the cat somehow escaped its carrier and when Animal Services officer Carlos Santillan opened the tailgate to his truck, the cat was ready to pounce and leaped to freedom somewhere into the woods behind the building.

On Monday evening, Becky Gifford, the Animal Services director, heard a cat crying and traced the sound to beneath the hood of her car. But when she raised the hood the cat again sprang out and took off.

With the help of Santillan, traps were set, and the cat was recaptured Tuesday morning. Gifford quipped, “That little cat has a feisty disposition."

Gifford said they only have facilities for dogs so the cat will be taken to the Rock On Rescue. Santillan said this was nothing new as they must deal with all sorts of animals including goats, vultures, horses and once even an alligator.

Dean said he has plans to cover the hole to prevent future incidents like this. “We have a lot of strays in this neighborhood. There are so many we have to wash our pillows on the front porch swings every month because of all the cats that like to sleep on them.”

On the plus side, the neighborhood has no problems with rodents.