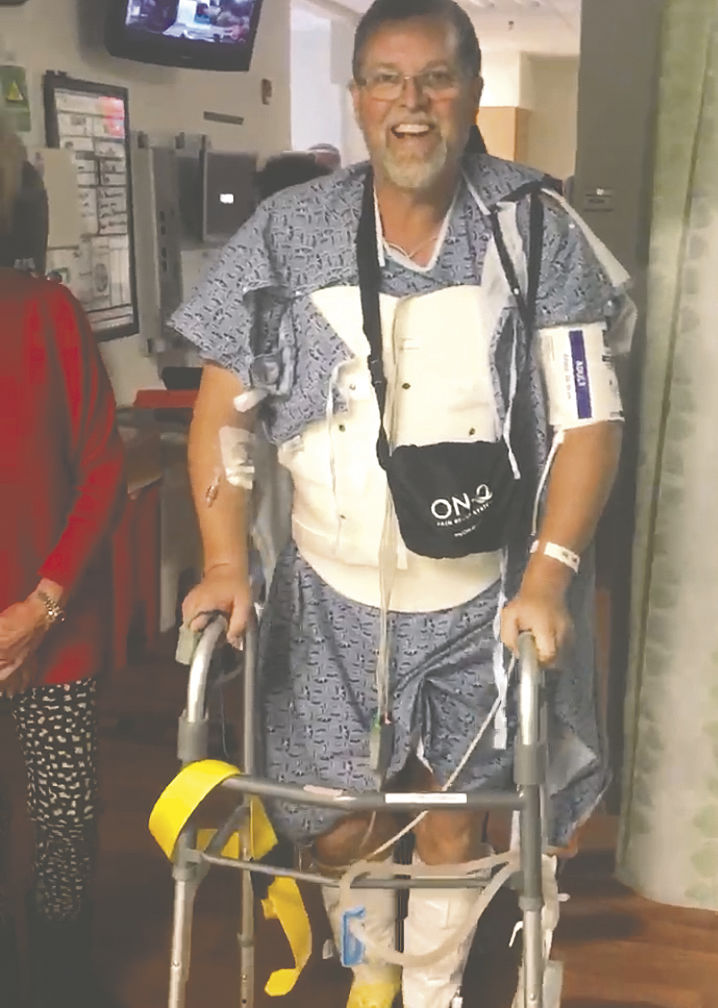 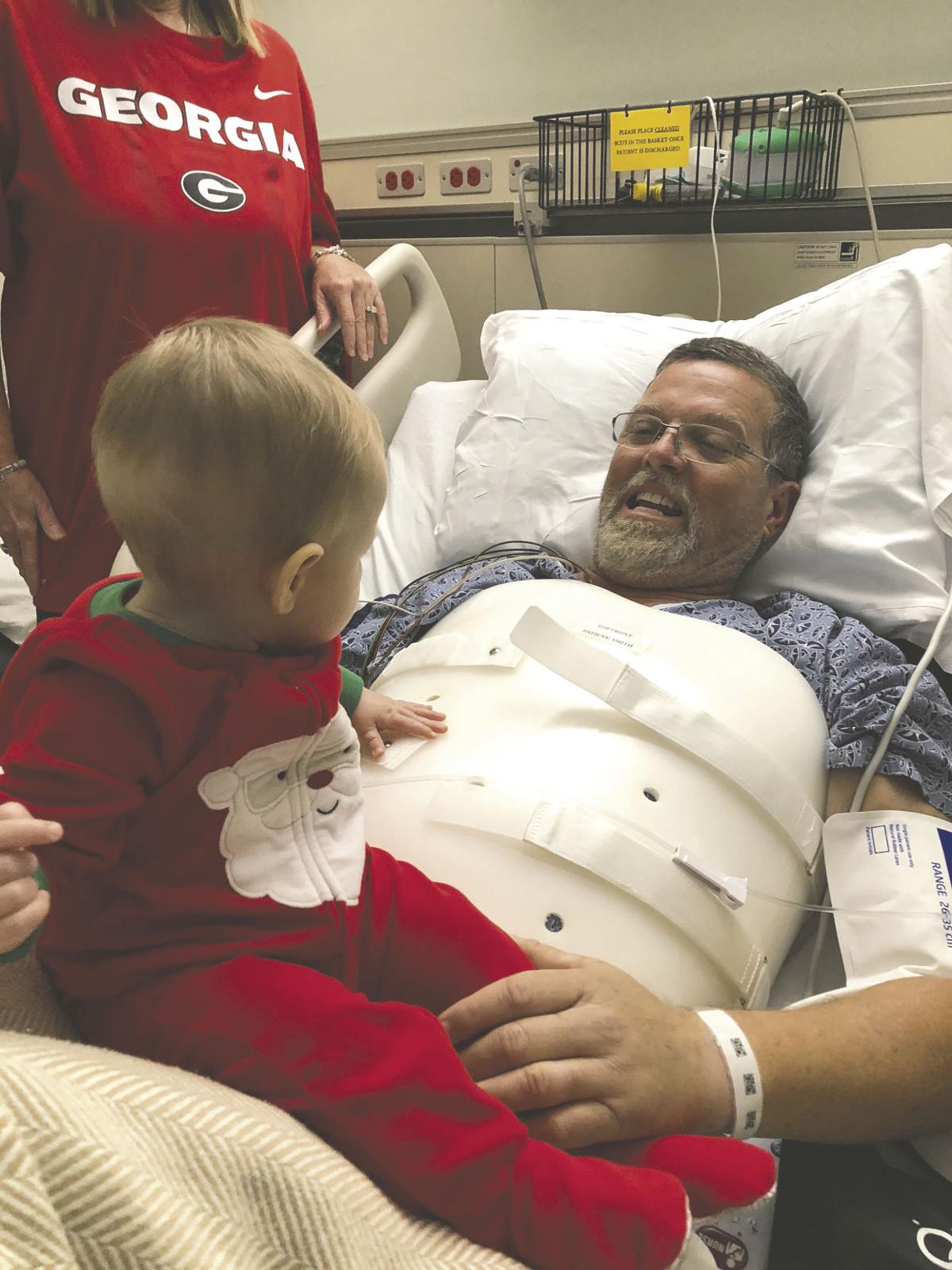 Forsyth veterinarian Dr. Kevin Smith returns to work full-time this week nearly two months after breaking two vertebrae and eight ribs in a 10-foot fall out of a deer stand on Thanksgiving morning.

“I was blessed,” said Smith. “It worked out in my direction.”

Smith and his 10-year-old nephew Max Tate had climbed a 10-foot ladder into a wooden box stand before daylight on Thanksgiving Day, Nov. 28 to wait on a big buck. The property belongs to Kevin's brother, Dr. Jason Smith, in Twiggs County, who was hunting not too far away.

About 8:30 a.m., said Kevin, they saw a nice buck chasing a deer about 300 yards away. But Kevin said he decided it was too far away and would rather wait with hopes that Max could shoot one. Shortly thereafter they got a text that Jason had shot a 10-pointer. Jason’s  son was on his way to pick them up so they prepared to climb back down. But as Max approached the ladder he fell through a soft spot in the plywood floor, and luckily got lodged in the floor at his shoulders, stopping his fall. Kevin saw his nephew falling and lunged to grab him, but somehow somersaulted off the stand and fell 10 feet to the ground, landing on his back as parts of the stand’s wall fell on top of him. Kevin said he doesn’t know if he tripped or what happened, and neither did his nephew, who was probably in shock from almost falling himself.

Landing on his back, Smith knew he was seriously hurt, but was relieved that he had feeling in his arms and legs. Max was able to get out of his hole in the stand and scamper to the ground, and he had his phone with him and was able to call for help. Kevin told him to call his wife Trina first and let her know. Then he called 9-1-1 and then called his dad.

Jason, a pediatrician, was about 20 minutes away with his deer but rushed and got there more quickly. Kevin said he was concerned because he felt fluid in his chest and was worried it would get into his lungs.

“I kept asking ‘how’s my color’” said Smith. ‘I could hardly breathe.”

The ambulance couldn’t reach Kevin in the woods so they put him on a backboard and loaded him on a 4-wheel drive truck. The truck carried Kevin to the ambulance which then took him to Navicent Health. Doctors determined that Kevin had broken eight ribs and his T-10 and T-12 back vertebrae, which Kevin called another miracle because it allowed doctors to the use the unbroken T-11 vertebra as a support when they fused the two broken ones with plates and screws on Saturday, Nov. 30, two days after the fall. Kevin said doctors had him on so many drugs after surgery that the big Georgia football fan couldn’t even stay awake through the Georgia Tech game, dozing off when the Dogs led 17-7. Kevin said he was relieved when he woke up two hours later and UGA led 52-7. Then on Monday, Dec. 2, doctors also did surgery to plate his broken ribs, which Kevin said has given them added stability and greatly reduced his pain. On a check up visit the following month, some Brazilian doctors were shadowing Kevin’s surgeon and conceded they don’t do such pain-relieving procedures in their country. That wasn’t the only good sign. Both surgeons on call the day of the accident were friends of Kevin’s brother, Jason, giving the family excellent care.

After lying in bed for two weeks, Kevin required some rehab to build up his strength, but he was finally able to go home a week before Christmas after about three weeks in the hospital.

Since then, Kevin said he has been getting steadily better and only takes Tylenol and then a muscle relaxer at night.

Kevin said he was very fortunate not to have neurological damage. And he said he was also fortunate to have the prayers, cards and good wishes from the community.

“We had a ton of people reach out,” said Smith. “Churches you don’t even attend check on you. It was unbelievable how many people. You just don’t know how many people care about you.”

Kevin, who recently opened his veterinary practice on Berner Avenue, said his wife has let him schedule three clients per day during his recovery. But as of this week, he’s back on a regular work schedule.

As for hunting, Kevin said he’s putting that off until next year. His brother took a bulldozer the day after the accident to tear down the deer stand. In its place, he bought three new box stands that are only three feet off the ground.

While the fall was painful, Kevin said he has so many things to be thankful for that he doesn’t make time for self pity. He could feel his arms and legs. His nephew was there and had a phone. The surgeons knew his family. The unbroken vertebra between the broken ones gave doctors great support for the repair. The rib plate helped reduce the pain.

Kevin noted that the doctor even gave him an extra inch in height during surgery.