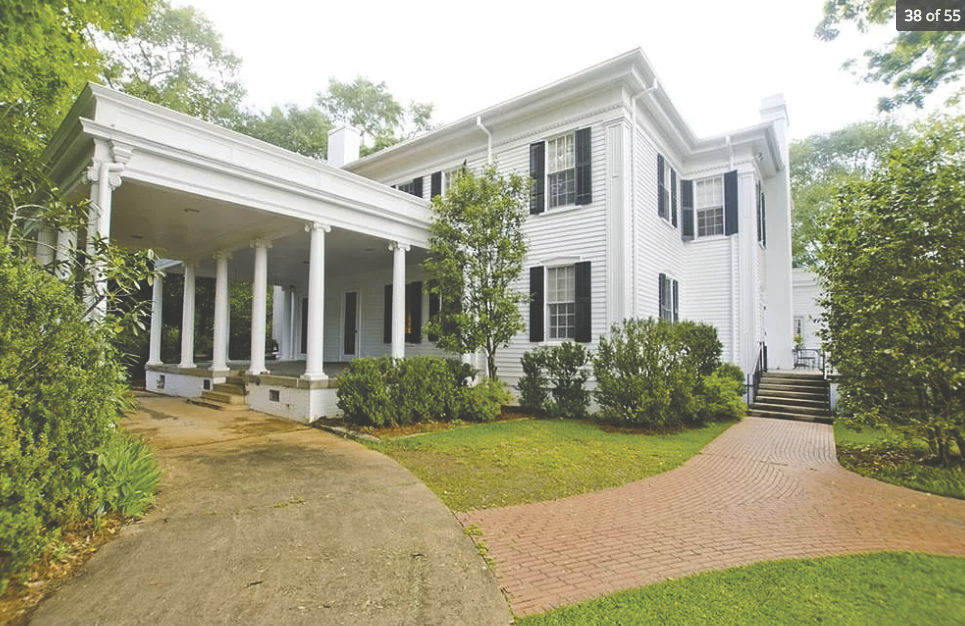 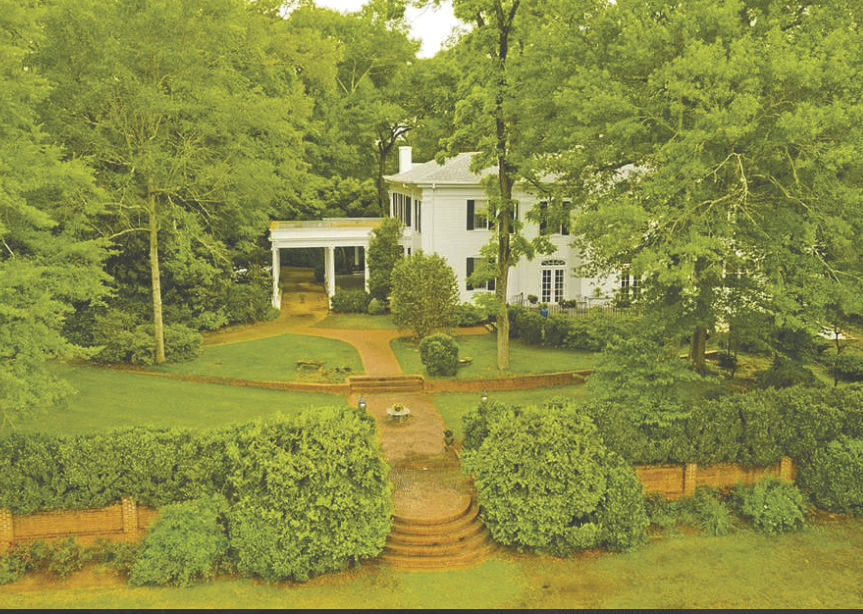 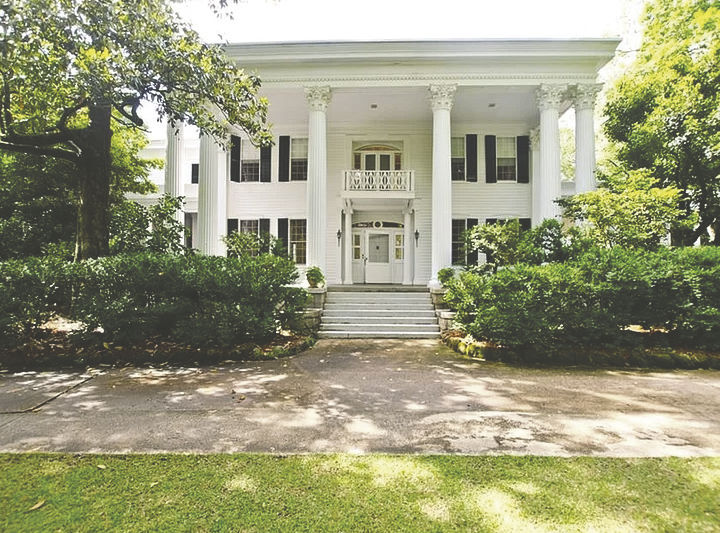 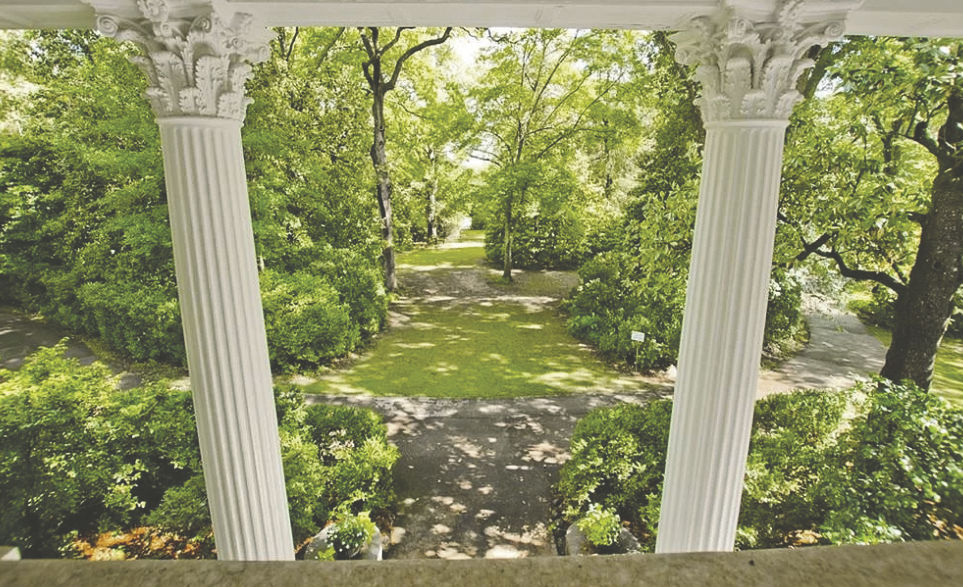 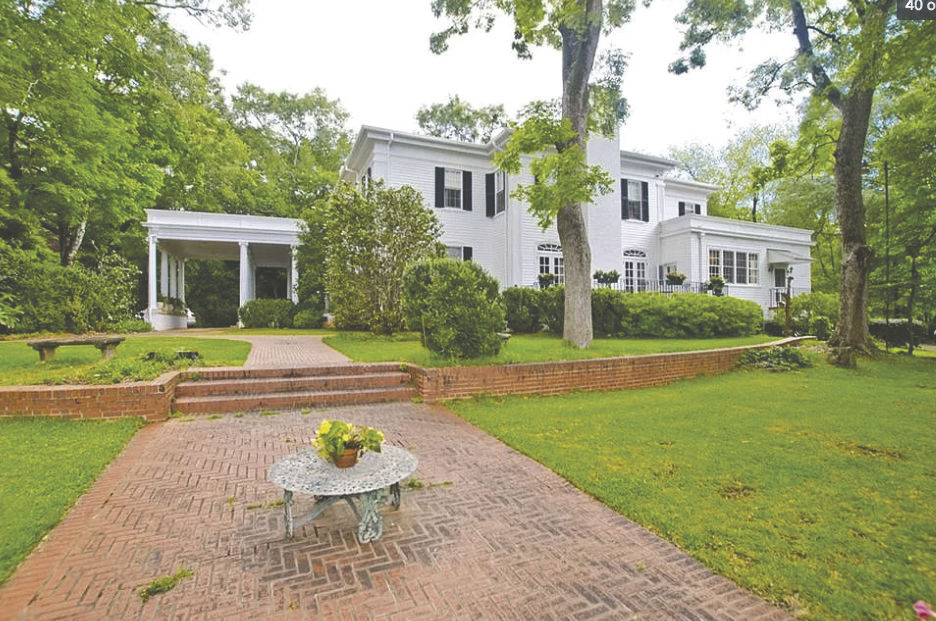 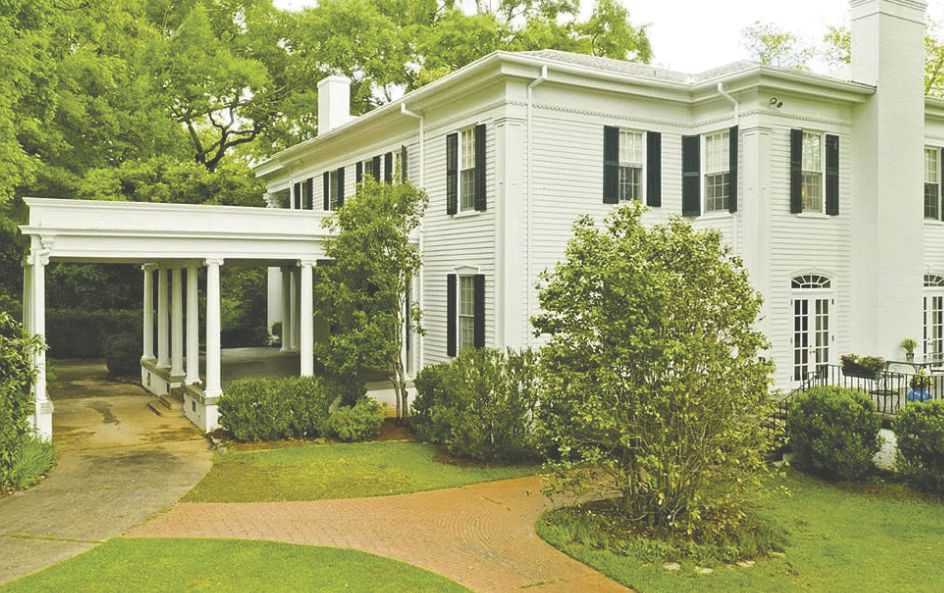 One of Forsyth’s most historic antebellum homes is on the market for the first time in more than a century.

Hil ‘ardin, the columned Neo-Classical 1836 home at 212 S. Lee Street, went on the market last week for $775,000. Perched on a secluded hill on 17 acres in the middle of town, the home includes Corinth columned front and side porches, an English sunken garden, 13 foot ceilings and 7 fireplaces. Monroe County historian Ralph Bass notes that the home has only been owned by two families in its 175 years, the Hardins and the Sharps. Here Bass shares that intriguing history:

Cyrus Sharp probably built the nucleus of the present home after he bought the property in the 1830s.  Sharp, a native of Maryland, came to Monroe County from Milledgeville, where he had built its brick jail, and here he established a store on the square on what became known as Sharp’s Corner.  His residence was hardly a notable one—except for its location.  Examination of the surviving portions and other evidence suggests that Sharp’s home was a two-story, eight room house.

He married in 1826 Frances Ann Crawford, the niece of Williams Harris Crawford, Secretary of the Treasury, minister to France during Napoleon’s last years there, and ill-fated presidential candidate in the 1824 elections when Crawford was suffering from paralysis attributed to an overdose of laudanum.  The Sharp family story is that Cyrus Sharp got the vision for this home while he was on his honeymoon in Boston.

From the Sharps also comes a story, printed in the Monroe County Historical Society’s “Family Histories of Monroe County Georgia,” that during the Civil War William T. Sherman and his troops camped on the property.  The story is patently false.  Sherman never came to Forsyth and a daughter in the home never married a determined Federal officer who told her, after she had spurned him, “After the war I am coming back and you will marry me.”  One of Cyrus’s daughters did marry an officer, but he was James Steptoe Pinckard, the heralded veteran of three wars—Indian, Mexican, and Civil—a native of Georgia and a local attorney.  His family had constructed a notable house, still standing, now at 219 Brooklyn Avenue.

In 1893, Cyrus Sharp died in his chair at 96 and the estate sold the property.  His son, Cyrus Henry Sharp—the name Cyrus is repetitive in the family—purchased the home, living there until his death in 1909.  Cyrus Sharp was a veteran of the Civil War who had lost an arm at South Mountain. He was elected Clerk of the Superior Court during Reconstruction and served from 1873 until his death in 1907 with the exception of one term.

The Hardin family’s roots in Monroe County are in Russellville, where they have lived since the antebellum period. About 1890 Thomas J. Hardin and his wife Rowena Madura Ferguson Hardin moved their family to Forsyth, where he established a mercantile operation that eventually included his only son Hugh. The firm of T. J. and H. H. Hardin sold dry goods, clothing, staple and fancy groceries, vehicles and harness. It prospered—and so did the fortunes of the family.

Hugh Hardin was particularly entrepreneurial. When a young man he owned the Hardin Buggy Company, which later became part of the McCommon Buggy Company in Forsyth

He was president of the Arnoldsville Trading Co, Whitehall Cotton Mills in Athens, the Forsyth Twine and Cordage Co., the Royal Crown Bottling Co. of Lumberton and Fayetteville, N. C., the Wakulla Boat Co. of Tallahassee and the St. Marks Towing Co. of St. Marks, Florida.

At one time he owned a telephone exchange in northeast Georgia. He had helped organize the Citizens Bank here in Forsyth and was its president for many years. In 1942 he was reputedly the president of more companies than any other man in Georgia.

With the advent of the automobile, he invested in the Speed Oil Company, which at one time had 45 gas stations in Georgia.

A lumberman, he owned about 35,000 acres of land in various counties in the state.  Some of the land was for growing timber; some was farmland; some was for raising cattle.  Hardin introduced Angus Aberdeen cattle in Monroe County and brought the Forsyth Packing Company to this town.

Hardin was particularly supportive of Tift College. He served as a trustee from 1914 to 1954 and after he left the board, he was its investment secretary. When the college finished constructing a much-needed library in 1954, it bore his family’s name.

In the early 1920s Hardin financed the public school system when tax revenues for education fell short. When the Board of Education sold bonds for the construction of Mary Persons High School, Hugh Hardin, not the Persons brothers, bought all of them.

After Hugh Hardin purchased the house, he and his wife, Katie Mae Arnold Hardin, consulted Dougherty and Gardner, the architectural firm with offices in Atlanta and Nashville. Edward Dougherty, who had studied at Cornell and the Ecole des Beau Arts, was responsible for the designs of the First Church of Christ Scientist on Peachtree Street in Atlanta as well as the Druid Hills Baptist Church in the same city.  His most famous design, coming some years after his work in Forsyth, was the Tennessee War Memorial in Nashville.

The result of the collaboration with Dougherty was an extensive expansion of the house, giving it a U shape with a kitchen section and a bedroom section forming the arms of the U.  The stone steps added at this time came from Mrs. Hardin’s native Oglethorpe County. Her father supervised their cutting in the quarry there.

The family tells the story that Hugh Hardin wanted the stairs moved back from the entrance hall area while the work was being done on the home. The contractor said that it could not be done, so Mr. Hardin did it himself.

After the death of her parents, Hazel Hardin Wright inherited the home and gave it a third renovation. With the guidance of the architectural firm of Matthews, Holliday, Couch, and Hollis in Macon, the Wrights reworked the house to accommodate the needs of their family. Perhaps the most significant addition was the library at the rear of the home. With its walnut raised fielded panels, it overlooks the terraced gardens at the back of the house.

Landscaping on the property is the work of John Leon Hoffman, the landscape architect responsible for the earliest work at Callaway Gardens. He also laid out the Shirley Hills section of Macon, when it was being developed.

In 1979 the home gained a listing on the National Register of Historic Places.

At the turn of the 20th century, the Forsyth banker Banks Stephens said that Cyrus Sharp would not take $15,000 for his home.  That property went on the market this week for $775,000. The home is listed by Sister Hood of Harry Norman Realtors.