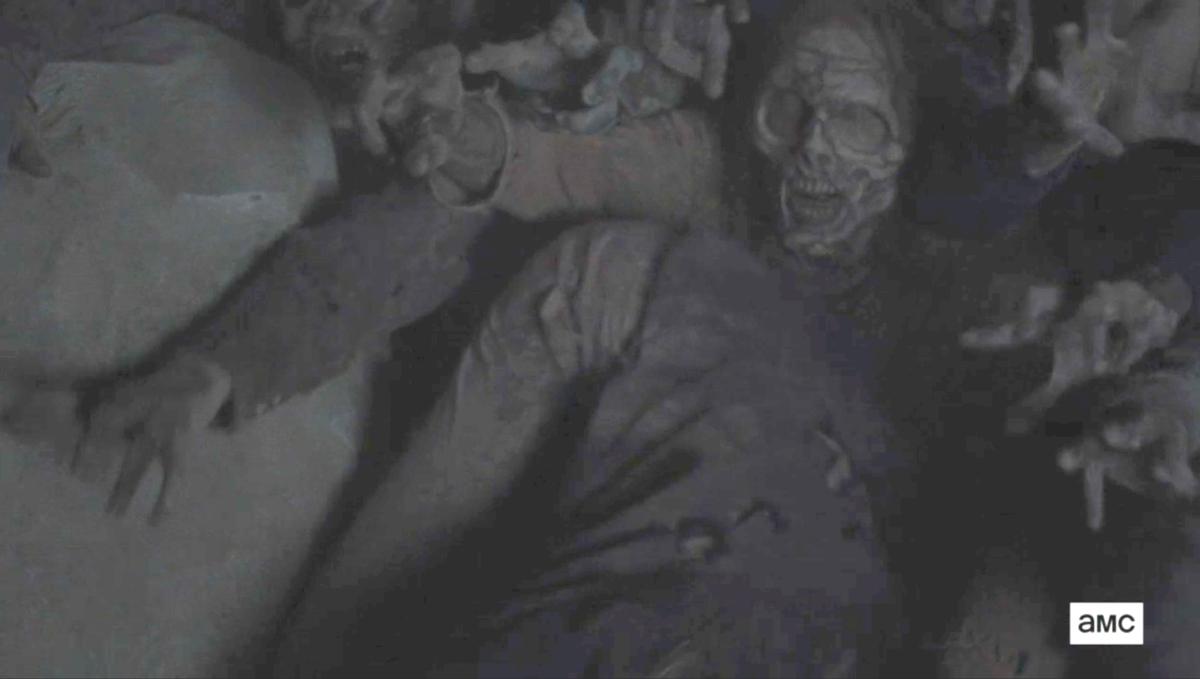 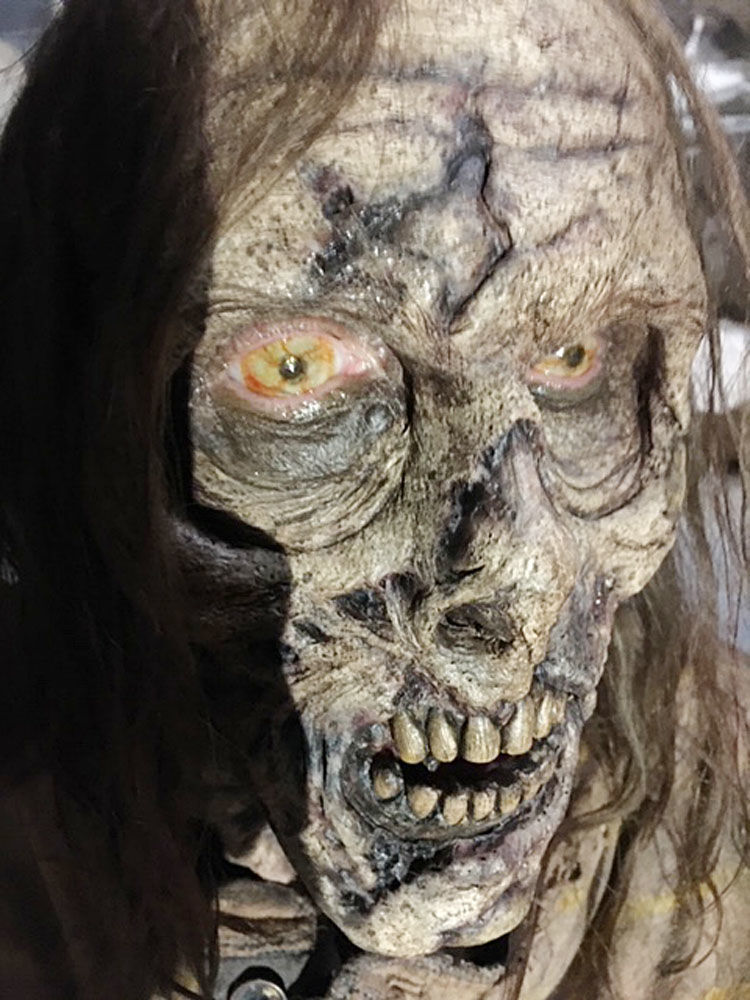 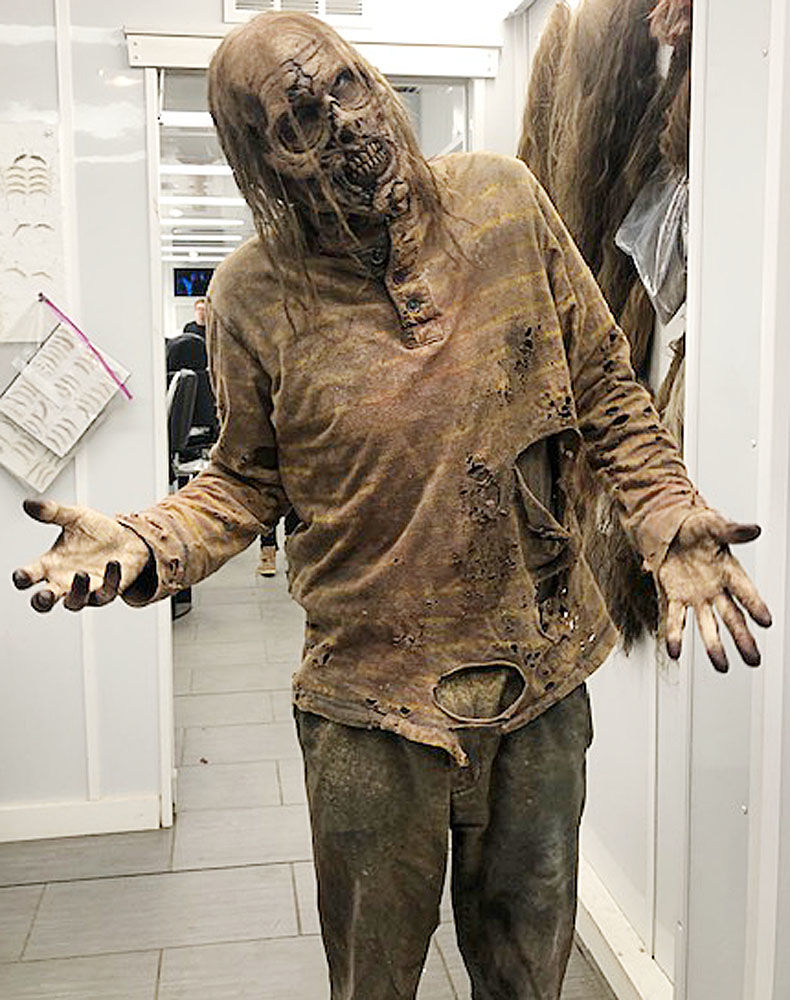 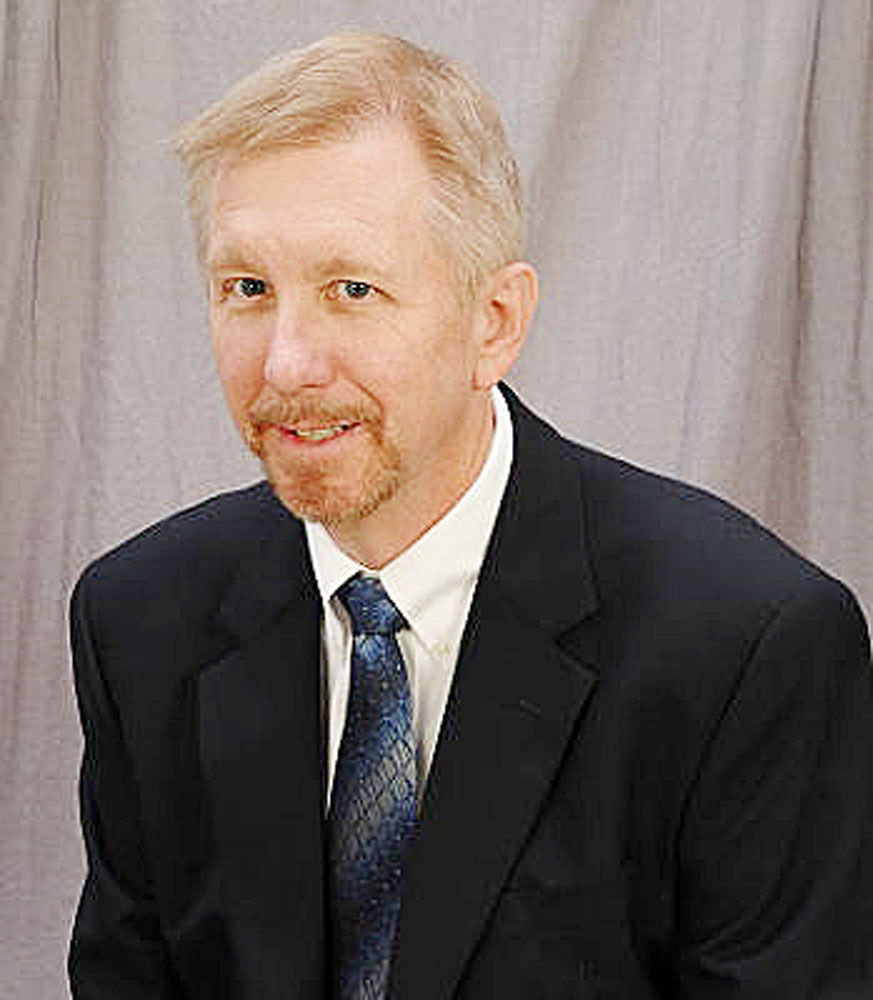 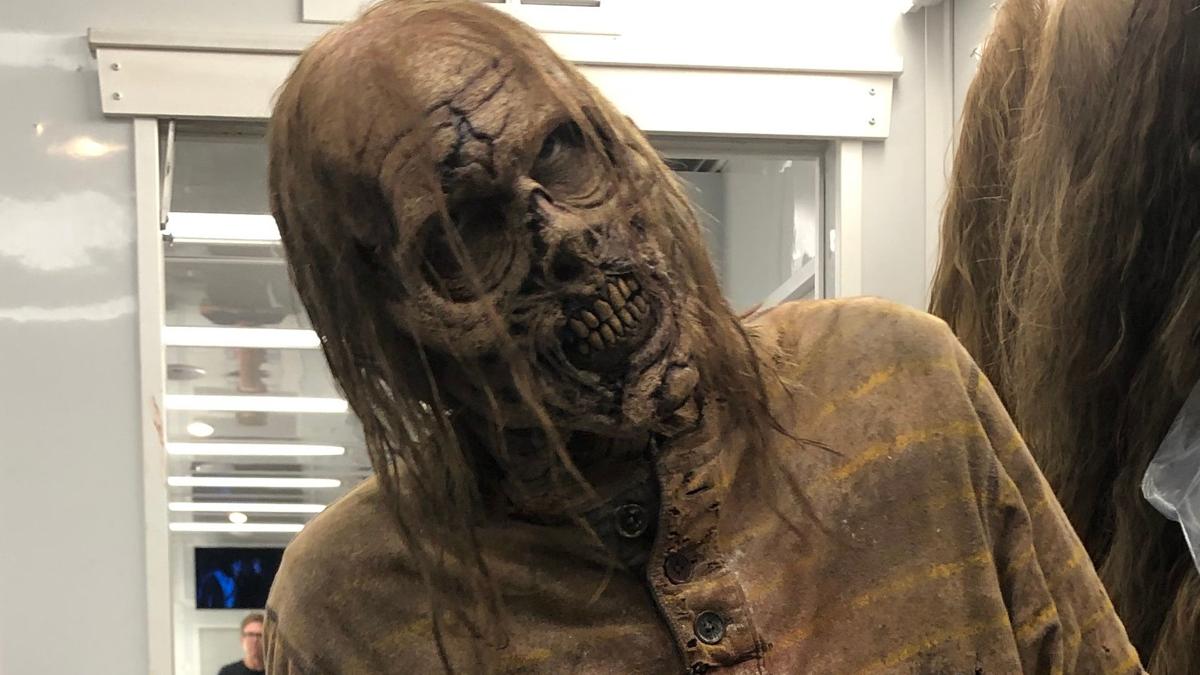 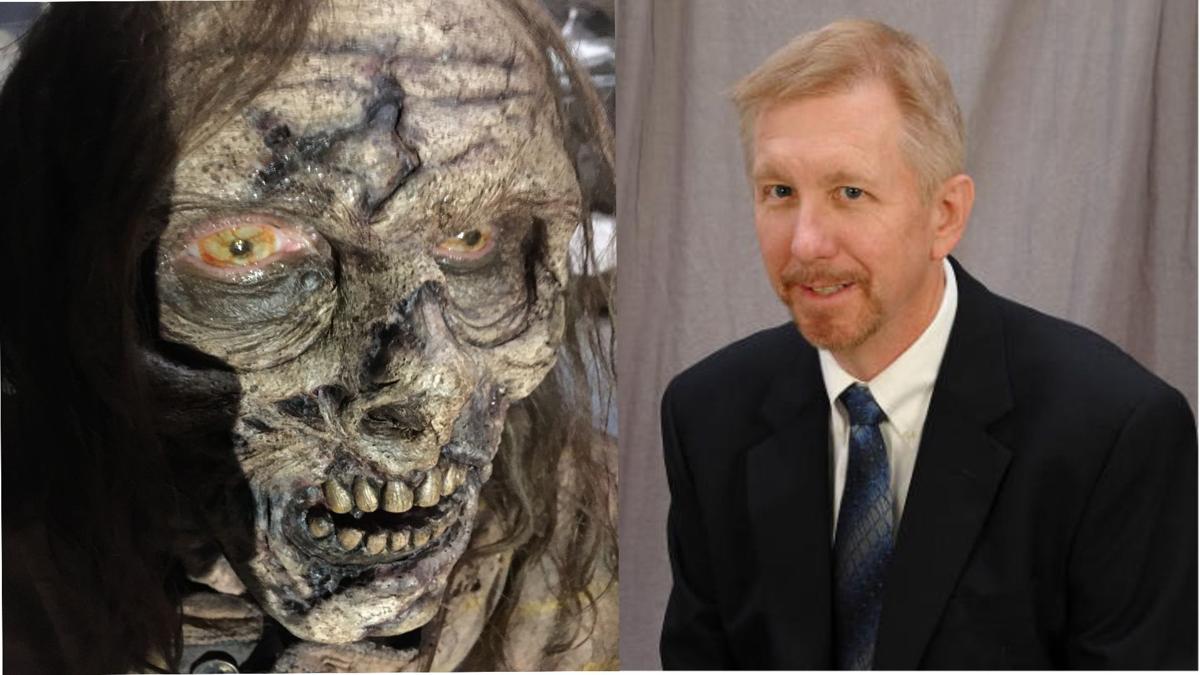 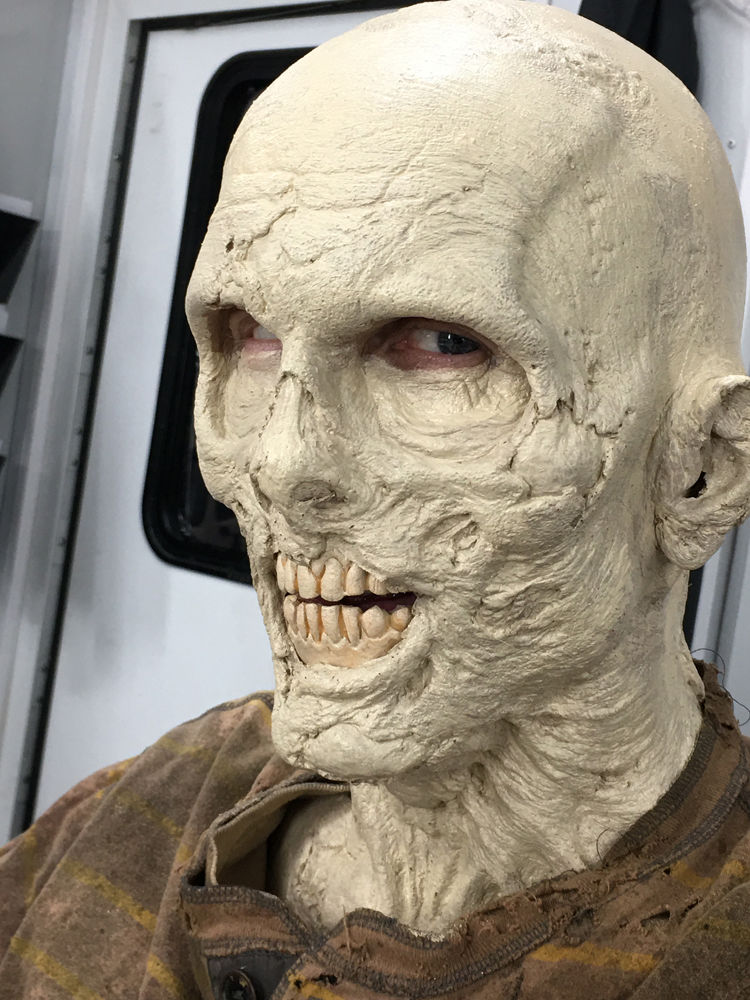 Forsyth has its own “Walking Dead” zombie. At least local optometrist Dr. Lyle Lastinger was a full-fledged ‘hero zombie’ on the popular television series for one day. The segment in which he appeared aired about two weeks ago in an episode of the “Walking Dead’s” 10th season.

This is the first time Lastinger has been in front of the camera in the drama, but he has been an important part of the team that puts the show together since about 2014. He was a fan of the show before then and thought someone who knew that was pranking him when he answered a call one day while driving home. When the caller said he was a producer from “The Walking Dead” Lastinger hung up.

He was surprised the next day when he arrived at his office and was asked whether he got the call from the producer who needed an optometrist for the show. It turned out that a former employee recommended Lastinger to the producer. Luckily, like the zombies who just don’t give up, the producer called back. That began Lastinger’s connection not only with the “Walking Dead” but with a number of series and movies filmed in Georgia, particularly at Marvel Studios.

As optometrist “to the stars” Lastinger fits the contacts that create those strange eyes seen in the zombies. Members of his staff stay on the set with eye drops and other aids to make those contacts more comfortable during long hours of filming, and Lastinger is on call to treat any eye injuries or problems that cast members suffer. He explained that the active nature of the scenes in “Walking Dead” lends itself to eye injuries, usually from actors poking each other in the eye. Recently he treated an actor who got poked in the eye while filming an underwater scene.

As well as working with “The Walking Dead” seasons 6-10, he has been optometrist for “Guardians of the Galaxy 1 & 2”, “Legacies” seasons 1 & 2, “Black Panther,” “Fear Street,” “Swamp Thing,” “Doom Patrol” and some other productions yet to be released that are closely guarded secrets at this point. Besides the successful productions, like “Walking Dead” that has been renewed for an 11th season, Lastinger has also worked with a number of productions that haven’t made it.

After all the years working behind the scenes, Lastinger decided it was time to put his face (and body) in front of the cameras. When he asked the producer if he could be in an episode of “The Walking Dead,” he said, “You really don’t want to do that.” When Lastinger responded that he did, the producer said he would work it out.

Lastinger said at one time there was a Zombie School that want-to-be zombies attended before they were allowed to audition for on-screen parts. He was able to by-pass that for “on the job training.” He said he didn’t get much direction about what to do or what to expect before he got on the set.

He was a ‘hero zombie,’ one of the ones who get special make up and prosthetics for close-up shots. That meant he got to wear those hideous contacts he had been fitting for others. He said there was only one pair of contacts left when it was time for him to get his; he said, “I can stand it.” But when wardrobe issued his zombie shoes, he saw he had two right feet and asked, “Is it supposed to be like this?” Fortunately that was a mistake and was corrected.

Lastinger learned one of his first lessons on the set when the director said, “Cut! I can see the doctor’s cell phone,” and knew he was talking about him. Another memorable moment came when the director told him to bend his fingers so they wouldn’t get broken when he was kicked, and he knew he was probably going to get kicked.

Lastinger said overall being a zombie was a lot of fun, but it was amazing that it took eight hours for a scene where he was on screen for a few seconds. He was glad that he made it on screen at all because he knows there are a lot of camera angles and cutting that could have eliminated him. It was interesting to see the result on television and compare it to his perspective during filming. His segment was shot in the dark to get the feel of a cave. He enjoyed seeing it all come together. Now he can say he got paid for being a zombie, and the food on the set was really good.

Lastinger has been an optometrist for over 30 years. He lives in Monroe County and one of his Vision Saver offices is located at 134 Martin Luther King Jr. Drive in Forsyth, near Monroe County Hospital. He also has offices in Barnesville, Thomaston and Warner Robbins. He said he will show a picture of himself as a zombie to his children patients and ask if it looks like him. They always answer “yes.”

One thing that has impressed him about working with film productions is how much security and protection of the story there is before the film is released. He said he goes through two locked gates before getting into the studio and always feels like saying, “I just gave you all my identifying information a few minutes ago!”

He said it has been interesting working with recognizable names in the film industry and seeing their personalities. Some will complain a lot about the contacts, which really aren’t comfortable, and others will just deal with them. He said some of the main actors in the films will come to his Barnesville office because it is closest to the filming in Senoia but others come to Forsyth because of the easy access from I-75. After they get to know Lastinger they often come to him about eye infections and other needs for an optometrist.

Working with “Guardians of the Galaxy,” he made glasses for Dave Bautista, who played Drax the Destroyer. He said Bautista, a retired WWE champion wrestler, martial artist and body builder, is a huge man but is very nice and talks like Mr. Rogers of children’s television fame.

Lastinger said he was working with an actor toward the end of filming “Guardians of the Galaxy” when his special effects contacts become really “goopy” and uncomfortable. Ready to finish up, the producer said they would use computer graphics to put in the eyes. Lastinger asked why they didn’t do that all the time instead of making actors wear contacts and paying him. The answer was that it is very expensive to create the eyes digitally, more than the cost of the contacts, which cost $1,000 each besides the fees for Lastinger and members of his staff who attend to the actors wearing them.

Lastinger said working with the film crews has changed his life, making him feel a part of the team. Asked whether he wants to be in front of the cameras again, he said he is waiting for the “critical review” of his brief performance. He said “The Walking Dead” is still the Number 1 show on cable, even as it finishes its 10th season. He is anticipating the wrap up at the end of the season when they may flash his performance on the screen and say “credits to our eye doctor.”

Meanwhile he continues to work with film crews, guessing at which production will be a blockbuster, and to serve all of his patients in Forsyth and around Middle Georgia.