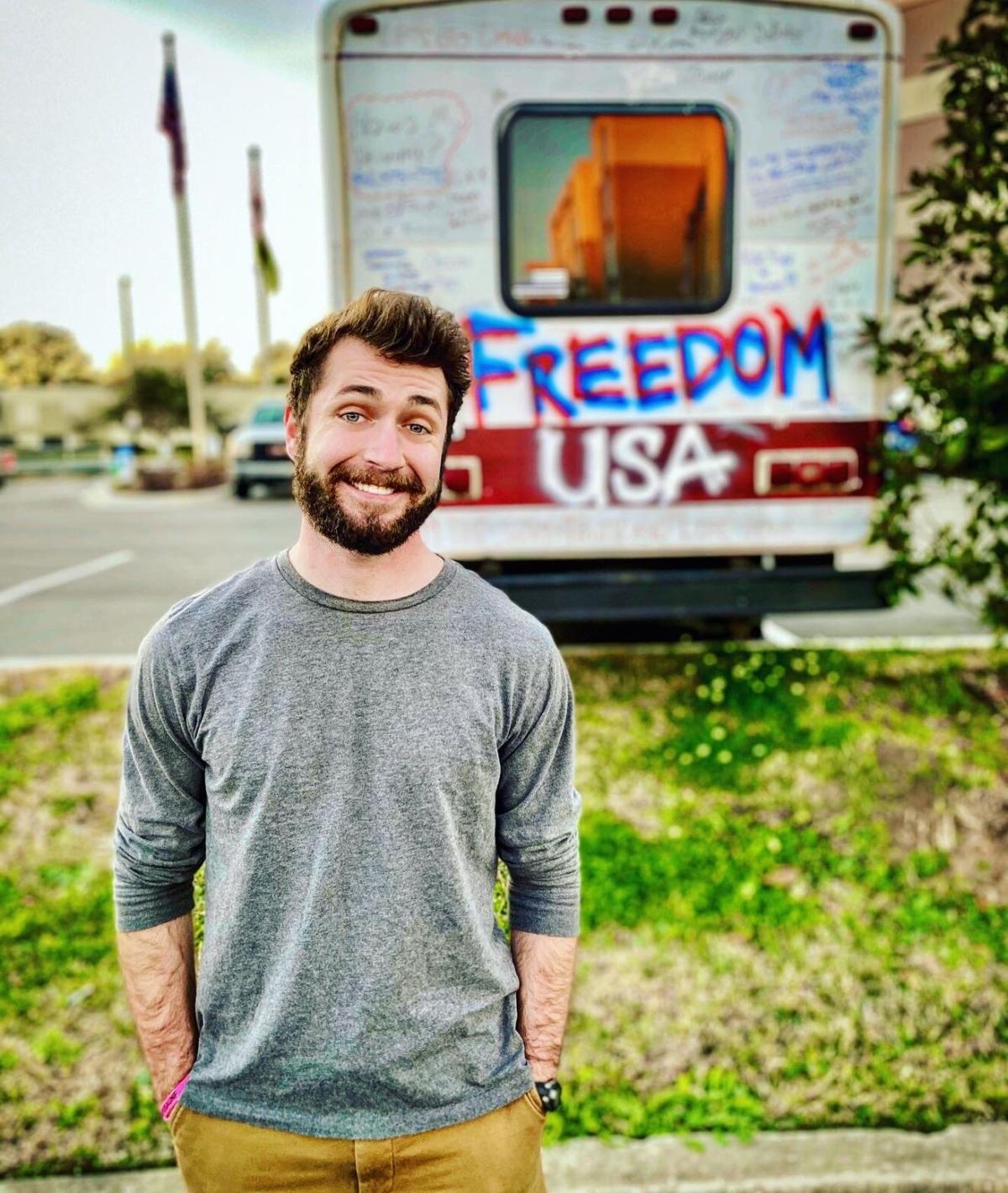 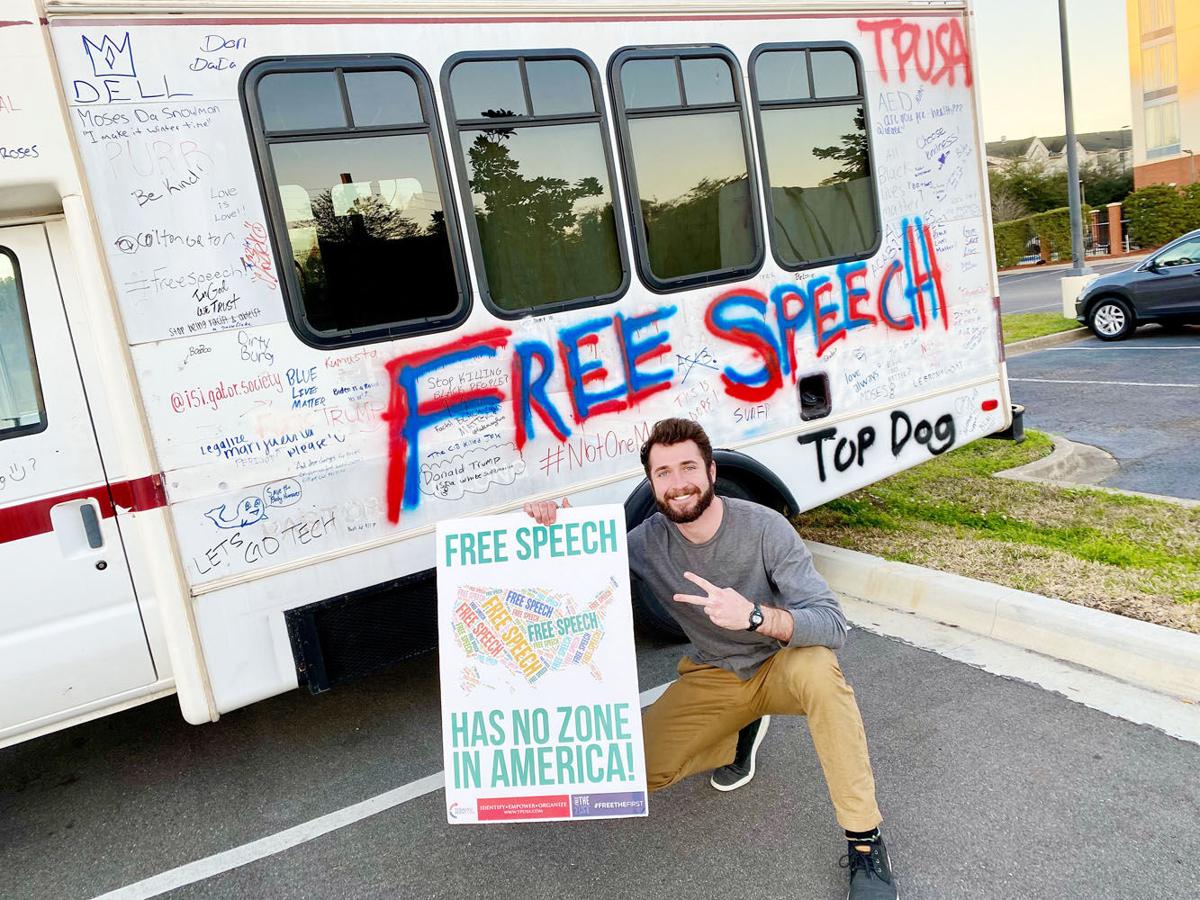 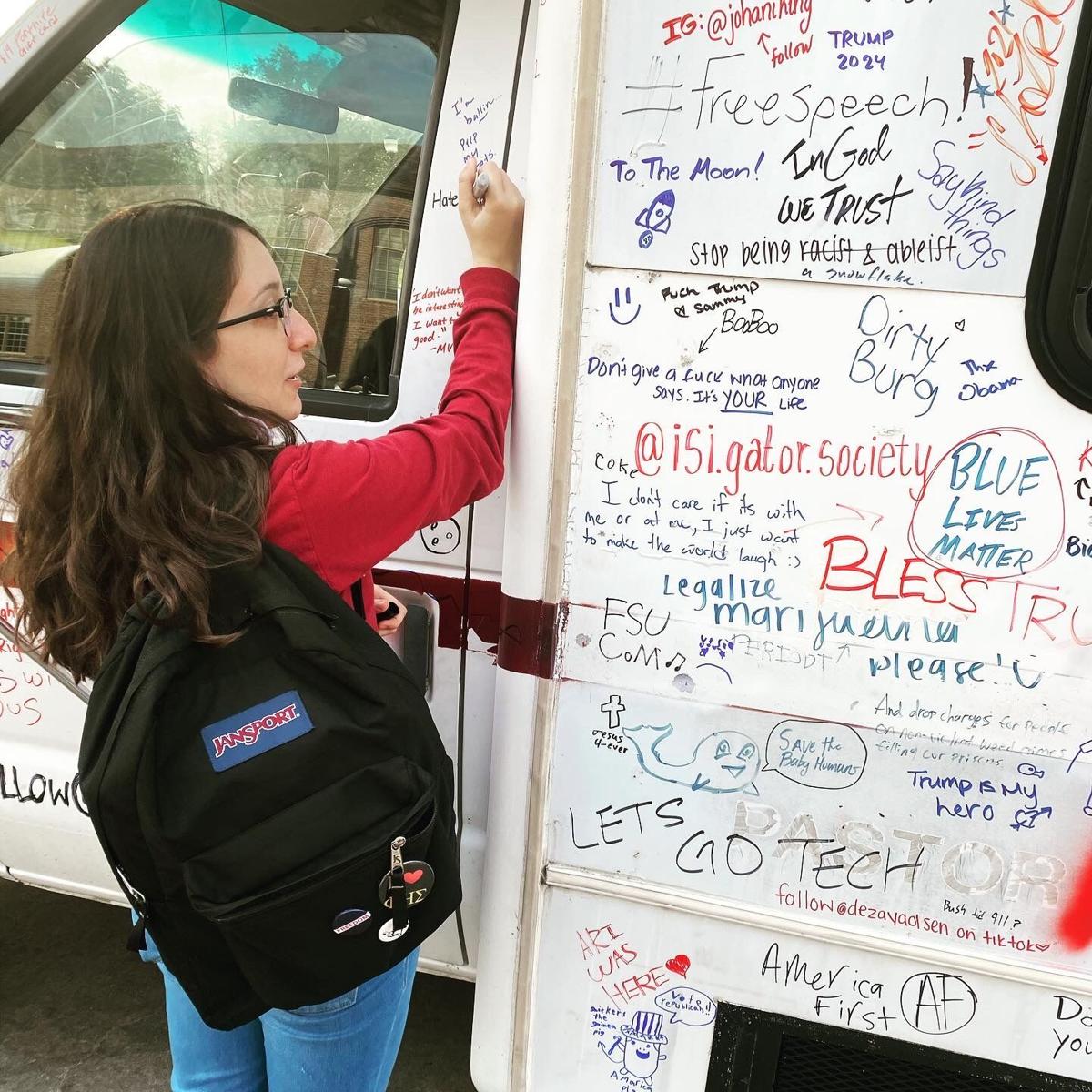 Browning Sandusky, a Monroe County native, has been traveling to various college and high school campuses across the South East these past couple weeks in a makeshift “free speech bus”, which he hopes will change the hearts and minds of young people at universities.

The idea first came about after Sandusky got into a motor vehicle accident and totaled his car. Near that same time, Sandusky’s landlord called and told him he had to move out. So, instead buying a new car with the insurance he accrued from the wreck, Sandusky decided to get a bus and turn it into a livable tiny home. At the time, Sandusky was living in Florida and involved with “Turning Point U.S.A.”, a conservative non-profit that does on-campus outreach.

“I needed a place to stay and a vehicle to drive, so I decided to knock out two birds with one stone.”

The idea for the free speech bus came from an activity Turning Point would do on college campuses, where Sandusky and others would inflate a giant beach ball, roll it around campus and get students to write on it in promotion of free speech. Sandusky thought, ‘why not do the same thing with a free speech bus’?

“The bus was in need of a paint job anyway. I bought some spray paint and sharpies and just let everyone paint the bus for me.”

Sandusky spray painted “free speech” on the side of the bus, started an Instagram account (@free_speech_bus) and began the tour. So far, Sandusky has been to the University of Florida and Florida State, as well as one home school group.

“Eventually when it gets full, I’m just going to paint over the whole thing and start over. I’ve been to two campuses so far and it’s already super full. I just pull up in the middle of campus and as people are walking by, ask if they want to write something. Some people say no but most say yes, and they write whatever they want. Then I’ll say do you love America? Have you heard of turning point U.S.A? I give them a pitch and try to recruit them to the group. Most of the time they’re like yeah, let’s do it!”

Turning Point USA is a national student organization that promotes free speech, limited government, capitalism, the constitution, and a lot of economic conservative principles. The organization is now trying to branch out beyond college campuses and recently started touring high schools and home school groups as well.

“They get young people involved in civics and the political process. They educate them and try to introduce them to other conservative organizations.”

Sandusky says college campuses can be very liberal and he’s encountered his fair share of pushback from students and faculty. While he’s gotten into some heated conversations with students, none have gotten physical.

“We’ve had people rip up our flyers and other stuff. We can always get more, and we video them when they do. Faculty have tried to get us off campus but with the bus, it’s promoting freedom of speech so they can’t really say anything. They’ve tried to make it about illegal parking, masks and other bylaws.”

Sandusky grew up homeschooled in Monroe County, where his parents Donna and John regularly encouraged him to get involved in politics. Sandusky volunteered for years with different campaigns and political organizations until eventually getting involved with “Convention of States”, where he took on more of a leadership role. One day, Sandusky got an email asked him to get involved with campus activism, which eventually led him to Turning Point. Though Sandusky had only planned to take one gap after high school, he’s now in year four and seems to have no plans of stopping anytime soon.

“Turning Point was the most my speed. I loved what they were doing on campuses and they seemed to be very effective at recruiting people. They’re like the spearhead of conservative activism on campuses now. I want to see people’s minds changed. I want people to value the principles that make America so cool and free. People see free speech and just assume that it’s a right-wing thing, but then come up and see left wing stuff on the bus too. So, it makes them feel like we can actually have a conversation instead of yelling at each other on Facebook.”

Sandusky, like many others, feels that freedom of speech has been under attack for years now at colleges and universities in the U.S., with “free speech zones” and grades being docked based on world view. Many of these universities have become predominately liberal in their philosophy, which tends to outcast conservative students. Sandusky hopes to make it “normal” and “cool” to be conservative again.

Next on his free speech tour, Sandusky pans to head to Jacksonville. Eventually, he hopes to do a national tour to different universities across the U.S.

“Everybody loves it so far. I’m already getting messages asking me to come to this university and that university. I’m excited to keep touring, meet new people and hopefully change some minds.”