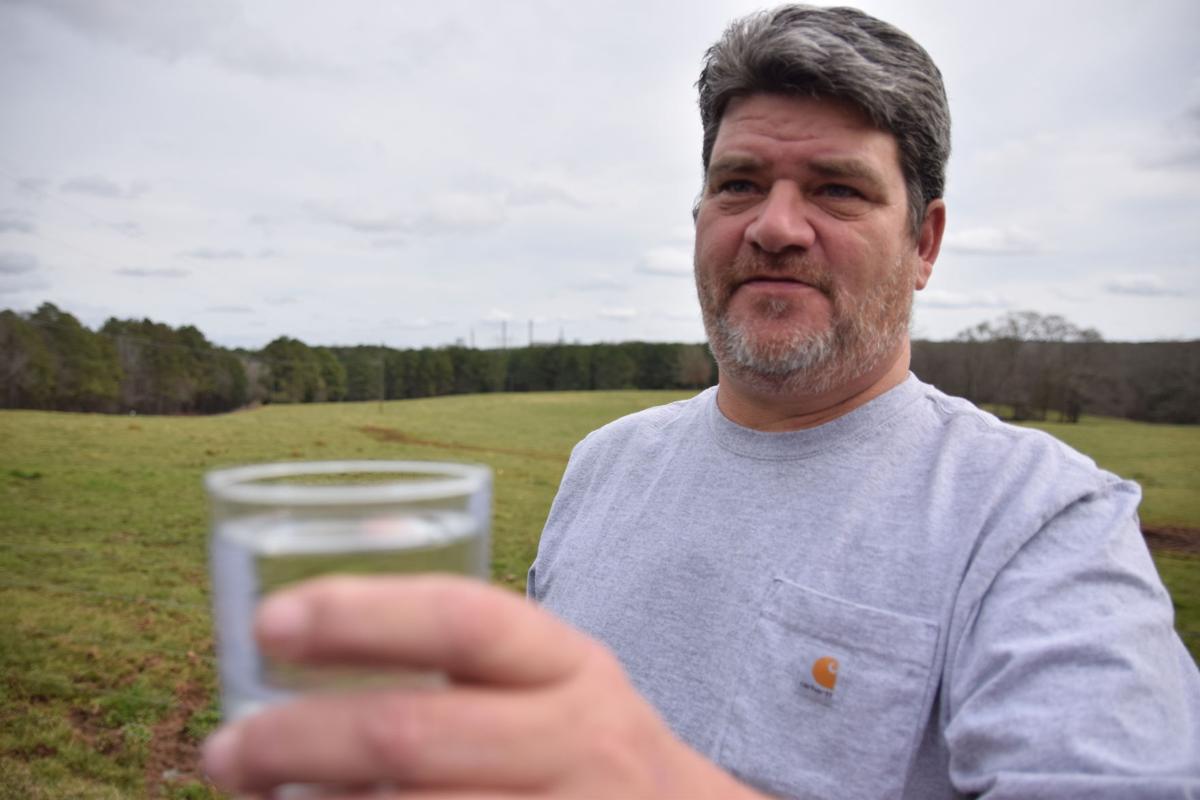 Karl Cass holds a cup of the well water he no longer drinks at his home in the shadow of Plant Scherer (rear). 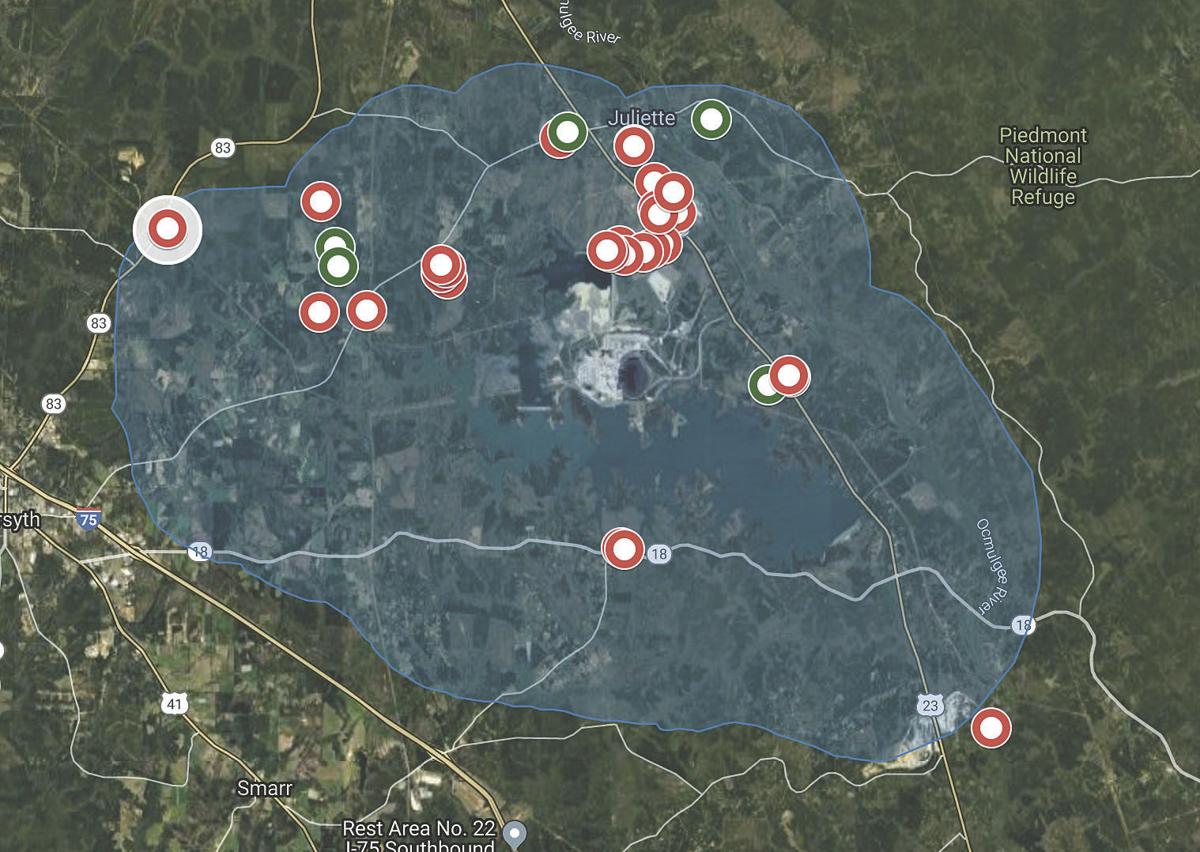 This map from the Altamaha Riverkeepers marks wells in red that tested for high levels of contaminants and green for wells that did not. 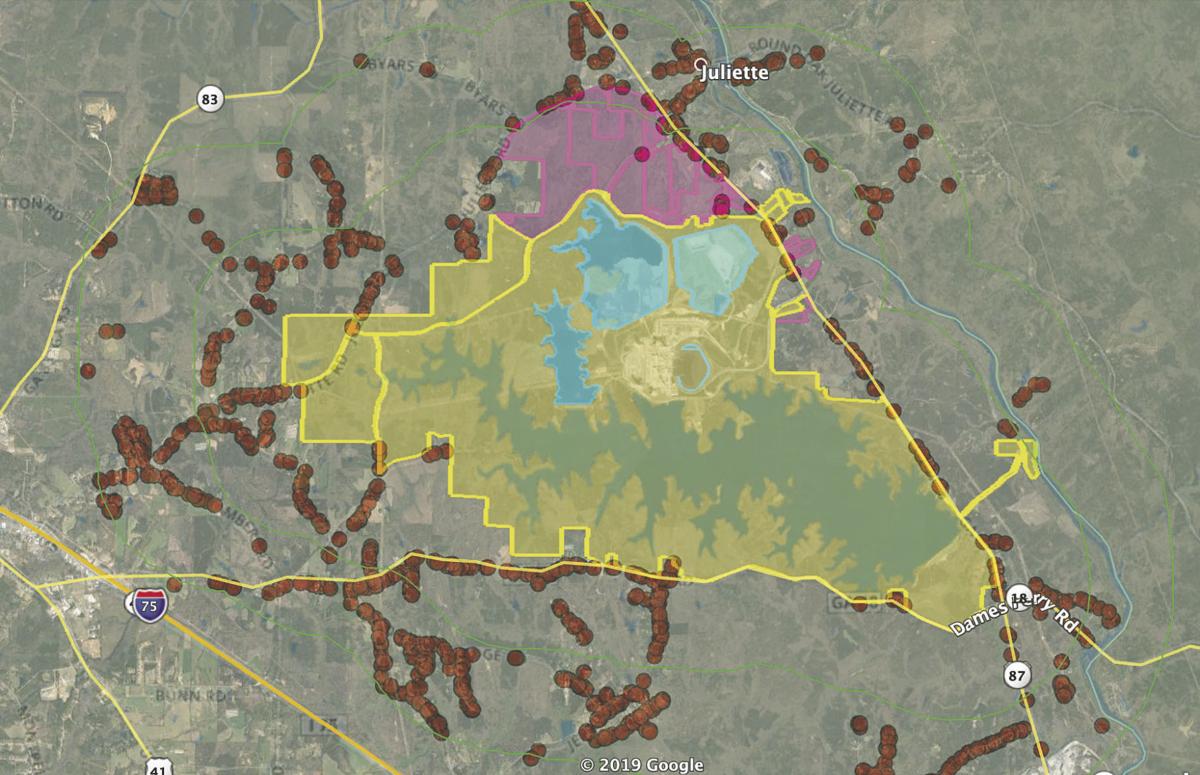 On this map created by Fletcher Sams of the Altamaha Riverkeepers, the red dots represent the 1,007 homes within two miles of Plant Scherer. The yellow area is the original plant property, and the purple areas show property purchased as a safety buffer for the coal ash ponds from 2008-2018. The green rings are the 1 mile and 2 mile radius of the plant property.

Karl Cass holds a cup of the well water he no longer drinks at his home in the shadow of Plant Scherer (rear).

This map from the Altamaha Riverkeepers marks wells in red that tested for high levels of contaminants and green for wells that did not.

On this map created by Fletcher Sams of the Altamaha Riverkeepers, the red dots represent the 1,007 homes within two miles of Plant Scherer. The yellow area is the original plant property, and the purple areas show property purchased as a safety buffer for the coal ash ponds from 2008-2018. The green rings are the 1 mile and 2 mile radius of the plant property.

Monroe County residents concerned about health issues surrounding Plant Scherer are invited to the second of two public meetings with attorneys and the Altamaha Riverkeepers at 6 p.m. on Thursday, Feb. 6 at Forsyth Presbyterian Church.

The meeting comes amidst a furor in Juliette after an article detailing health and well water woes in the area at www.grist.com went viral. The article detailed the efforts of Fletcher Sams of the Altamaha Riverkeepers to test private wells around Plant Scherer, with results showing high levels of contaminants, including chromium, which has been identified as a cancer-causing agent. Sams said 86 percent of the wells he’s tested so far around Plant Scherer show troubling levels of hexevalent chromium.

Chromium occurs naturally in the environment. But Sams said if this was naturally occurring chromium, the tests would show high results for both chromium 3 and chromium 6. But most wells are testing for high levels of just chromium 6, at levels 500 times higher than what’s considered safe in California, said Sams.

Sams says that wet coal ash, a byproduct of burning coal to fire Plant Scherer’s generators, is seeping into the groundwater creating an environmental hazard.

Sams said the wells closest to the plant have the highest contamination, and the worst one he’s seen was on Hwy. 18. Wells further from the plant show less contamination, said Sams, evidence that it’s the source.

Sams said he’s been inundated with calls from nearby residents asking to have their well tested after the article went viral earlier this month. The Riverkeepers are doing the testing, which costs about $300, for free. Sams is focusing on the 1,007 homes located within two miles of the plant.

Sams said he’s glad Plant Scherer and all coal plants nationwide are converting from wet ash storage to dry ash. The federal government moved to phase out ash ponds after a dyke broke at a Knoxville, Tenn. power plant in 2008, sending a coal ash pond spilling into the Emory River.

But Plant Scherer plans to keep its wet coal ash in unlined ponds on the plant property. Sams said they’re asking the state to reject Georgia Power’s conversion plan and instead force it to dig up all its wet ash, estimated to be enough to fill 4,700 Olympic pools, and put it in lined landfills to protect area wells. Sams said they’re also supporting bills in the Georgia legislature that would require lined storage for coal ash to prevent it from leaking into area wells. Sams said that the state requires even landfills for household garbage to have a liner, so why not those for coal ash?

Gini Seitz lives on nearby Woodland Way and her youngest daughter Kylie still limps after an otherwise successful bout with cancer. Seitz has had family members to work at Plant Scherer, and said she just wants Georgia Power to do the right thing.

“I’m not trying to shut them down,” said Seitz. “I’m not accusing them of causing Kylie’s cancer. I just want them to close the ash pond in a way that’s good stewardship for our future. They should’ve put a liner in the pond when they built it.”

Sams said installing lines for the wet ash makes sense because Georgia Power is doing that for its wet ash at the now closed Plant Branch, the former coal plant in Milledgeville.

Seitz said she also wants Georgia Power to pay to extend county water lines or provide another source of water for those whose wells are affected by toxic chemicals. Seitz said she quit drinking her well water before she bought her mom’s house across the street from her five years ago. She said out of 10 homes in her neighborhood, residents in nine of them have had some kind of cancer.

Former Democrat gubernatorial candidate and attorney Stacey Evans is expected to be on hand at Thursday’s meeting as the parties consider re-starting a class-action lawsuit that had been filed by neighbors in DeKalb County Superior Court. The neighbors dismissed the suit in 2013 but can reopen it.

Seitz said she hasn’t decided whether she’ll participate. Seitz, her brother Karl Cass, and other area residents including Mike and Teri Pless, Andrea Goolsby and Pam Wolff are helping Sams go door to door to do more well tests.

Sams said after the tests are completed, Emory’s Department of Public Health will do a health survey to determine what issues the area is having.

For its part, Georgia Power has dug numerous wells on its property for testing and has said all those wells show no contamination or unlawful elements.

The Monroe County Development Authority has issued $100 million in bonds for Plant Scherer to close its ash pond. Plant manager Doug Howze told the authority in May that it is adding a conveyor belt and silos to start storing and selling dry ash instead of putting it into a pond. Meanwhile it’s building a water treatment plant to clean the plant’s 550-acre ash pond. Howze said there are an additional 450 workers on site as part of the ash conversion project and the work is expected to take at least 10 years. Complying with the new regulation will cost Plant Scherer owners $250 million, but Howze said it will also create a new stream of revenue because there’s lots of demand for so-called fly ash to use in asphalt, hardy plank and other building materials. And with fewer coal plants around, Howze said that means Scherer’s ash is even more valuable.

The company has also noted it has spent billions of dollars on environmental controls at Plant Scherer, including a $3 billion project completed four years ago to reduce mercury emissions. Georgia Power says the plant is now the most advanced coal plant in the world in terms of environmental technology.

Plant Scherer is far and away the county’s biggest taxpayer, paying more than 40 percent of the taxes to the county government and school system, and is the largest private employer.