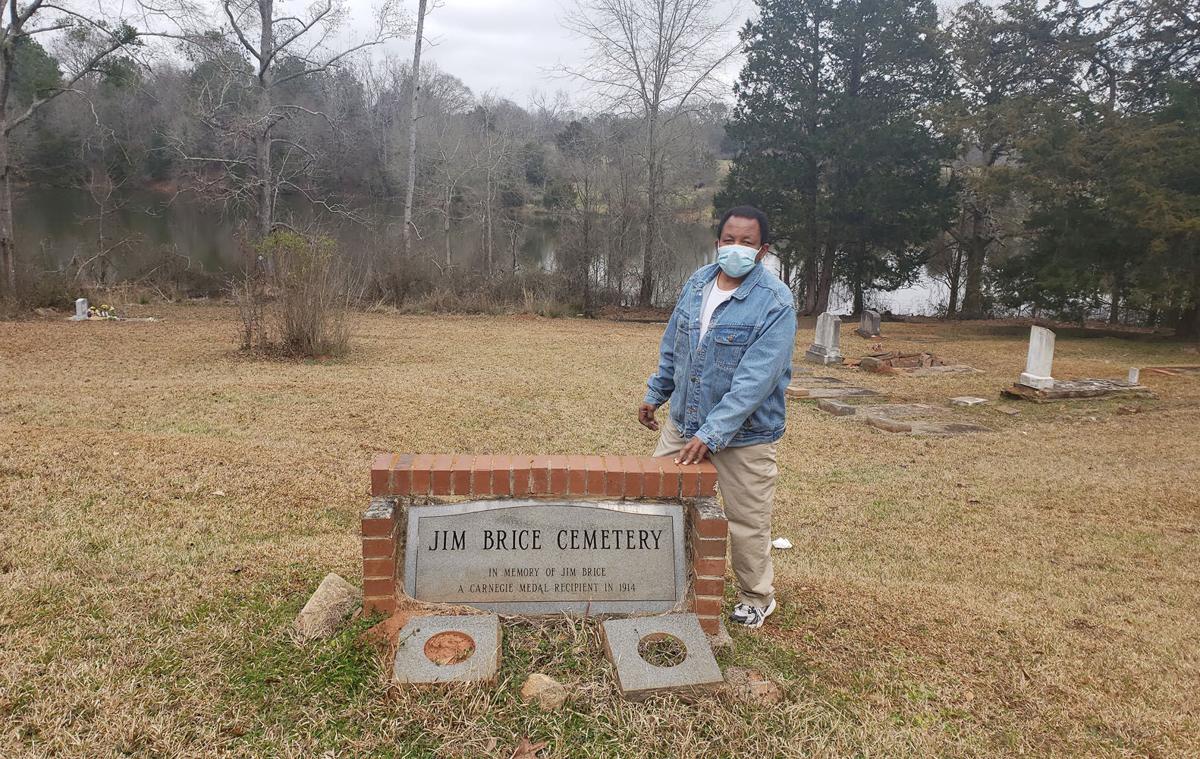 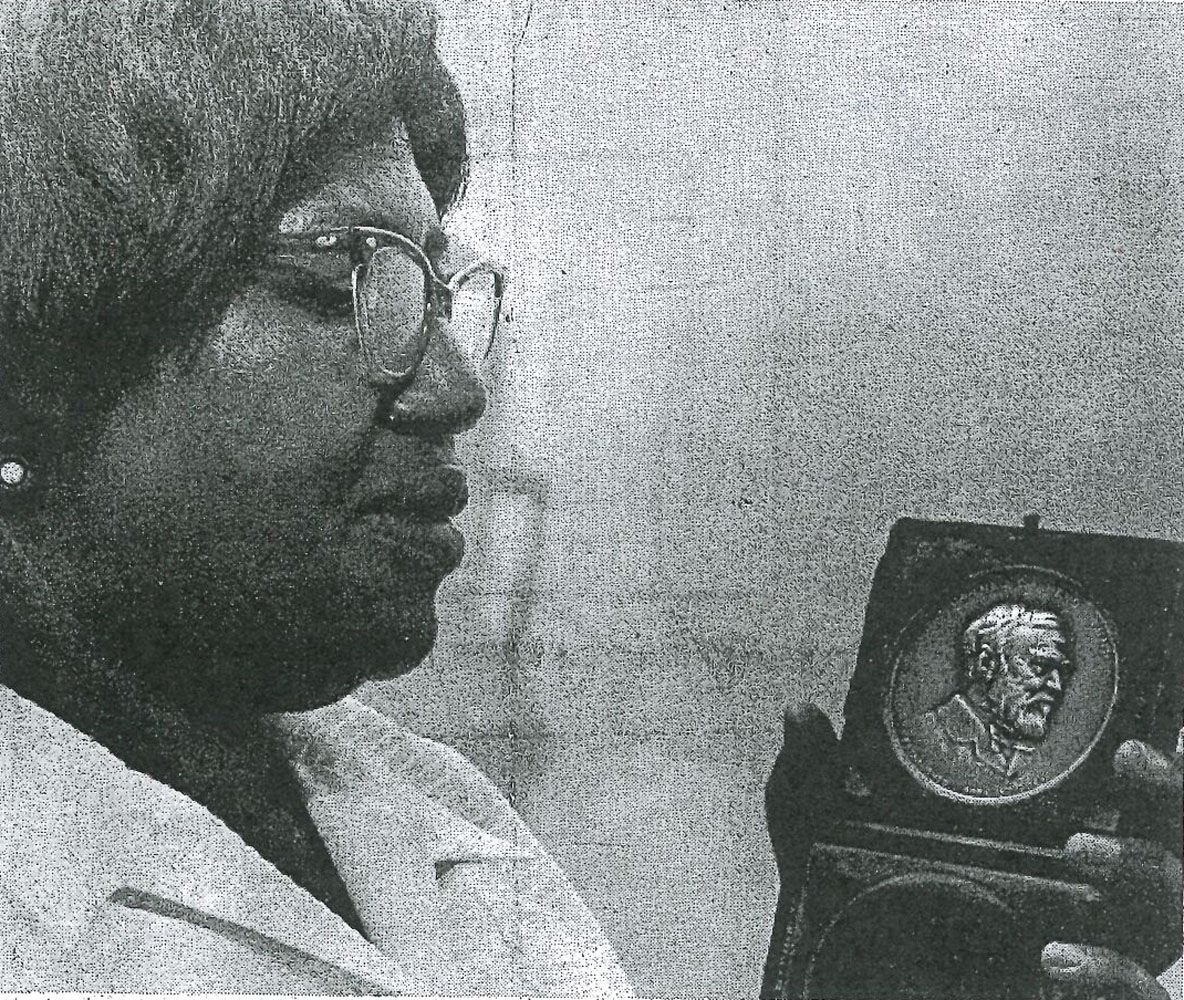 Emmitt Brice of Culloden is the great grandson of James Brice Sr., who received the Carnegie Hero Medal in 1914. The prestigious medal is presented “to individuals in the U.S. and Canada who risk their lives to an extraordinary degree saving or attempting to save the lives of others,” according to the Carnegie Hero Fund website.

The site gives the stories of each of the 10,202 heroes it has honored since it was established in 1904. This is what it says about James Brice Sr.:  James W. Brice, Sr., attempted to save James Jones from suffocation, Culloden, Georgia, October 20, 1914. Jones, 34, laborer, was overcome by carbon dioxide in a well 40 feet deep. Brice, 48, laborer, who was blind and had only one hand, volunteered to go down to tie a rope around Jones. Two men lowered him into the well. Brice remained in the well about five minutes without succeeding in tying Jones, then the men above told him to come up. Brice sat on a bucket on the well rope and was hoisted. He was somewhat dizzy. Another man descended and got Jones, who was revived after an hour's work by a physician.

It is hard to imagine how a blind man with one hand would have the courage to go down a 40-foot well filled with carbon dioxide. Emmitt Brice, 70, now has the medal that is a huge source of pride for his family and the Culloden community.

His aunt, Lula Brice Williams of Culloden, became the keeper of the Carnegie Hero Medal, after James Brice, who was known as “Uncle Jim,” passed away. She gave it to Emmitt, the son of her baby brother, before her death, and he has passed it on to his son, Emmitt Jr., for safe keeping. Lula, who Emmitt knew as “Aunt Daught,” also gave him a clipping from a Monroe County paper in about 1973 that tells the story of Jim Brice.

She said that her grandfather lived with her family and took care of the eight children while her mother and father worked. When he was in his 40’s, Jim was working on the Haygood farm in Culloden and lost one of his hands and much of his sight in a dynamite explosion. After that he made his living cutting wood by hooking an old handsaw over his shoulder since he had no hand to hold it.

He was working on the Haygood property a few years later when he went down the gas-filled well to help a fellow worker who was trapped and was eventually saved because of him. Lula remembered that Jim received some money along with the medal, which is inscribed, “Greater love hath no man than this, that a man lay down his life for his friends. Awarded to James W. Brice, Sr., who attempted to save James Jones from suffocation. Culloden, Ga., October 20, 1914.”

Lula said Jim kept the medal in a little cigar box under his bed and kept it polished. She said he would put the eight children to bed and then reach down to put his hand on it every night before he went to sleep. Lula said Jim believed in God and she read the Bible to him since he couldn’t see to read it.

The article quotes a local newspaper at the time of Jim’s death in 1953, when he would have been about 87 years old, “His philosophy of life was good, he accepted life as he found it. He was faithful as long as he was physically able. He will be missed by his family and friends.”

There was a death notice in the “Colored” section of the Atlanta Constitution that read: Nov. 19, 1953 Mr. Jim Brice Sr. The friends & relatives are invited to attend his funeral. From St. Phillip’s AME Church. The Rev. J.C. Hawkins will officiate. Interment Culloden Cemetery. Neal’s Funeral Home, Thomaston.

The cemetery where he is buried, across the street from King Hill Cemetery, is known as Jim Brice Cemetery.

Emmitt doesn’t remember Jim, since he would have been only about 3 years old when he passed away, but he is proud of his legacy. He feels honored that his aunt entrusted the medal with him. He fondly remembers her bringing him and the other children sweet rolls from the Mary Persons cafeteria where she worked for many years.

Emmitt lives near the cemetery with his wife, Louise. They have three sons, who now live in Warner Robins, Thomaston and Barnesville.

The Carnegie Hero Fund Commission was founded in 1904 by Andrew Carnegie and is based in Pittsburgh. Considered the highest award for civilian heroism in the U.S. and Canada, it presents awards four times each year and, as of December 2020, had awarded 10,202 medals, many of them posthumously. Recipients have been selected from over 100,000 nominees. The Commission has awarded more than $42 million in one-time grants, scholarship aid, death benefits and continuing assistance to medal recipients and their families.