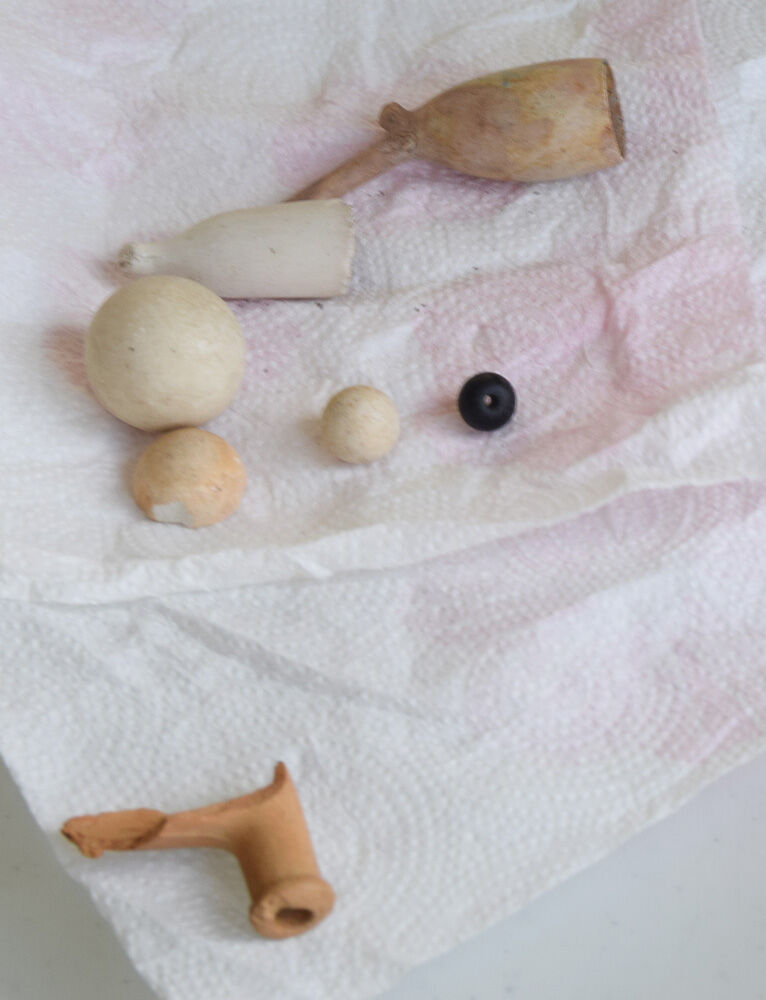 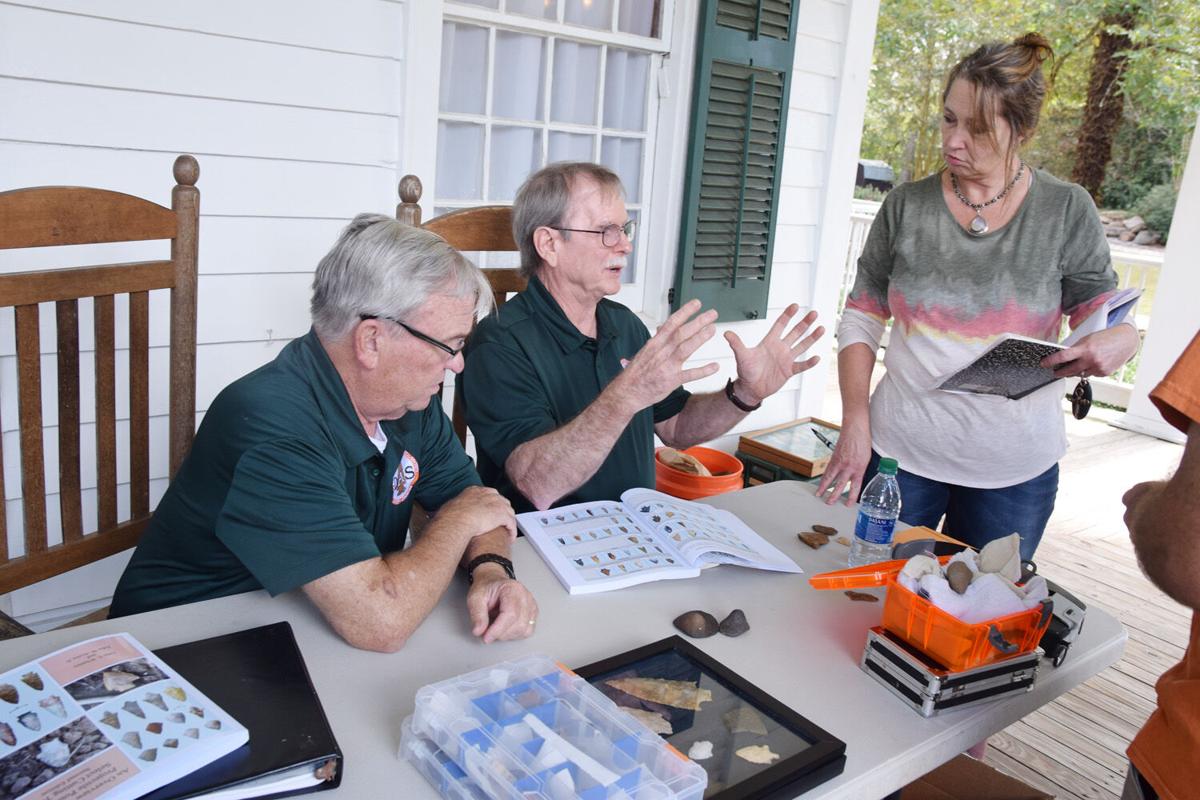 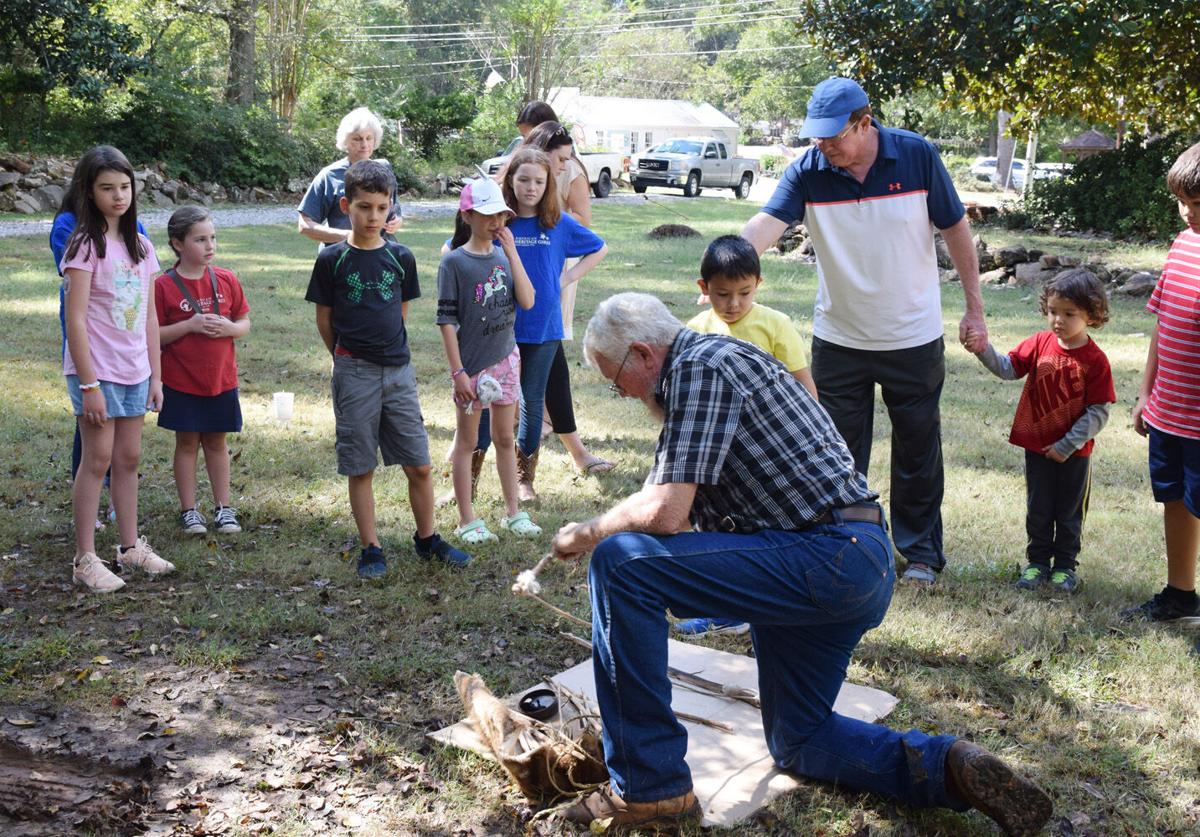 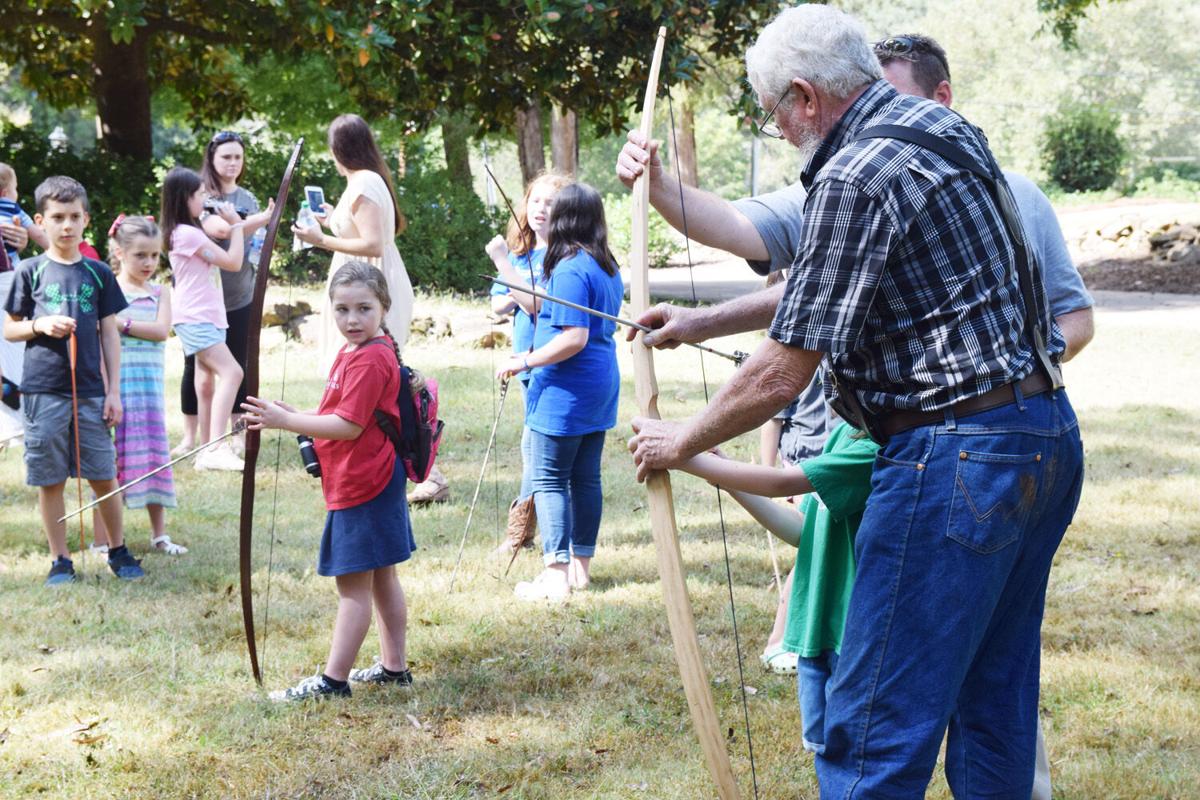 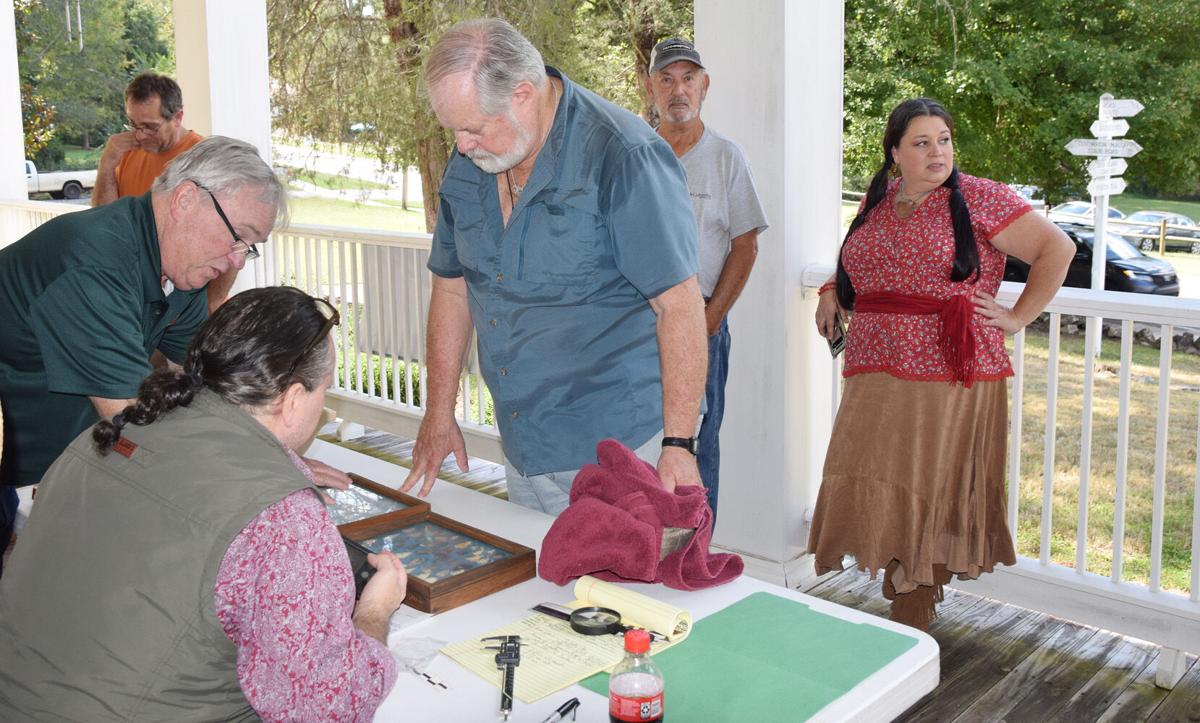 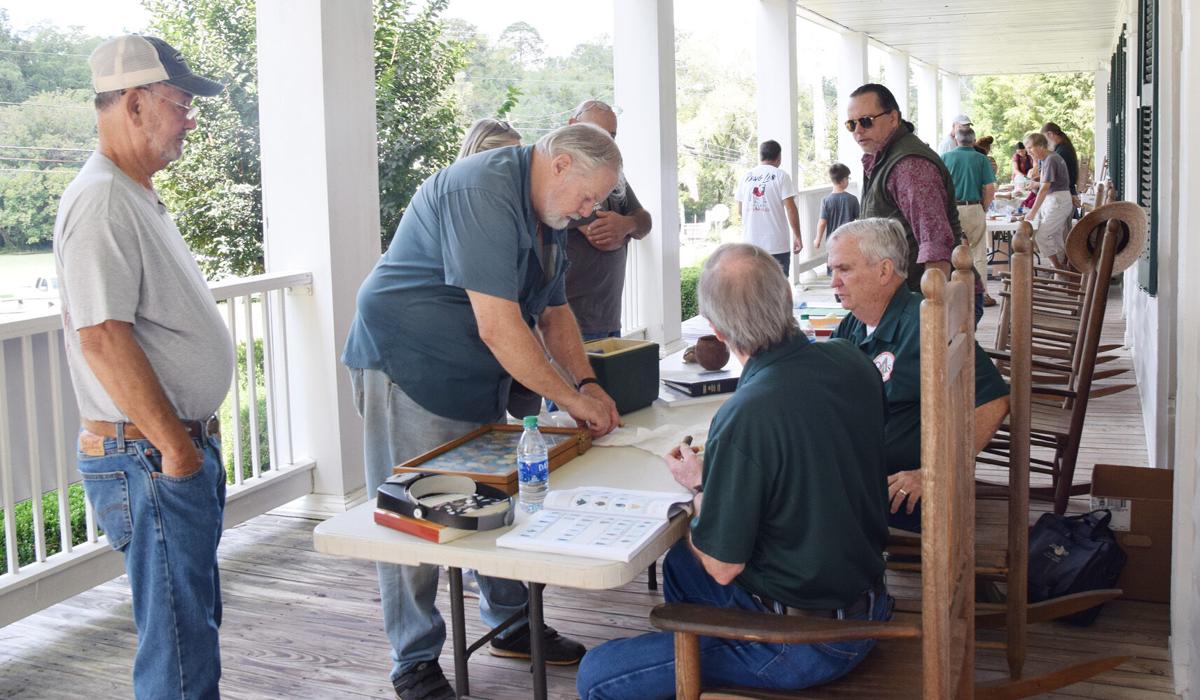 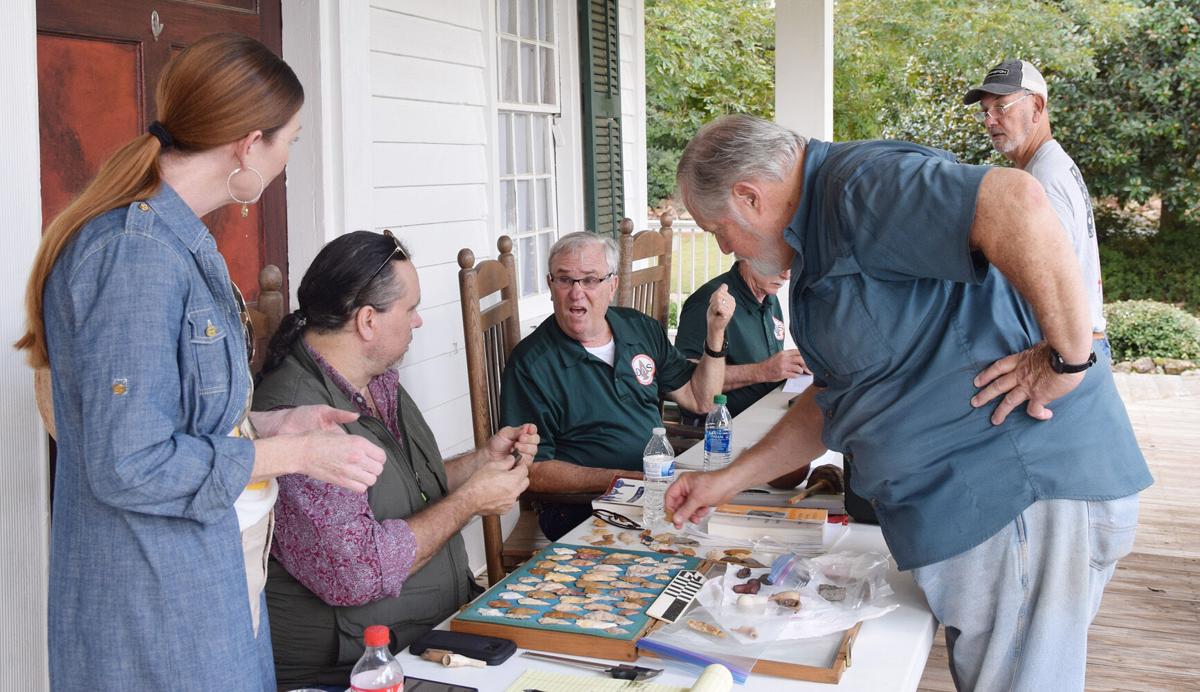 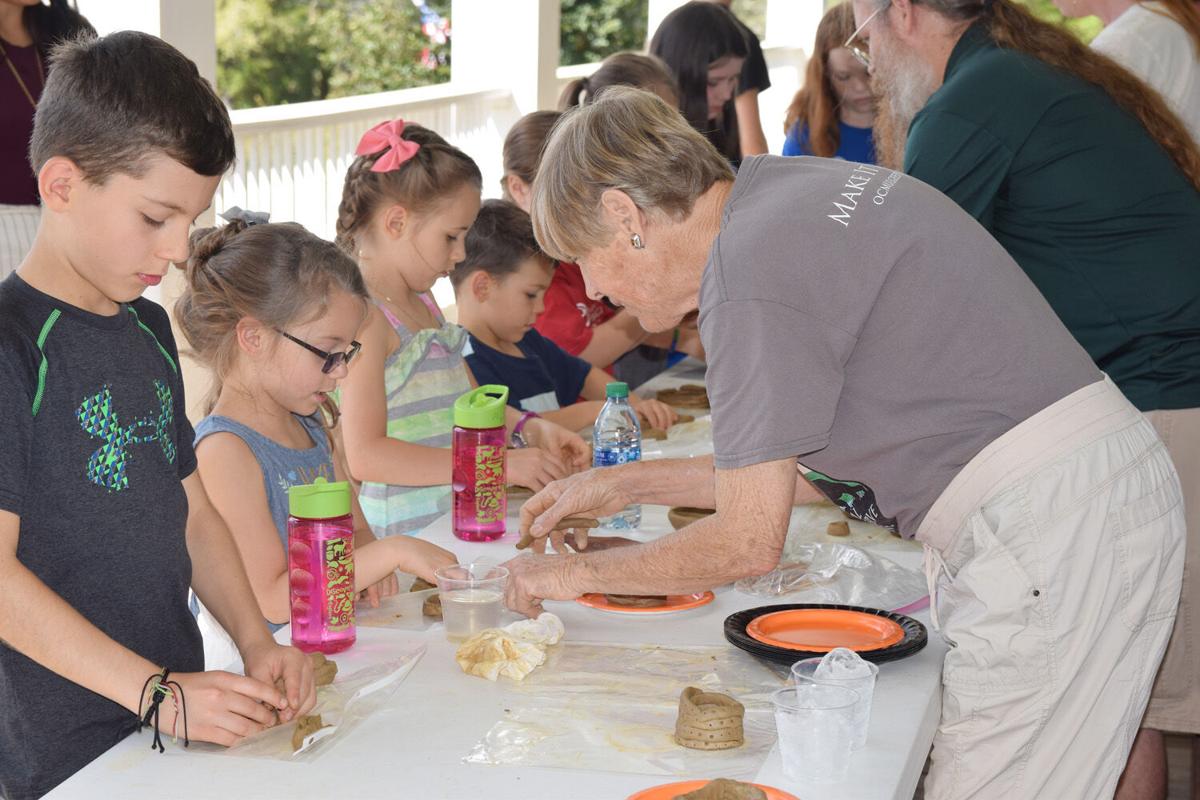 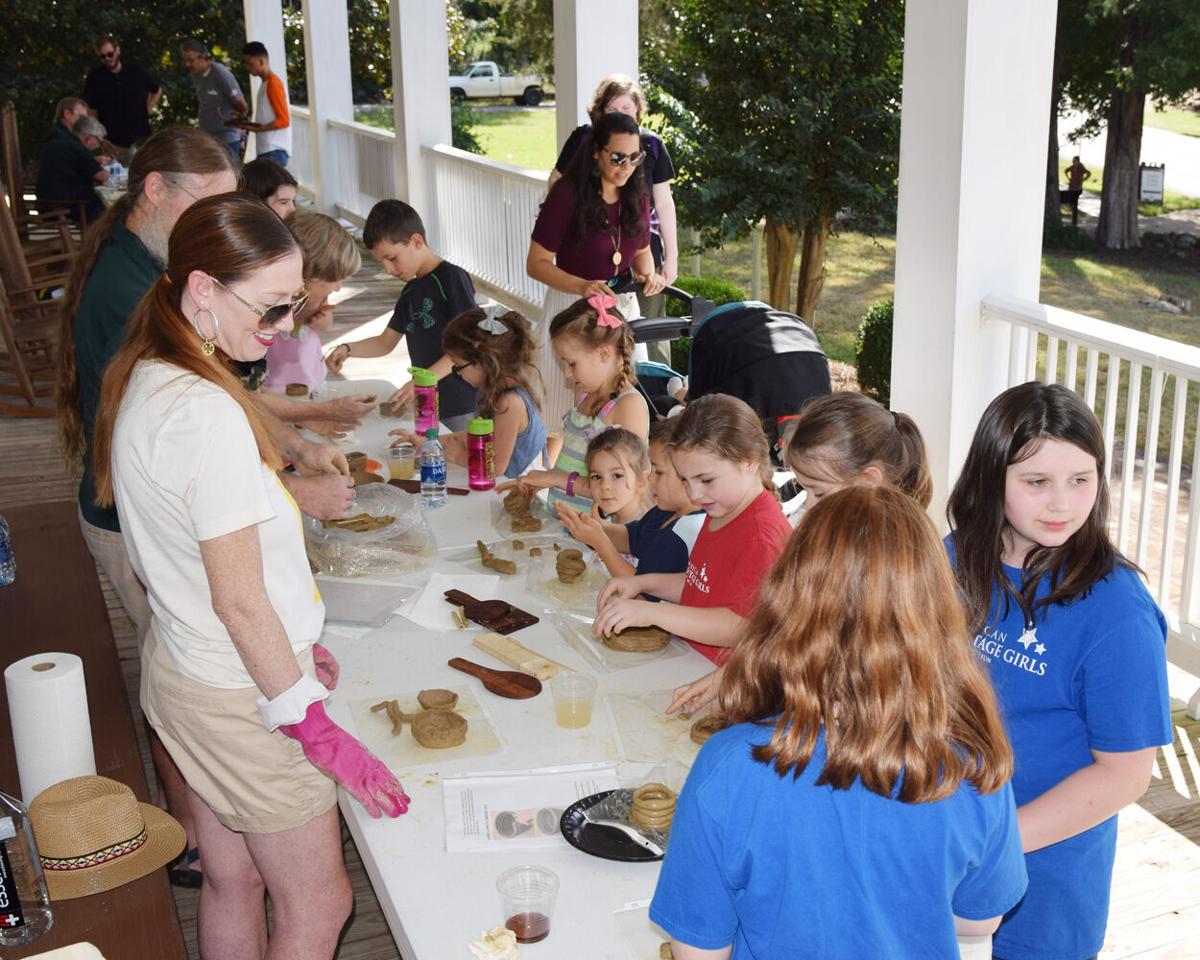 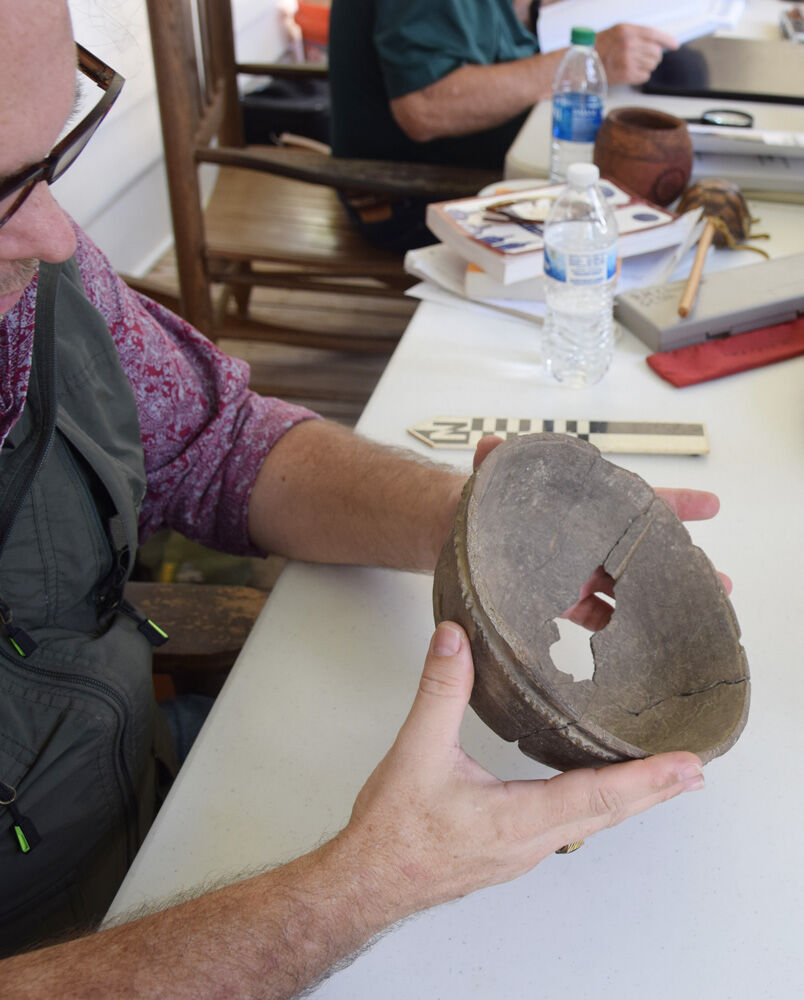 Monroe County just celebrated its 200th anniversary of becoming a county, but alert individuals have found evidence of its history thousands of years before that date and others have worked diligently to interpret that evidence. At the 14th Annual Archeology Day at Indian Springs Hotel Museum on Saturday, Oct. 9, probably the most interesting items shared with the experts from the Ocmulgee Archeological Society were found along the Towaliga River near Juliette.

Neel Lyons said his family has owned substantial acreage in the area for generations, and he has been collecting artifacts since he was about 10 years old. His collection includes a large variety of arrowheads and other points, pottery, pipes, beads and other implements used by the Native Americans living in the area before recorded history.

Archeologist Stephen Hammock identified one as a Dalton projectile point about 4,000 years old, a pottery piece as about 900 years old and a MacCorkle projectile point as around 10,000 years old. He said most of the items were from the Archaic (about 10,000 to 1,000 BC) to early Woodland period. From the design of the weapons, David Mincey, who specializes in points, said some were made to hunt animals at the end of the Ice Age.

John McBride, the pottery specialist on the team from the Ocmulgee Archeological Society, judged a bowl found by Lyons to be from the early Mississippian period, at the end of the prehistoric age. Lyons said he found the bowl buried in sand, inadvertently put a hole in it with a welding rod as he was locating it before digging it up. He cleaned it with a toothbrush and water, which the members of the Archeological Society said was exactly the right way to handle the bowl.

Lyons said one of the most interesting sites where he found artifacts was a small mound that had previously had some type of structure built over it. Terry Joiner of Roswell also brought artifacts he found on undeveloped land near Juliette. He bought 18 acres from Lyons several years ago. The land is primarily used for hunting, and Joiner and Lyons enjoy exploring the wooded tract for evidence from the early hunters.

Lyons had shared some of his finds with other archeologists, including those at the Etowah Indian Mounds, and had a good idea of what things he might find representing the Native Americans known to have been along the Towaliga River.

Kelly Dunn of High Falls brought some artifacts and learned more about them from the representatives of the Ocmulgee Archeological Society. She said she has enjoyed coming to the Annual Archeology Day in Indian Springs for several years and would love to see a museum representing pre-historic life in the area near High Falls State Park.

Archeology Day, originally known as Artifacts Day, grew out of a conversation in 2006 between Hammock and W.J. Shannon, who passed away in December 2017. Shannon was an avid artifacts collector. His collection was donated to the Butts County Historical Society and is on display year round in the Indian Spring Hotel Museum. Hammock said that he brought the people with the knowledge to tell people about their finds, and Shannon did all the other legwork of putting the event together.

Ashley Quinn, president of the Ocmulgee Archeological Society, said the group is working to fulfill more of the educational aspect of its mission at its artifact events by including activities for youth that will get them involved in archeology. Quinn filled about five tables with examples of skeletons of wildlife, looms for weaving textiles and ornaments and with primitive implements and games.

Cortney Whitehouse, Peg Jones and Tim Elliott guided young people in making pottery as Native Americans had done. They provided clay, water and a place to work and demonstrated some techniques. They estimated that about 40 pieces of pottery were created and carried home during the event.

Kim Ruff demonstrated how to start a fire without a match and various hunting skills, including bow and arrow and blowing darts. He talked about how the weapons were made and used and gave the youth a chance to try their skills at hitting a target.

The Ocmulgee Archaeological Society is based at Fort Hawkins in Macon and focuses on serving 21 counties in Middle Georgia “in an educational and scientific manner to preserve our archeological resources.” It was established in 2003 and publishes a newsletter called “All the Dirt.” Its membership includes a range of expertise, including Hammock, who has been an archeologist for over 20 years and has researched the Creek Indians of Middle Georgia extensively, and Quinn, who works professionally in paleontology and has a personal passion for Native American culture.

The Ocmulgee Archeological Society has also held Archeology Days at Fort Hawkins, Thomaston and Eatonton this year and has one scheduled in Hawkinsville on Nov. 13 at Mile Branch Park. The event at Indian Springs was sponsored by Butts County Historical Society.