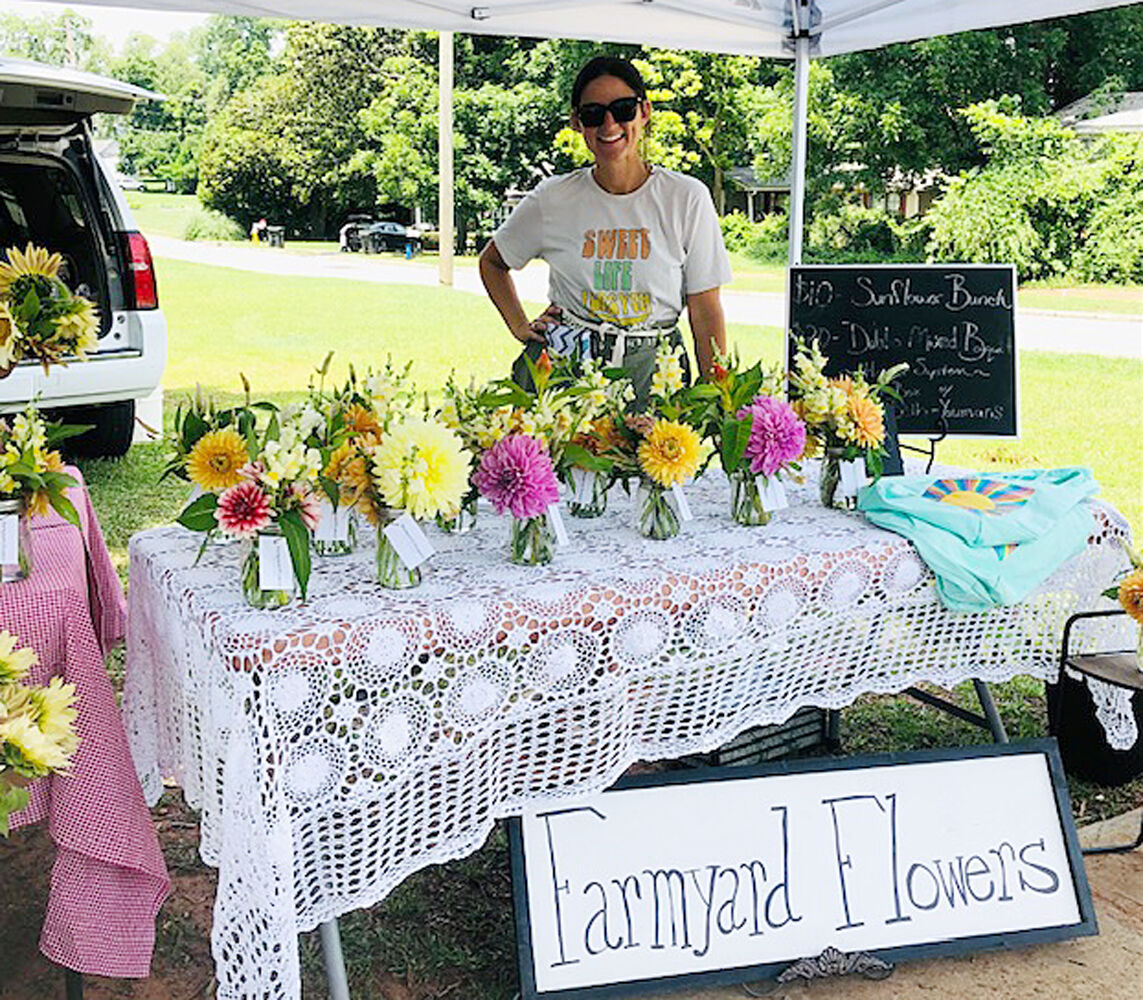 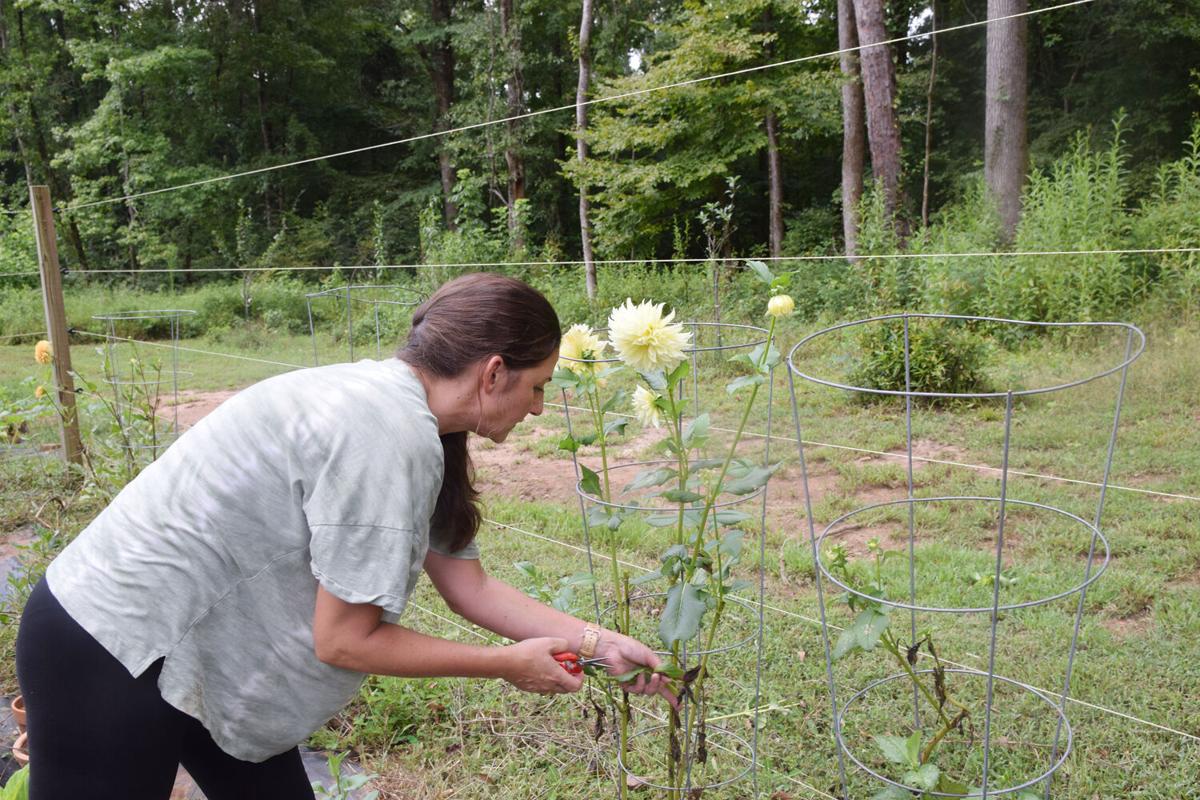 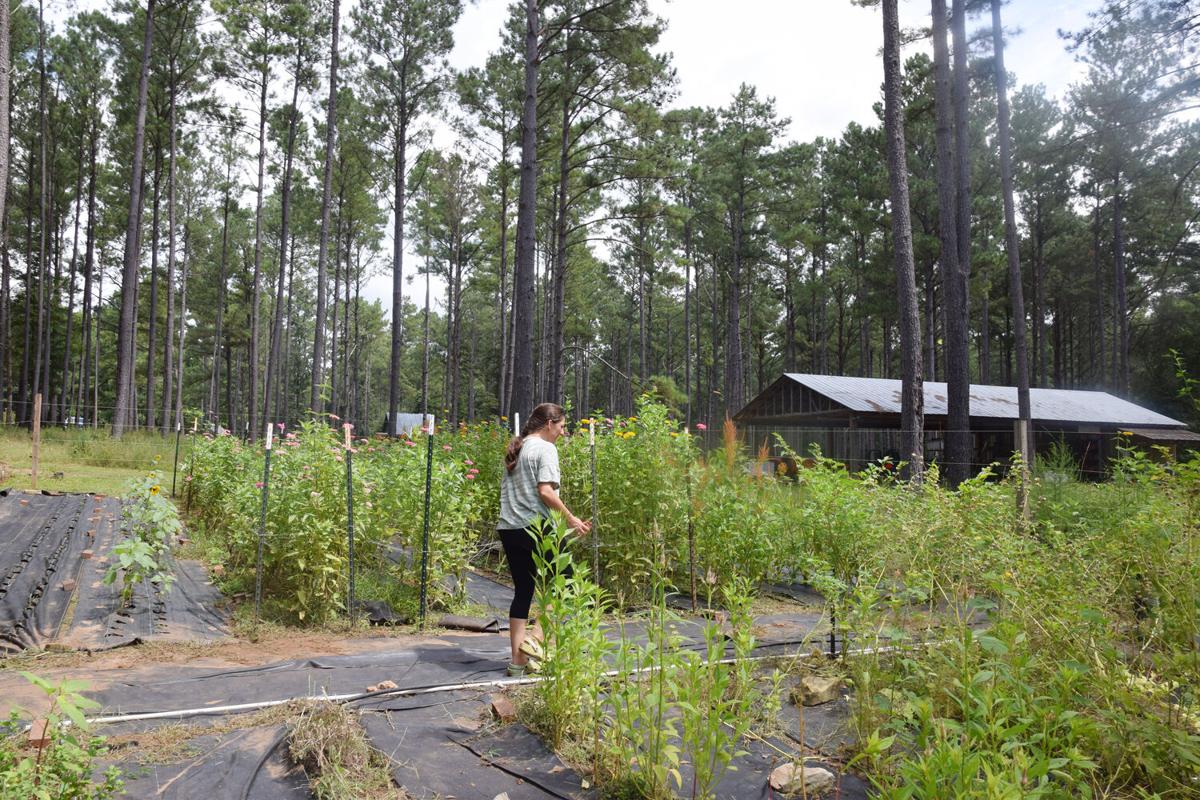 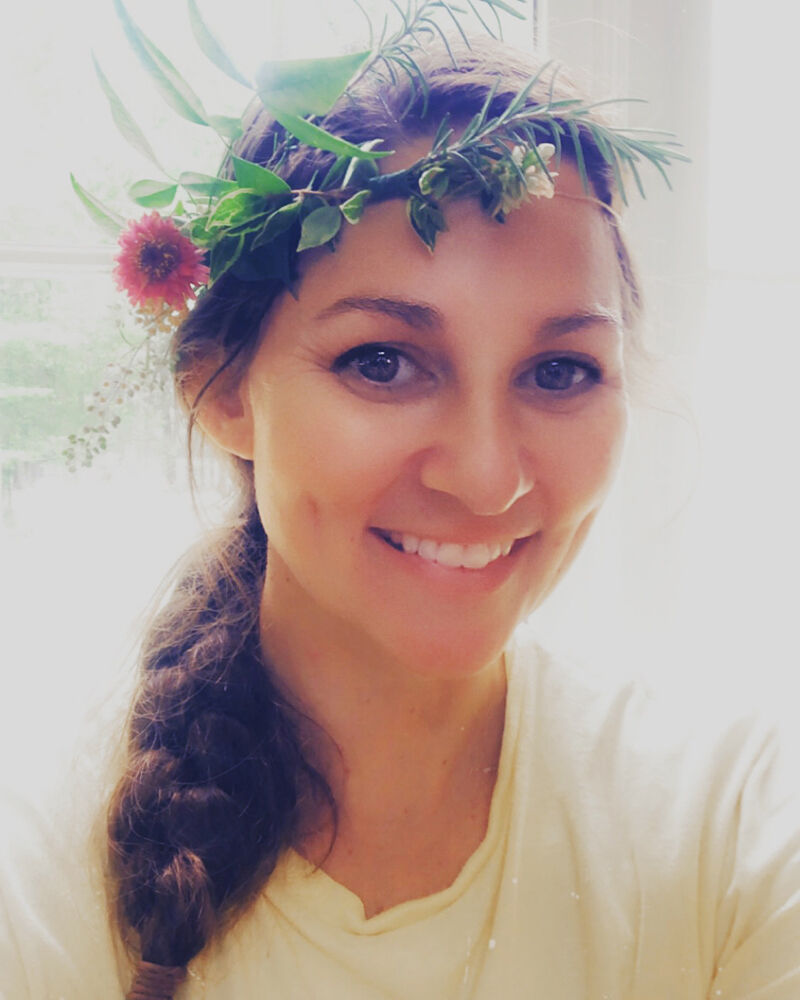 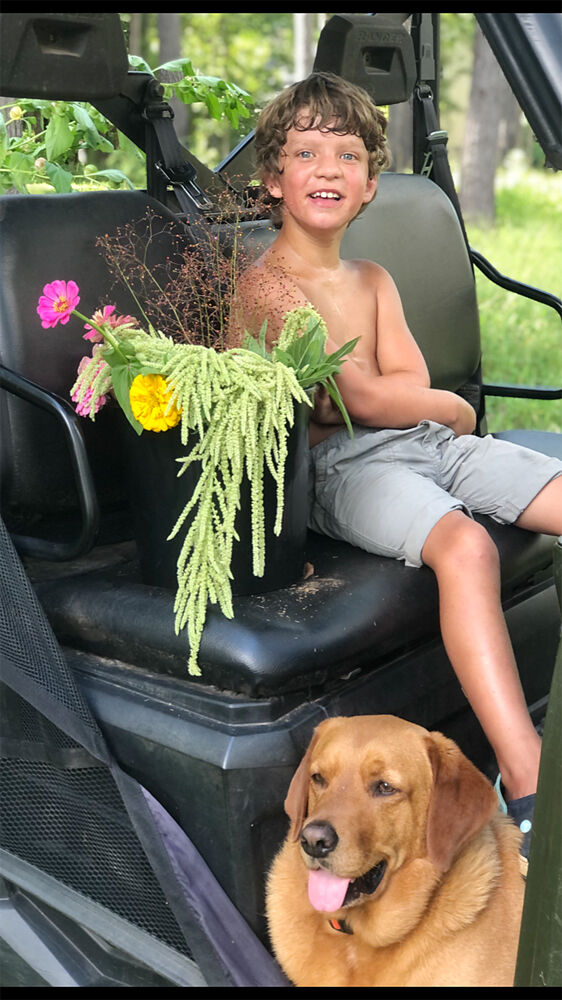 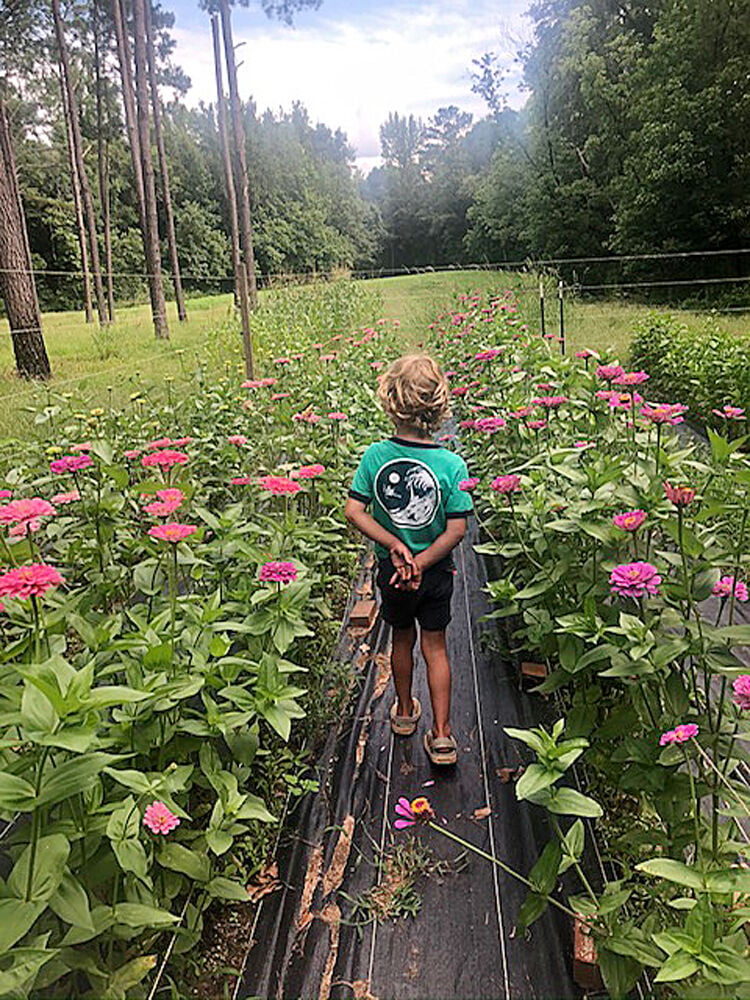 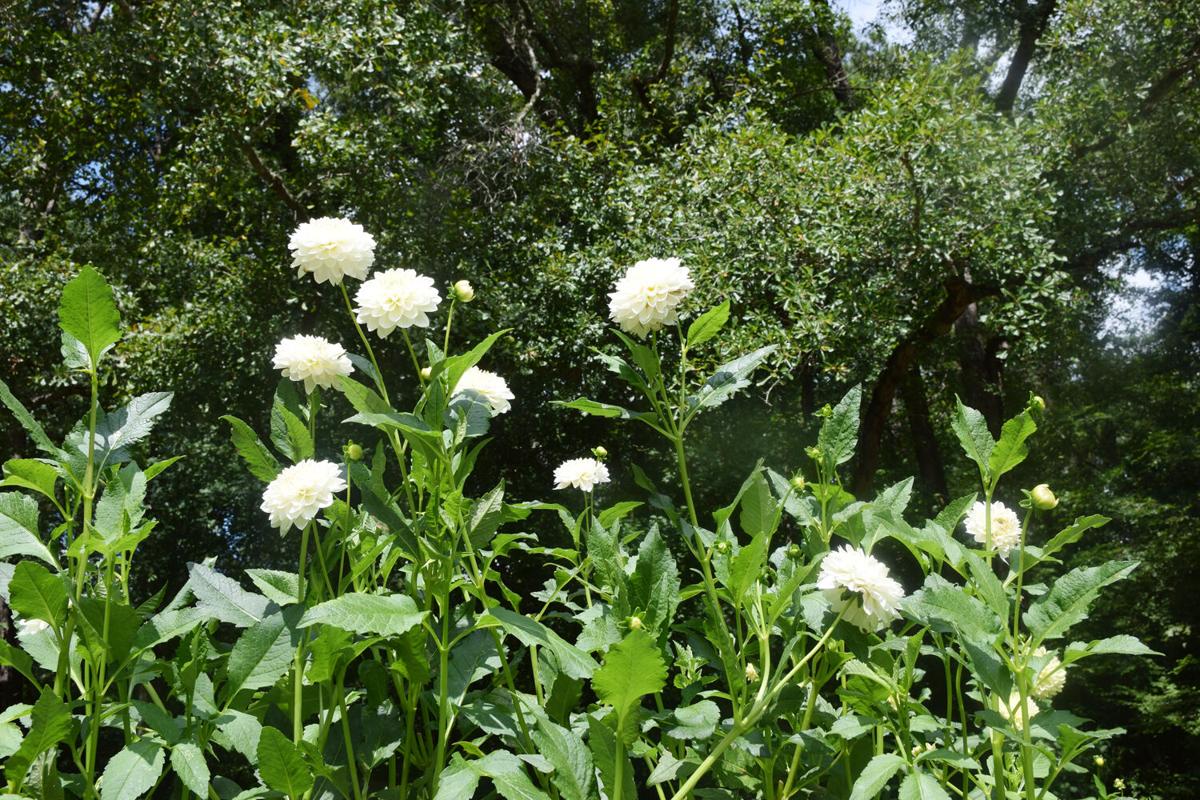 Beth Youmans is a multi-talented lady who has found a way to combine her love for the outdoors and growing things with her excitement about learning, meeting a challenge and interacting with people. Add to that a business sense for marketing and accounting and an artistic creativity, then leave time to manage scheduling and bookkeeping for her husband’s business and time to be an attentive and involved mom to two energetic boys and you have a sketch of the entrepreneur behind Farmyard Flowers.

These are the skills and balances that Beth brings to Farmyard Flowers, her thriving business of growing, harvesting and marketing fresh-cut flowers from her home in southern Monroe County. She said she is always learning more about all aspects of the business, from the agricultural challenges to the nuances of market differences between even Macon and Forsyth. She is constantly listening to a pod cast, reading a book or observing something new in her gardens.

Beth said she has always loved to arrange flowers, learning the art from her mother who learned from her mother before her. Beth provided arrangements for her church for years before she began to do them professionally and was often asked to create arrangements for weddings and other special occasions. She read about Floret Farm, a flower farm developed by a couple in Washington state, several years ago and the seed of an idea was planted. Since then Chip and Joanna Gaines of “The Fixer-upper” have filmed a documentary on “Growing Floret” and there are two additional books in the series on flower farming.

Beth said she feels it is something she can do but there has been a lot to learn about when to plant, when to harvest and how to care for the plants. She is beginning her third year as Farmyard Flowers.

At this point in her life Beth thinks new high school graduates should work for a while so they know what they want to study before they go to college. If she were enrolling this fall, she would like to study agri-business. However, after growing up in Macon she headed to University of Georgia and earned her degree in journalism. She completed an internship with Southern Progress Corporation, which includes such well-known publications as Southern Living, Cooking Light and Progressive Farmer.

She returned home to Macon, began working as a secretary at an accounting firm and married Brandon. When their first son was born nine years ago, she took the opportunity to stay home with him. In 2014 the family, which now includes Brandon, Beth, sons Levy and Howard, dog Tater and five chickens added during the pandemic, moved to Monroe County. Their rural home is near the home of Brandon’s parents.

Beth began growing flowers for herself but as she continued doing arrangements for her church and others, the idea of growing flowers commercially began to bloom. She has sold flowers at Mossy Corner Nursery in Smarr, at the Forsyth Farmers Market and to florists in Macon. She markets her flowers on-line and has been successful with a subscription service providing bouquets and arrangements monthly on a pre-paid basis.

“I love outside, but I love spread sheets, too,” Beth said of coordinating the agricultural and business aspects of flower farming.

She says her business has more than doubled over the last year. She finds that the subscription format of “community shared agriculture” (CSA) works well for her because it gives her funds to plant for the next season. As she works to plant and expand, she is also taking a course from “Flower Farmer.” She is a member of the Association of Specialty Cut Flower Growers and is touring a farm in Tennessee next week as part of the group.

“It’s a constantly changing market,” Beth said. “I am always learning. You have to be in it.”

She said fresh-cut flowers are a $7 billion industry in the United States, but 80 percent of the flowers are imported. Last year there was a global flower shortage. There had been less flowers sold at the beginning of the pandemic; consequently less had been planted. By last Mothers’ Day the demand far exceeded the supply.

Beth said the key is educating wholesalers and florists about all the advantages of using locally grown flowers, such as the freshness and the fragrance. She noted how imported roses are devoid of fragrance. There is an environmental advantage because local flowers don’t have to be preserved with chemicals as imported ones do. Sometimes wholesalers and florists might have to try new varieties of flowers but there are many substitutes that provide the desired colors, textures and visual effects. Beth thinks the advantage of supporting local growers should make it worth investigating what they have to offer.

She is thinking of offering a “You Pick” option at Farmyard Flowers but wonders how many urban and suburban dwellers would venture out into the country. She has thought of teaching some floral arranging classes after expanding her garden shed to a floral studio “but not in the heat of summer”. She has planted a pumpkin patch this year with visions of scooping out the pumpkins and using them as the base for flower arrangements this fall. And she has plans for wreath making and arranging bulbs for forced blooms in the winter.

Beth said spring and fall are the biggest seasons for cut flowers. Last year when she posted her first bouquet she quickly sold out. For the 2021 season she planted 400 tulips; she will plant 2,000 this fall for spring harvest. She has kept fields of dahlias and zinnias, among other colorful and interesting flowers, blooming through the summer and is planting mums for the fall, checking soil and sun to implement lessons she has learned. The frequent rainfall this summer hasn’t caused problems because her two main plots are on inclines and drain well.

Beth’s husband helps her with the heavy gardening work, especially with tractor work and planting posts, and her sons help with weeding and other chores. As she was playing a podcast about flower farming, she had an “aha!” moment with Levy, age 9, who told her the whole talk was about learning your passion.

“I like going out in the early morning, beating everyone waking up, getting a cup of coffee and looking at what’s growing,” she said. “It’s just fun. I know I’m doing the right thing because I love it.”

Does she talk to her plants? Oh, yes. They are her natural stress relief, and she gives them pep talks. She chats with them as she prunes and looks for all the new stuff coming up underneath.

Beth apparently has some farming in her genes. Her father and brother are raising row crops, like cotton and soy beans, on their farm in Stapleton in eastern Georgia. Her sons go to T.G. Scott Elementary and she would love to help start an agriculture club at the elementary school.

“There are a lot of cool, different things available for schools,” she said.

Check out the Farmyard Flowers website at farmyard flowers.com to see what Beth has blooming and available. She is also planning to start harvesting and selling seeds in case you can envision yourself grabbing that early morning coffee and going for a stroll before anyone else gets up to see what’s growing.