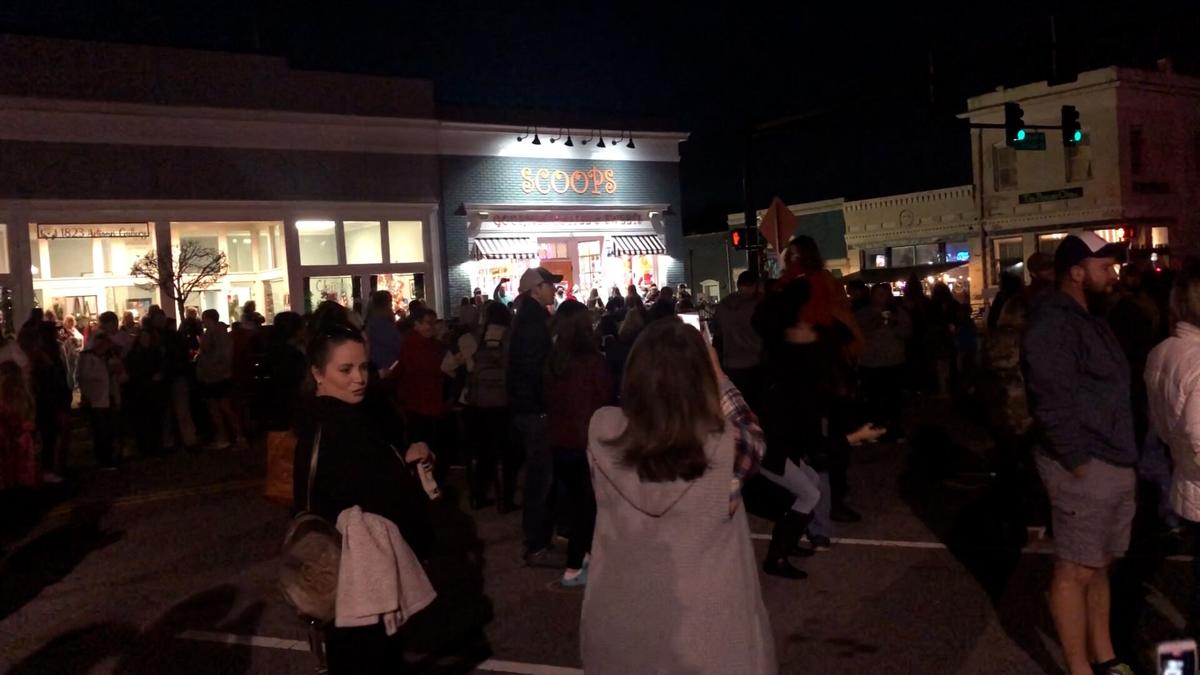 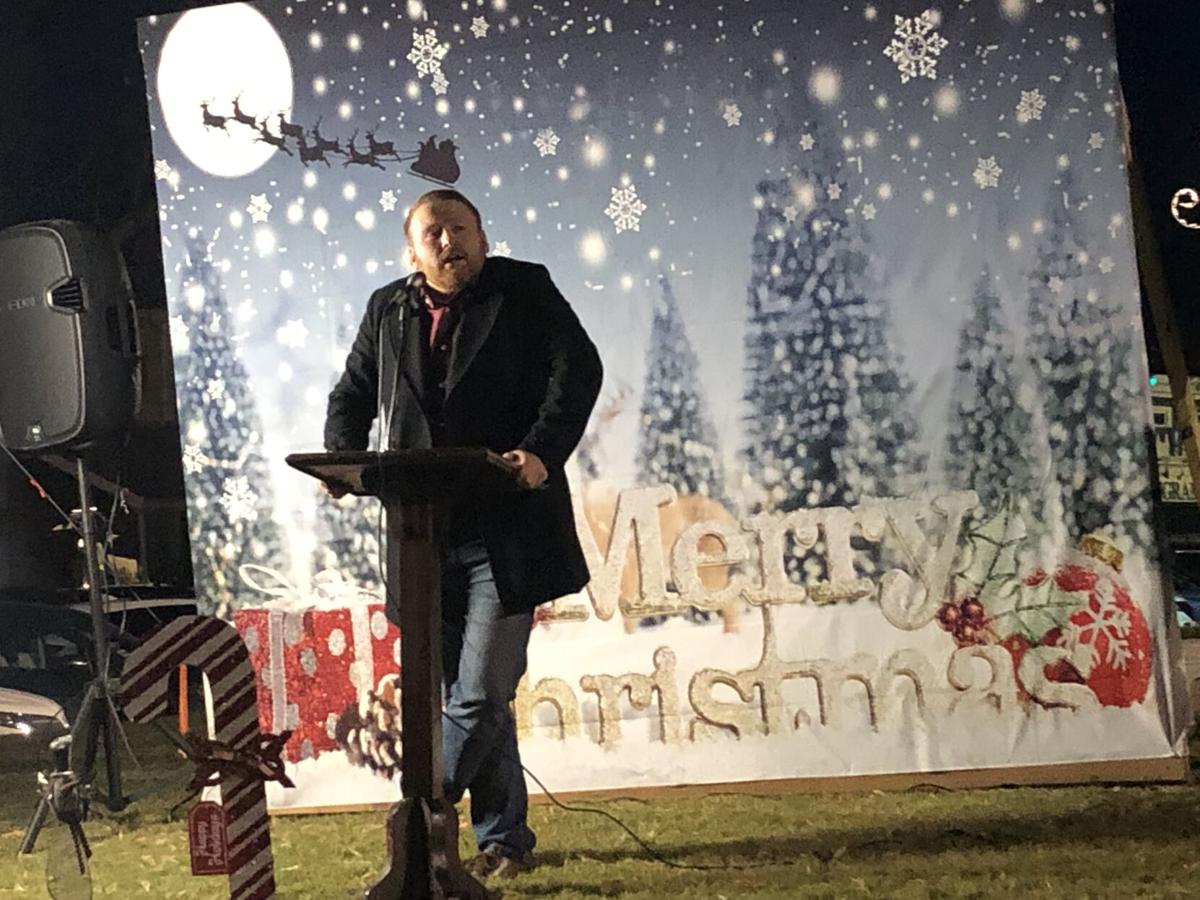 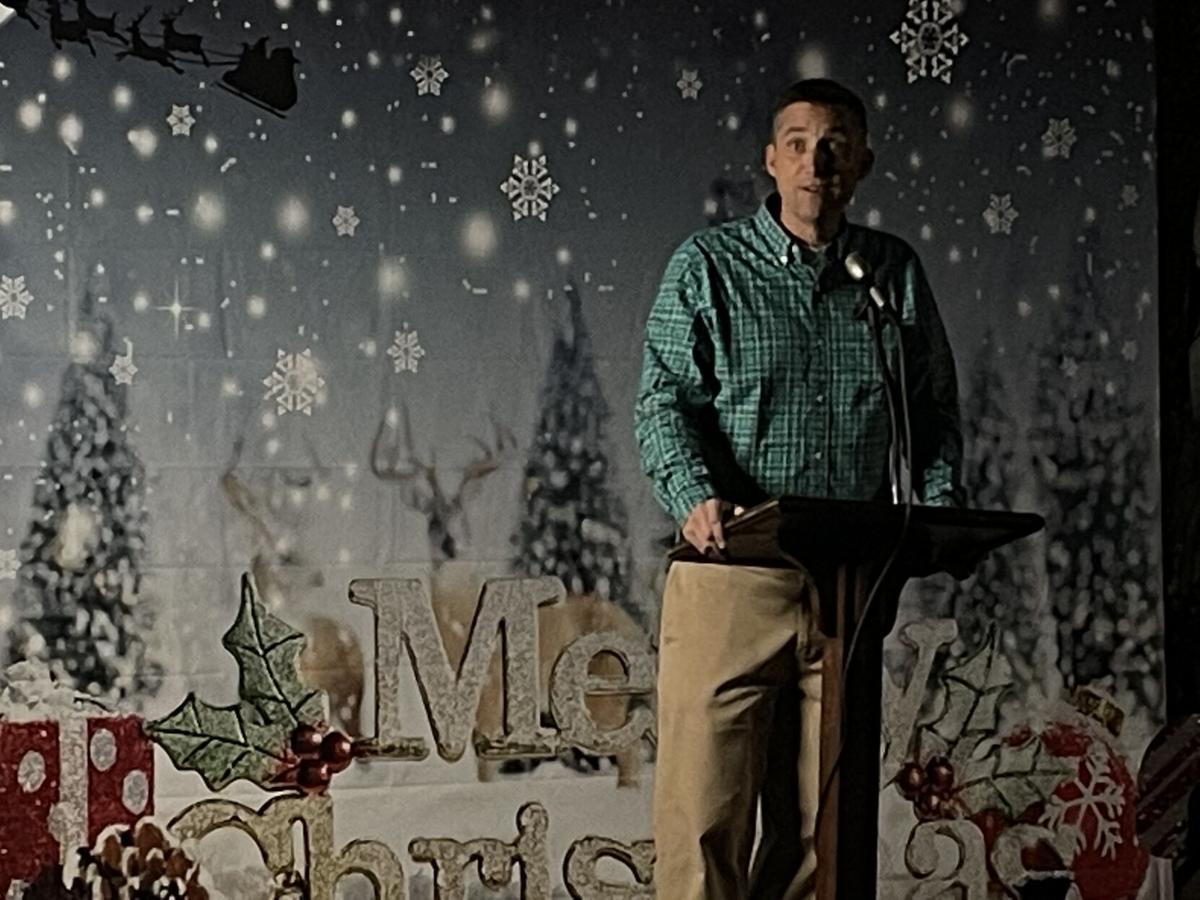 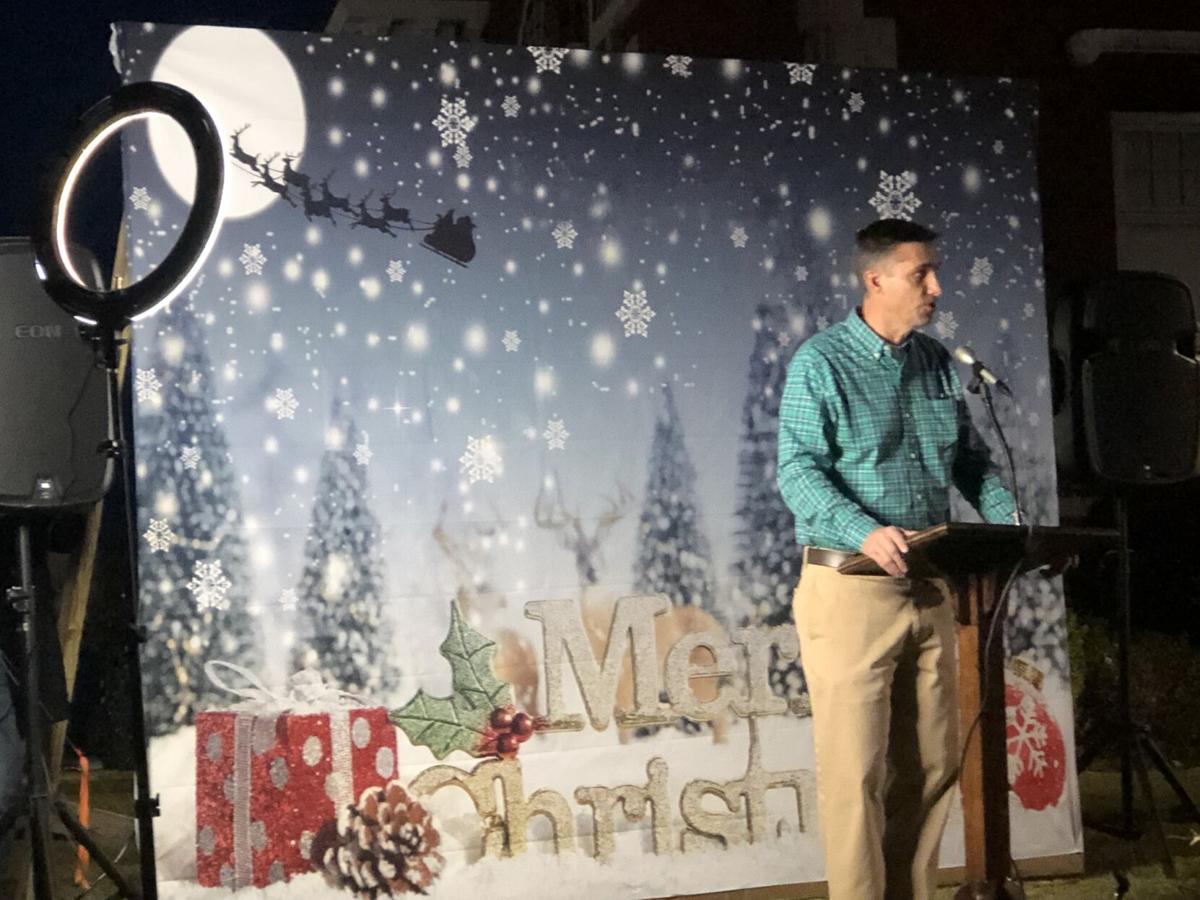 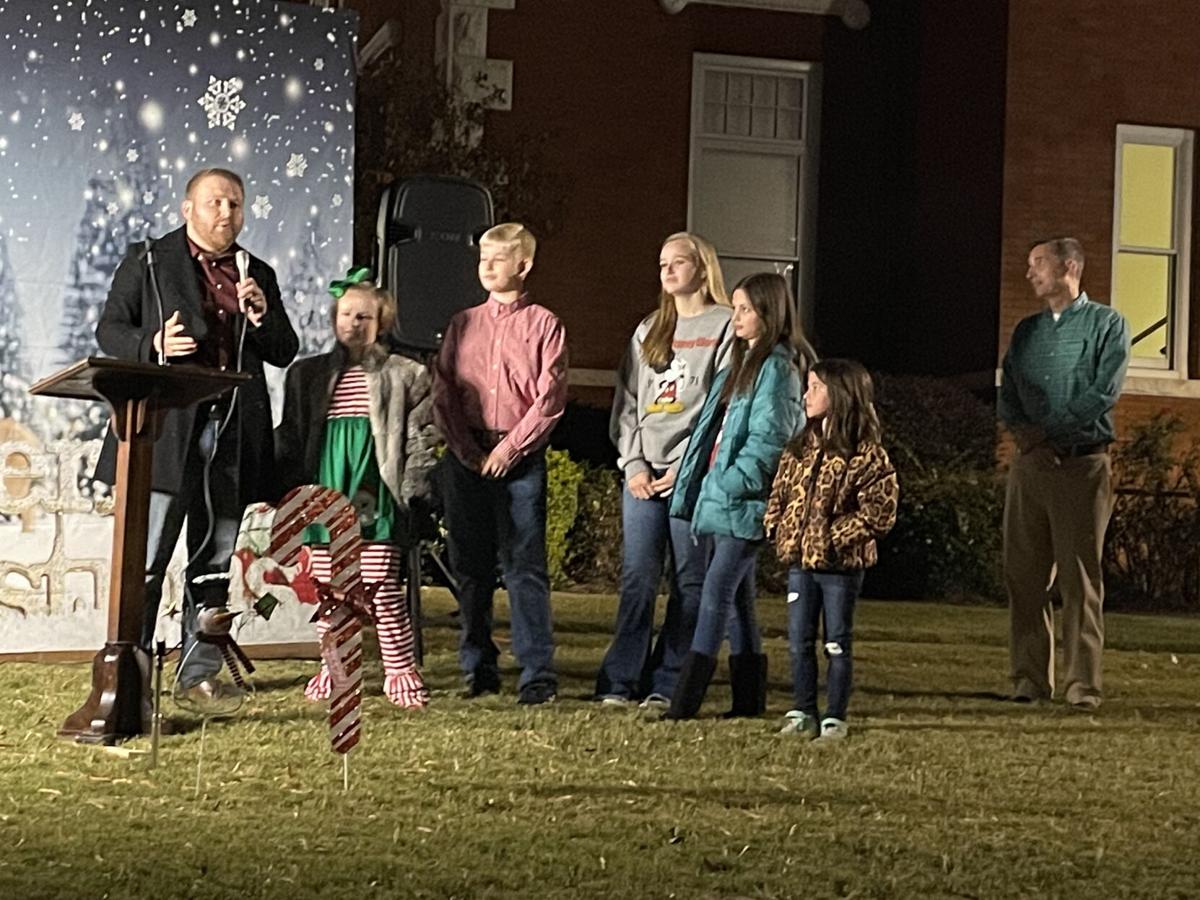 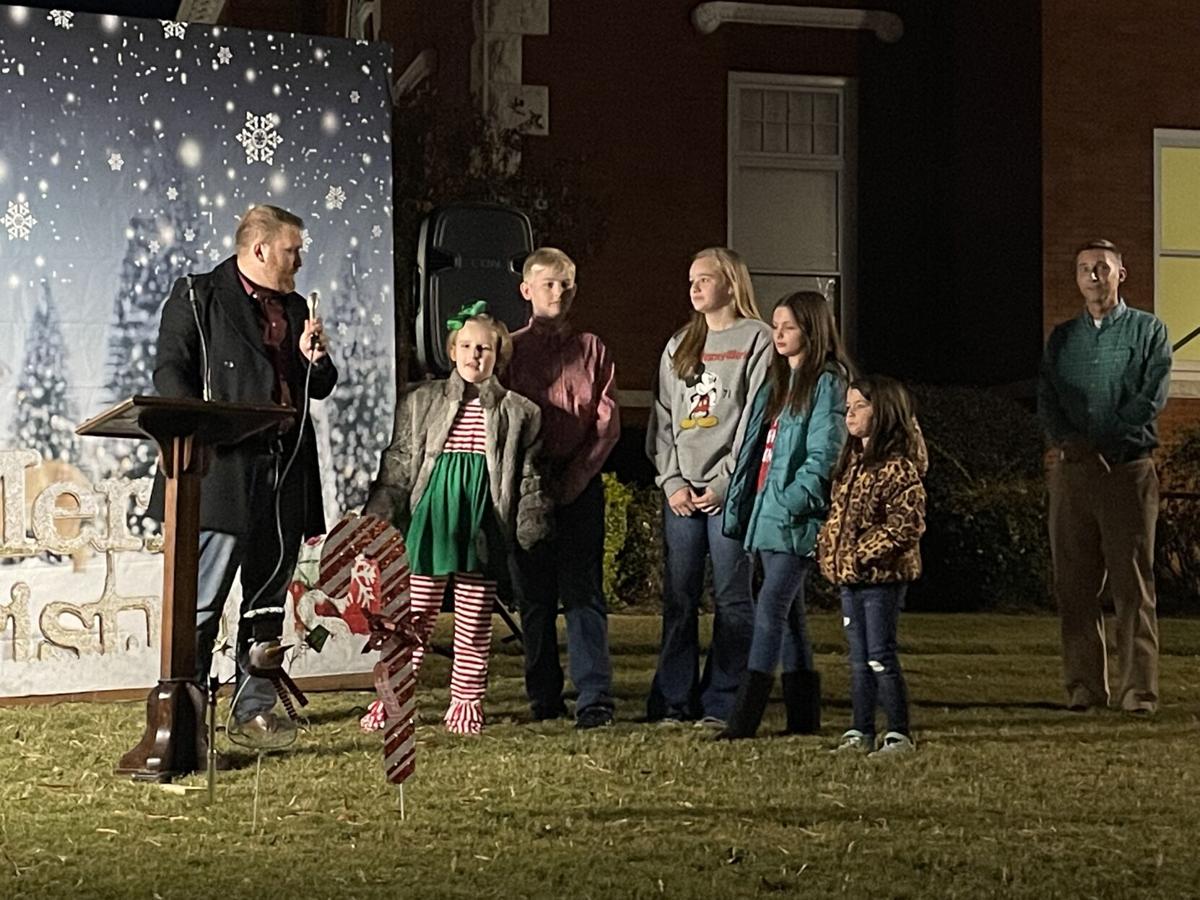 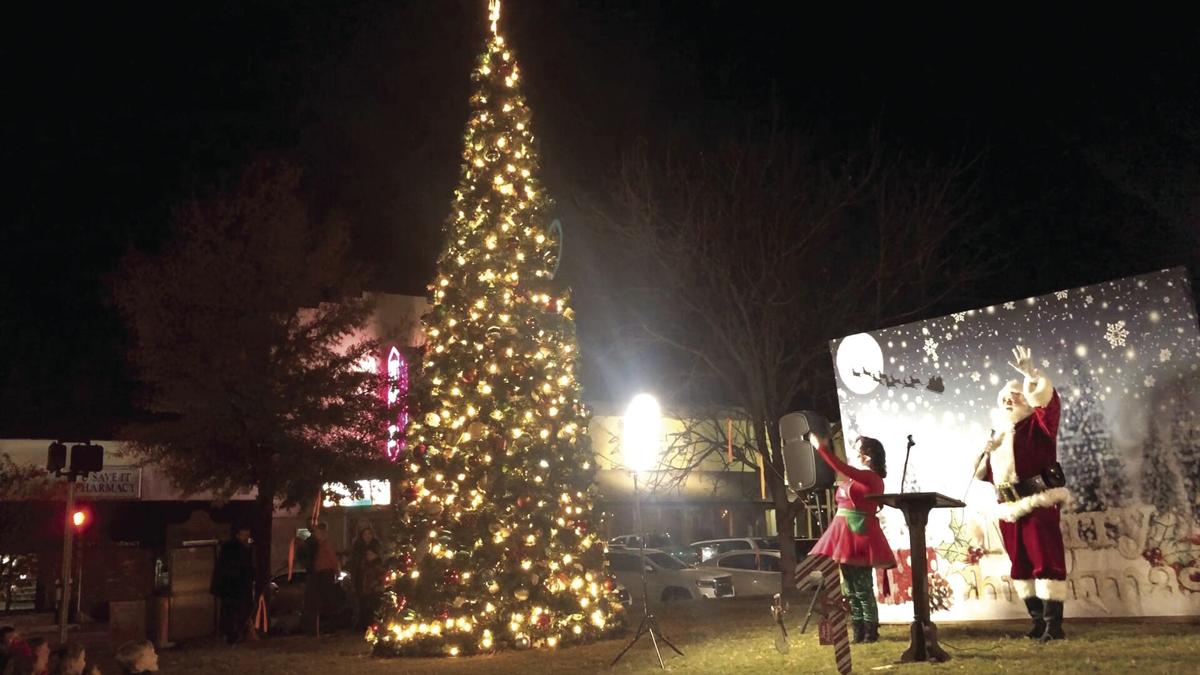 The city of Forsyth officially kicked off the Christmas Season Saturday evening when 8-year-old Madelyn Sanders switched on the brightly colored lights on a 35’ tree standing tall on the Courthouse Square. Mayor Eric Wilson began the tree lighting ceremony by welcoming a crowd of around 400 assembled on North Jackson Street.

The mayor then introduced Frank Wilder, director of the Forsyth Main Street Program which organized the ceremony. Wilder gave a short speech reminding everyone of the great shops and stores in Forsyth and informing folks that many of the stores around the square would stay open until 8 p.m. with deals and specials. Wilder said the businesses are the foundation of the community and what really holds it all together. He also called for special applause for the 1823 Artesian Guild who put up the decorations surrounding the tree which resulted in a loud cheer. Meanwhile, Santa Clause was waiting for his cue in Scoops which was giving away cookies and hot chocolate.

The mayor returned to the lectern and gave a short history of community Christmas tree lighting mentioning Germans who began putting lights on their trees signifying that Jesus was the “light of the world”. He added that the lighting at the Rockefeller Center in 1931 really began the tradition of community tree lighting ceremonies which is now an important part of our community.

He then introduced Madelyn, a student at Samuel Hubbard Elementary School, and had the Sanders family join him in front of the snowy Christmas scene background. Madelyn is also known as “Mighty Madelyn Monroe” and has been battling brain cancer since 2020. Wilson said her family is extremely grateful for the support they have received from the community.

Wilder then asked Madelyn to ask Santa to make his appearance and she excitedly took the microphone and shouted, “Welcome to Forsyth, Santa!” Wilder had the crowd join in to repeat Santa’s welcome and old Kriss Kringle finally emerged from Scoops and slowly made his way through the throng to the loud cheers of happy children and more than just a few adults.

After the crowd loudly counted down from ten, Madelyn flicked a switch, and Christmas began on the Square with Santa taking his place of honor in his special seat for photos and Christmas wishes.