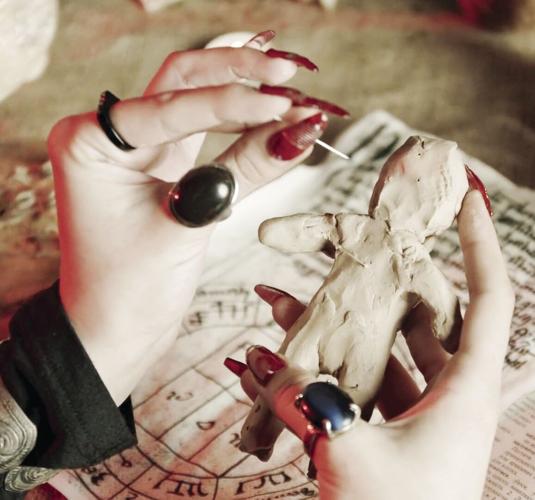 You may be surprised to learn Voodoo is alive and doing well. Voodoo first came to America in French Louisiana brought by slaves from West Africa. They had extensive knowledge of poisons and herbs and brought with them their cultural practices and religion. Their amulets and charms are used for healing, protection and to keep a close connection with loved ones. To cure a variety of ailments including anxiety, addictions, and depression, practitioners of the religion take spiritual baths, pray, chant, beat on drums, dance with snakes, and go into trance-like states.

Early slaves in Louisiana were held in large groups far from white settlers and were able to preserve their African traditions. After a slave revolt in Haiti in 1791, many took refuge in New Orleans and by the 19th century, Voodoo queens and kings had become spiritual and powerful political figures.

A small effigy commonly called a voodoo doll is well known for the practice of inserting pins into humanoid figurines to cause harm to witches and the like. Movies from the early half of the twentieth century depict people poking sharp pins into the dolls to cause sickness and pain to adversaries. By the twenty-first century, voodoo dolls were everywhere as novelty items. You can even buy them from vending machines in shopping centers and there are tutorials on how you can create your own. The most difficult part involves securing a lock of your enemy’s hair.

In truth, voodoo dolls aren’t used in the religion. Louisiana Voodoo High Priest Robi Gilmore said in 2020, “Hollywood really did us a number. We do not stab pins in dolls to hurt people; we don’t take your hair and make a doll, worship the devil with it, and ask the devil to give us black magic to get our revenge on you. It is not done, it won’t be done, and it never will exist for us.” Maybe not, but still I’m staying away from y’all’s magic.

My brother David and I once set up camp on a riverbank over in Alabama one Friday evening for a night of fishing and jamming on the guitars. Many folks wouldn’t believe it, but there are places in Alabama that are beautiful beyond belief. This fishing spot was one of those places. We hurriedly pitched the tent, gathered firewood, and rushed down to the river for our supper. No luck. After two hours of watching the water go by, not even a nibble. We were a little disappointed, of course, but it wasn’t a deal buster. Just in case, we had brought along a few cans of sardines, some crackers, and beer, so we were good.

Soon the sun went down, a full moon came up and we headed for our guitars for some fireside singing. While we were wailing out a good one, about the third song in, David suddenly stopped and silenced my guitar by putting his hand on the strings. “Did you hear that?” I didn’t hear anything and told him to take his hand off my guitar while I was in the middle of my best song.

And then I also heard the drums. Faintly at first but somewhere in the woods, someone was beating a beat that had a strong voodoo rhythm going on. And whoever was pounding that drum was getting into it and his music got louder and louder. Soon another drum joined in with an alternate beat that inspired my brother and me to pick up our instruments and add our sound to the strange sound that filled that Alabama forest.

All in all, it was a pretty good jam session but when the moon was directly over us the drumming faded away and the fire was merely glowing embers. I poured what was left of my beer into the firepit, packed up the guitars, and we headed for the tent.

We talked a bit about what a strange place we were in and wished we could’ve recorded the night’s music. It was sounding pretty good there for a while and certainly different. David took off his shoes and zipped up his sleeping bag which did little to cover the smell of his feet. It seems that the person who snores is always the first asleep and soon I was listening to that racket as well.

Somehow, I finally dozed off but a couple of hours later, probably around midnight, I was awakened by the sound of loud splashing in the river. It sounded like fish jumping and I woke David and told him to grab the poles. We ran down to the bank and saw thousands of snakes dropping from the trees into the water and swimming downstream. While we were standing there in amazement, the voodoo drums started beating again.

We both reached the truck and slammed the doors shut in the same instant. I really hate to admit it, but we left behind two guitars, two fishing rods, and a tent.

Steve Reece is a writer for the Reporter and a known crime fighter. Email him at stevereece@gmail.com.