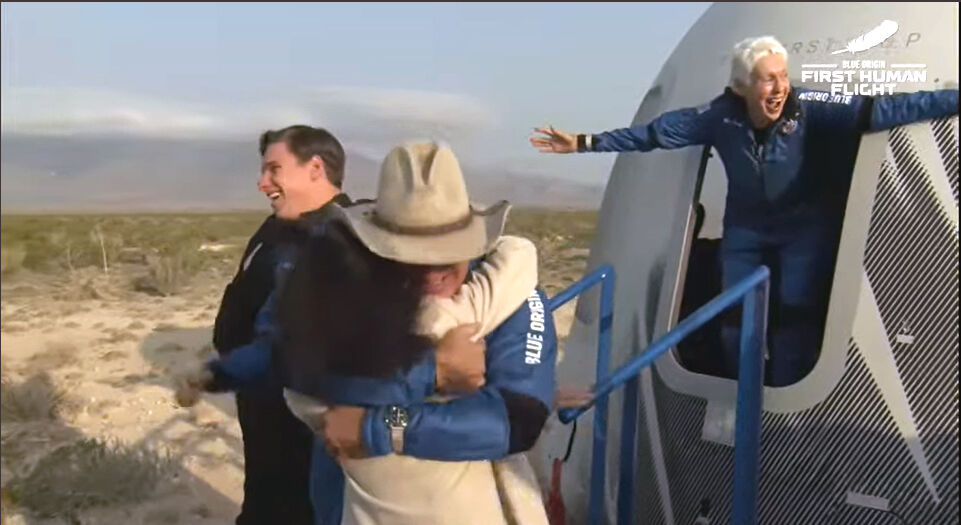 Vermont Sen. Bernie Sanders wasn’t at all impressed with Sir Richard Branson’s recent space adventure. He tweeted just after Spaceship 2’s landing: “Here on Earth, in the richest country on the planet, half our people live paycheck to paycheck, people are struggling to feed themselves, struggling to see a doctor – but hey, the richest guys in the world are off in outer space! Yes. It’s time to tax the billionaires.” On the other hand, Gen. Jay Raymond, chief of space operations for the U.S. Space Force said of Branson’s flight: “Your years of hard work & dedication paid off today with a flawless flight to the edge of space.”

Branson’s company is set to roll out commercial flights to space in 2022 and while tickets for this incredible experience will cost a fortune, common folks like you and I now have a chance to ride along. For the price of a Power Ball ticket, I purchased twenty chances in the Virgin Galactic contest in which a person will be randomly chosen to float weightlessly alongside a few rich people in an upcoming flight.  The winner can take a friend. I’ve already chosen mine and they’ve agreed to go so don’t bother to ask when I’m chosen.

You can enter the contest for free but two dollars for twenty chances seemed like a great deal. The money I spent for the entries was a donation to the Charity Aids Foundation. Of course, the more money you donate, the more chances you get. For a mere $100, you get 2,000 entries. You must be 18 to enter, sign an informed consent document (in the unlikely case of a mishap), and you must be fully vaccinated against COVID by flight time. You can Google the contest, if interested.

Even though Branson upstaged Jeff Bezos by launching his Spaceship 2 nine days earlier, Bezos, the richest man on the planet, also broke records on a flight that took place yesterday, July 20, the 52nd anniversary of the Apollo 11 moon landing. To begin with, Bezos’ Blue Origin launch was the first fully automated flight in history with civilian astronauts.

The record for the oldest person in space, formerly held by John Glenn at the age of 77, has now been claimed by 82-year-old Wally Funk, a pioneer female aviator and a former member of the Mercury 13 which was a part of the “Women in Space” program. In 1961, she passed the same training tests as male astronauts even scoring higher than John Glenn on some of the tests, but she never got to ride.

Also, on the crew with Bezos was a recent high school graduate, 18-year-old Oliver Daemen of the Netherlands, who now holds the record for being the youngest person in space although Daemen wasn’t even supposed to be on the flight. Bezos’ space company, Blue Origin had an auction for the seat which reached a top bid of a whopping $28 million but the winner later cited “scheduling conflicts” prevented him from suiting up. Daemen was then slotted in with a ticket that was purchased for an undisclosed amount by his father. Bezos’ brother, Mark, rounded out the passenger list. Soviet Cosmonaut Ghermon Titov, the second human in space, formerly held the record of being the youngest in space at the age of 25 in 1961.

Bezos’ capsule, the New Shepard, named after the first American in space, Alan Shephard, is a lot different than Branson’s Spaceship 2. Whereas Spaceship 2 was released by a mothership, the New Shepard lifted off from a launchpad near Van Horn, Texas. The rocket flew directly upward at around 3 times the speed of sound until the capsule separated and continued climbing until reaching a height of over 62 miles, bettering Branson’s flight by passing over the “Kármán line”, a line that defines the edge of space.

While Spaceship 2 returned to Earth much like an airplane, landing with wings spread on a runway, the New Shepard’s descent was slowed by parachutes to 15 mph before hitting Texas dirt. The impact was further cushioned by shock-absorbent seats. The booster landed perfectly on its pad in an upright position, firing retrorockets as it lowered to Earth, looking like a scene from a sci-fi movie. And then suddenly Jeff Bezos had successfully completed yet another one-day delivery.

The astronauts waited inside the capsule for a few minutes for the arrival of 10 pickups and SUVs carrying on-ground crew members and family. Nearly everyone was wearing a cowboy hat. They gathered around the capsule, and after the vehicle was grounded from heavy static electricity, the doors were opened, and the crew emerged walking down a short set of blue steel steps to open arms and cheers. Newly commissioned astronaut Wally Funk stepped out with a large grin and with her arms spread wide. She had waited for over 60 years for this moment.

Two more flights are scheduled from Blue Origin for 2021 and tickets are on sale now.