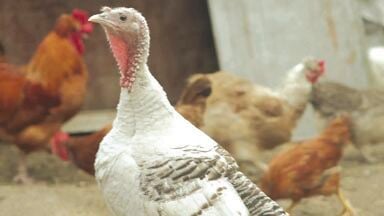 Thanksgiving is again upon us and during this time of year, a discussion about turkeys seems appropriate. A lot of doomed turkeys have been working on their bucket list lately, but two lucky 40-pound birds got off scot-free thanks to the pardon they received from President Biden last Friday. “Peanut Butter and Jelly were selected based on their temperament, appearance, and I suspect, vaccination status,” Mr. Biden said in a ceremony held in a Rose Garden ceremony. “Yes, instead of getting basted, these two turkeys are getting boosted.”

“Turkey is infrastructure,” Biden continued as he stood with the birds. “Peanut Butter and Jelly are going to help build back the Butterball.” Peanut Butter (this year’s National Turkey) and Jelly (the alternate) heckled Mr. Biden during his eight-minute speech by gobbling loudly, showing little respect for the president nor appreciation for their pardons. The pair will live out the rest of their lives at Purdue University in West Lafayette, Indiana, once home to both Neil Armstrong and Amelia Earhart.

Presidents have been receiving these birds as gifts for many years starting with President Lincoln who didn’t officially pardon one but told the White House to spare a turkey at the urging of his rambunctious son, Tad, who had grown fond of the gift. President Kennedy was given a live turkey that had a sign hanging around its neck saying, “Good eating, Mr. President”. Although he also did not officially “pardon” the turkey, he announced he would not be eating it. Three days later he was assassinated in Dallas.

Official turkey pardoning at the White House was started in 1989 by President George H.W. Bush when he pardoned “Liberty” and “Freedom”, so named in the wake of the 9/11 attacks. There are always two turkeys, and they are always named in pairs, such as Mac and Cheese and Tater and Tot, all spared by President Obama. President Trump gave pardons to Drumstick and Wishbone and later Corn and Cob.

Most of us eat pretty much the same meal on Thanksgiving Day. I know this to be true because I see all the same dishes posted on Facebook every year. There may be some variations in the sides and different recipes for dressing (or stuffing — think Yankee food) but we all generally stick to tradition.

Some vegetarians use recipes that call for “Tofurky” which is tofu “turkey”. I imagine they generally don’t go back for seconds like most of us do. Y’all go ahead and help yourselves, I’ll pass on anything that has tofu in it. And in some parts of Pennsylvania, folks call their dressing “filling” and mix it up with mashed potatoes of all things. I’ve even seen some so-called cooks add black olives to the mixture, thus ruining an otherwise delicious dish.

Eighty-eight percent of Americans eat turkey on Thanksgiving Day which comes to around 46 million platters of the tasty bird. When Christmas rolls around just over a month later, we eat another 22 million turkeys at our festive meals.

You can cook a turkey in a slow cooker, an air fryer, or a convection or normal oven. You can also smoke it, deep fry in a pot of peanut oil, or roast it on a spit like the Pilgrims did. It doesn’t really matter. Turkey meat is delicious no matter how you cook it. White or dark.

The bird that graces our holiday tables each year is indeed a unique American bird, a species native only to the Americas. According to a myth, the turkey nearly landed a spot on the Seal of the United States due to a suggestion by Benjamin Franklin, but he was criticizing the design of the bald eagle on the seal in a letter to his daughter saying it looked more like a turkey than the majestic eagle.

There are some who say that second to the sloth, the domesticated turkey is probably the dumbest animal on the face of the earth. The explanation is that they sometimes drown during a rainstorm because they just like to stare straight up at the sky while it’s raining. Scientists say this is due to a hereditary condition called tetanic torticollar spasms that occasionally cause them to stare upwards into space. Not necessarily looking at anything, just staring stupidly. I’ve seen people do that, also.

Then there are others who argue that turkeys are getting a bum rap. Even the name turkey is synonymous with an inept, slow-witted person and is a stereotype that needs to be changed in these days of equal fairness for all.

According to an Oregon State University poultry scientist who has studied turkeys for over 30 years, it’s time the big birds get a little respect. He did agree that turkeys look stupid, especially when they’re running. The scientist said, “I work with the animals, I talk to them, I observe them to be sure of their well-being and find out how they do when they are stressed -- you get attached to them. I’m an advocate for turkeys. Except on Thanksgiving…” No doubt.

Steve Reece of Forsyth is a contributing writer for the Reporter and a known crime fighter. Email him at stevereece@gmail.com.