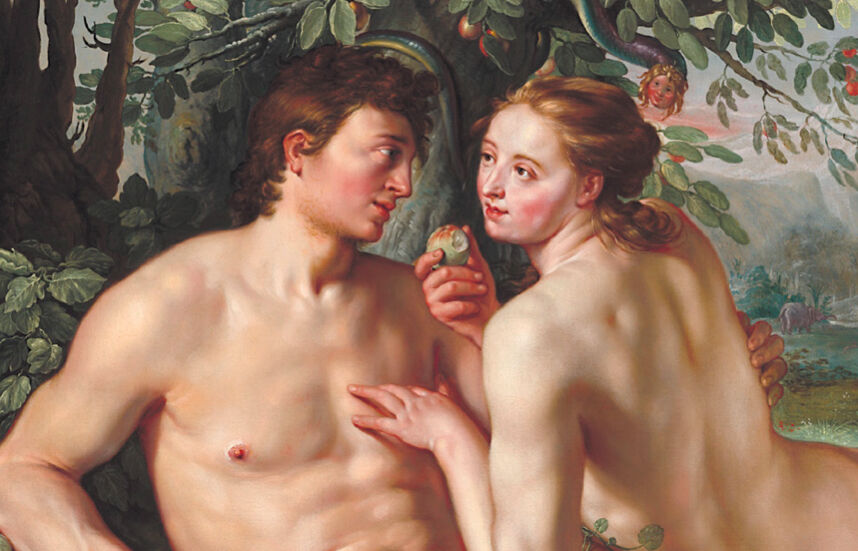 It took the power of Satan to tempt Eve to sample the fruit from the Tree of Knowledge in the Garden of Eden but merely the beauty of a woman to take down Adam. What if, when Eve offered the forbidden morsel to Adam, he refused to partake in that sinful harvest? What if he had done the smart and correct thing and resisted the temptation of his beautiful wife? He could’ve walked away from the whole ugly affair and he would’ve lived forever.

But I’m not sure how that would’ve worked. Would we be living in a world full of old holy men with sinful wives who keep dying off? As it turns out, we are all sinners. Not just half of us.

Most of us think it was an apple that was eaten but I tend to believe it was a fig. After all, immediately after committing that first sin they realized their nakedness and were ashamed and adorned themselves with loincloths made from leaves pulled from a fig tree. An odd thing about the material used in this early wardrobe choice is that fig leaves are very irritating to the skin and can cause itching and even blisters. These rashes aren’t pretty. With no anti-itching cream available in Paradise, it must have been extremely uncomfortable. Thus, began the woes of mankind and the beginning of fashion.

Adam and Eve were cast out of Paradise immediately after committing the original sin, but God soon took pity on them and gave them garments He Himself created from animal skins. They wouldn’t be considered fashionable in today’s world, but the descendants of the world’s first couple continued wearing animal coverings for many generations.

Then the fashion scene slowly started to evolve. One tribe noticed another tribe sporting some nice animal skin suits made from striped raccoon skins. Not to be outdone, the first tribe gathered up some skunk skins and stitched them together for a nice contrasting black and white effect. They made quite the fashion statement as they grunted around the campfire.

Skip ahead a few thousand years and we find the Romans and Egyptians taking great interest in their appearance. Especially those in important positions who could afford fancy duds. Rulers thought it necessary to distinguish themselves from the common working man and Roman emperors wore only the most expensive, made from the rarest and finest materials. The Emperor was always instantly recognized by what he wore. He was also the only one in the empire allowed to wear the color purple.

Around the same time, pharaohs were making a big splash among their subjects by wearing half-pleated kilts wound around their waists, leopard skins over their shoulders, and lion tails hanging from their belts. They capped off this regal look with a fancy crown that featured a golden cobra as a centerpiece.

During the Middle Ages, clothing started to become what we think of today as fashion. It began slowly at first. Today, we watch fashion change from season to season, while their clothing designs changed from generation to generation. When the Crusades came along and Marco Polo did all his bragging about his adventures and introducing new cultural influences and fabrics, great technological advances soon came to medieval European garments.

The handheld spindle was replaced by the much faster spinning wheel and horizontal foot looms with foot treadles and  the production of textiles and clothing exploded. Attractive garb became more affordable and within the reach of the emerging middle class who began to emulate the styles of the rich elite.

In modern times, an Englishman  by the name of Charles Frederick Worth moved to Paris in 1858 and established a fashion salon that soon attracted European royalty. He was an innovative designer and adapted his 19th-century dresses to make them more suitable for everyday women. He was the first to use models to showcase his creations and also the first to sew branded labels into his clothing. Suddenly simple dressmakers became arbiters of what women should wear and fashionistas came into being.

Then came the twentieth century with the flappers in the 20’s with their bare shoulders and sleeveless dresses. This was the time women started shaving their armpits as well.  The miniskirts of the ’60s caused quite a stir, of course, and men’s styles raised some eyebrows when they started wearing bellbottoms, beads and long hair . My military dad wore me out more than once for coming home looking like a hippie.

In his later years, my hair was much shorter and my dad’s much longer. Way longer than mine ever was back in 1969. Matching his hair was a long gray beard. I once gathered up enough courage, approached him and said, “Daddy, don’t you remember you used to whoop my butt for looking the way you do now?” My old man looked me straight in the eye and said, “Boy, I’ll still whoop your butt!”