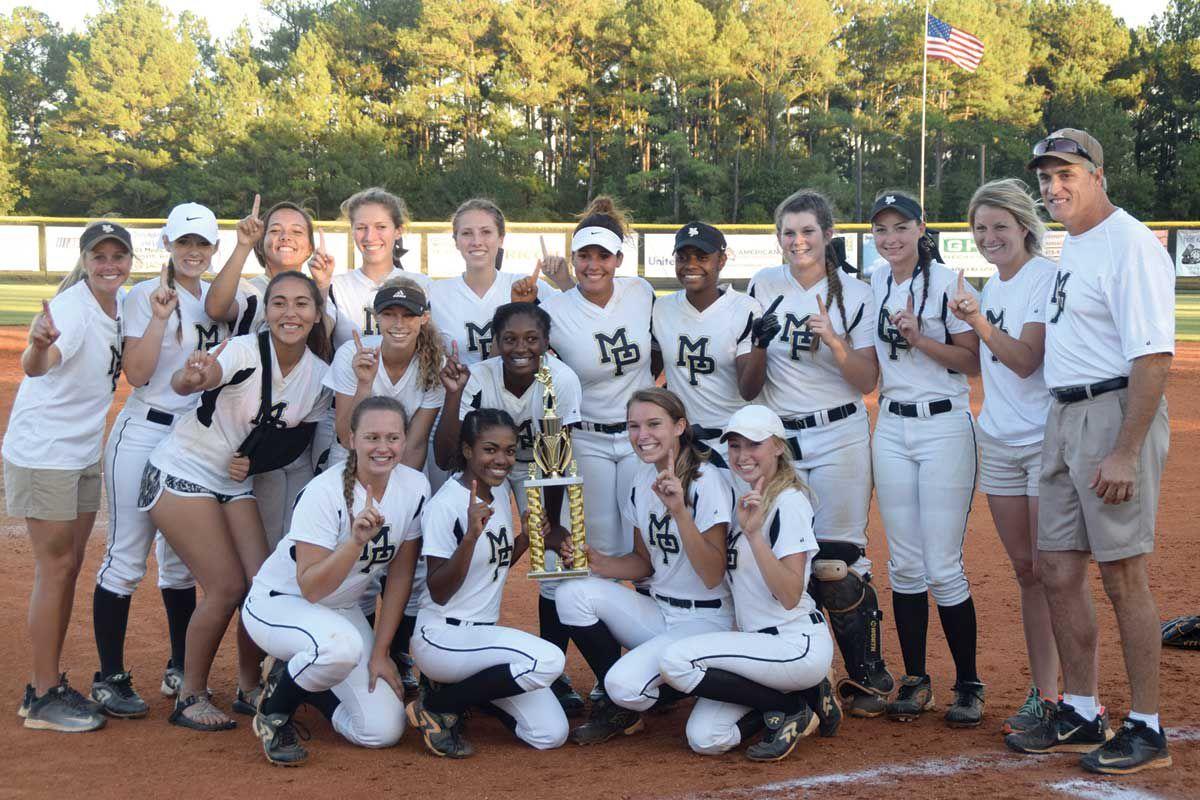 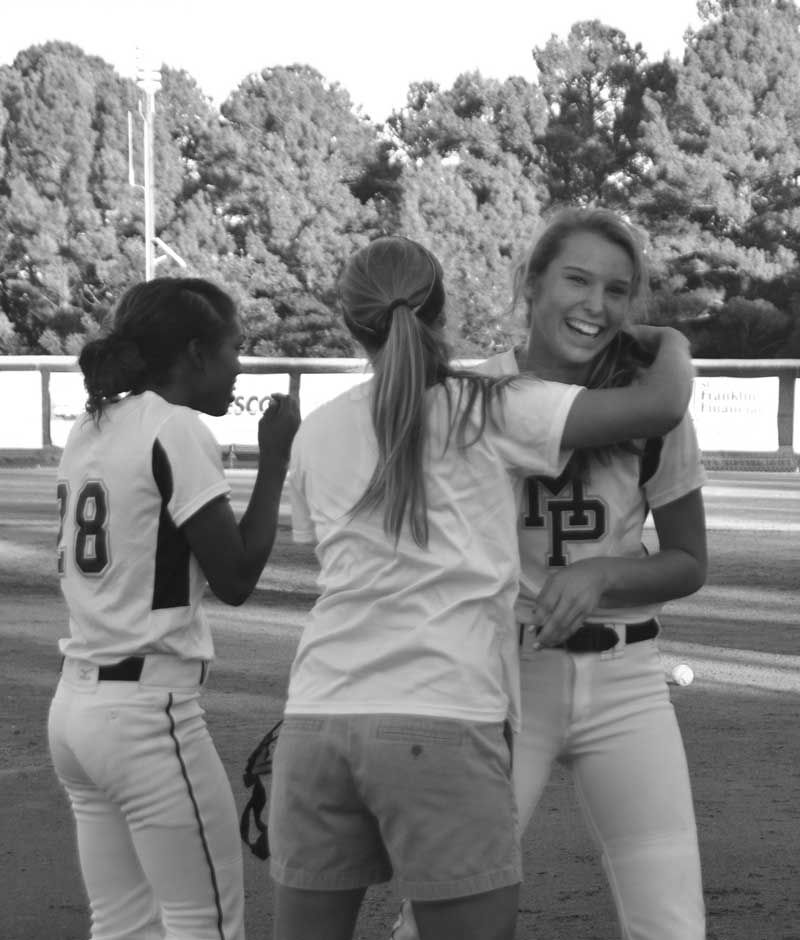 The Mary Persons softball team will enter the state tournament as a top seed after capturing the program’s first-ever Region 2-AAAA championship with a 2-1 Best-of-3 series victory over West Laurens on Thursday.

After coming close to taking the title in previous seasons, the Lady Dogs finally got over the hump on Thursday, and it took until their very last at-bat to do it. Senior Alexis Passmore singled a hard groundball up the middle that deflected off the glove of sterling Lady Raiders’ shortstop Taylor Cobb into centerfield with one out in the top of the seventh inning in Game 3 on Thursday. Passmore’s hit scored Destiny Middleton from second base and gave the Lady Dogs a 2-1 victory in the deciding contest. In all three games in the championship series, the Lady Dogs and Lady Raiders were never separated by more than a single run in 21 innings of regulation.

Passmore, one of seven MP seniors who have played varsity together for four years, said of the winning moment: “It means a lot just because I got up there and I was like: ‘It’s our senior year and Mary Persons has never had this region title.’ And so I just said: ‘Let me just hit it on the ground, Lord.’ And when I hit it and Destiny scored, I was so proud because we’d worked so hard for it.”

Passmore added of the tenseness of the championship series: “I play travel ball, and that was probably more nervous than any game I’ve played.”

MP bounced back from a disappointing 1-0 shutout loss in Game 1 to defeat West Laurens 4-3 in 8 innings in Game 2 on Wednesday night. The split on Wednesday set up a winner-take-all Game 3 on Thursday. With the victory on Thursday, the Lady Dogs, 23-6 overall (14-1 in Region 2-AAAA), tied the school record for most wins in a single season with 23.

The Lady Dogs will next host Salem, the No. 4 seed from Region 4-AAAA in the first round of the AAAA state playoffs beginning with Game 1 at 5 p.m. on Wednesday. Game 2 will be played on Wednesday night about a half-hour following the conclusion of Game 1. Game 3, if necessary, would be played at 5 p.m. on Thursday. If MP advances, the Lady Dogs would host the winner of the first round series between LaFayette, the No. 3 seed from Region 6-AAAA, and Stephens County, the No. 2 seed from Region 8-AAAA, in the second round starting on Wednesday, Oct. 19. MP has never advanced past the second round in program history.

MP head coach Hannah Grossman said MP’s two major goals from the start of the season were to win the region title and to advance to the Elite Eight for the first time. Now that the first mission is complete, MP will turn its attention to the second on Wednesday.

Passmore said of the playoffs: “MaxPreps (high school softball website) predicted us to be sixth, so we’re trying to prove people wrong and we’re going to go all the way.”

MP senior Megan Bell threw all 22 innings in the series, bouncing back from a wild outing in Game 1 to record wins in both the second and third contests. Bell admitted she fought nerves in Game 1, but said she was confident her defense would back her up if needed in Game 3.

Star senior catcher Alyssah Mullis, who was pitched around all series long by Lady Raiders’ ace Ariel Edenfield but caught all 22 innings in the series, said Bell was “outstanding” in Game 3.

Mullis said of the title victory: “It’s the best thing that’s probably ever happened in the four years I’ve been playing. I wouldn’t have wanted it to happen any other year.”

The Lady Dogs, who were visitors in Game 3 after losing a pre-game coin toss, used small-ball to open Game 3 with a first-inning run. Middleton led off the game with a single before Passmore bunted her over to second. Mullis then ripped a line-drive single to left, plating Passmore. However, MP’s opportunity to add to its early lead was thwarted when Edenfield induced No. 5 hitter Jordan Rozier to hit into a double play to end the threat.

Bell then pitched outstanding ball in the clutch in the early innings, stranding five West Laurens’ runners on base in the first three innings combined. After Edenfield settled down and silenced the MP bats over the next three innings, Bell finally blinked in the bottom of the fourth. The Lady Raiders’ Ja’Kerra Wilbur squeezed a bunt down the first base line with the bases juiced to plate Kiya Springer for the tying run. Things could have been worse for the Lady Dogs, but Passmore gunned out a Lady Raiders’ runner at home plate later in the inning. Then, with two outs, Bell got out of a bases-loaded jam by forcing Hailey Sapp to ground out to Passmore for the inning’s final out.

MP threatened in the top of the fifth after a pair of one-out singles by Middleton and Passmore. However, Edenfield got out powerful hitters Mullis and Kiambra Zellner back-to-back to end the inning. Bell only allowed a single baserunner over the next two innings, setting the stage for Passmore’s heroics in the top of the seventh.

After MP was unable to add to its lead, it was up to Bell to close out the contest. Bell was up to the challenge, setting down the Lady Raiders’ 1-2-3, including a game-ending strikeout in the bottom of the seventh.

Grossman said MP’s improved patience at the plate was the biggest difference between its loss in Game 1 and its back-to-back wins to capture the title.

“The first couple of games we played them, especially the first game that we played them in the series, we were swinging at the first pitch every single time,” Grossman said. “I think their pitcher pitched half as many as what our pitcher did. And it showed in the score. And then the second game we made her pitch a few more and this game it was from the get go that we made their pitcher work. We waited on our pitch, and it helped. We knew the hits would fall eventually, and we worked hard for it. We’ve been hitting the ball well, and we were due.”

Grossman said it was fitting that Passmore, a beloved player on the team, was the one to deliver the championship base hit.

“She’s a senior. She was ready for it,” Grossman said of Passmore. “She has so much heart and love for the game. She’s so positive. She’s such a positive person. And when anybody tries to get down, she’s always trying to pick somebody up, finding ways, telling everybody we can do it. And this time it was her. She was in the spot, and she did it herself. So I couldn’t be more proud. It was such a reward for her.”

MP fell behind in the series after West Laurens’ Springer scored the game’s lone run of Game 1 on a bases-loaded walk issued by Bell in the top of the fourth inning. MP was fortunate to yield just one run, as the senior ace escaped a bases-loaded, no-out jam with just a single run crossing the plate. MP had its best chance to tie in the bottom of the sixth, but Rozier and Bell each failed to get a timely base hit with runners on first and second. Although Bell retired the final 12 batters she faced in Game 1, her performance was exceeded by Edenfield, who threw a complete-game shutout while preventing MP hitters from getting a ball out of the infield during a perfect bottom of the seventh.

MP then rallied back in a wild Game 2 that again pitted Edenfield and Bell. The Lady Raiders scored the game’s first run in the bottom of the second on a sacrifice fly by DeAsia Lowther. Things could have gotten worse for MP except that Springer was called out at home plate later in the inning despite appearing to be safe. MP then evened the contest at 1-1 in the top of the third on an RBI single by Zellner, plating Passmore. MP was unable to take the lead, however, as Tiella Banks flew out with the bases loaded to end the inning.

Things then got increasingly weird in the top of the fifth when a Mary Persons’ runner collided with third base coach Sonny Trammell while trying to score and take the lead. Instead, the runner was tagged out at home plate for the final out of the inning.

Then, one inning later in the top of the sixth, MP finally seized its first advantage of the series. Lori Smith drove a one-out double over the head of West Laurens’ leftfielder. Smith later slid home safely on an Edenfield wild pitch to put MP in front 2-1. However, Bell was unable to finish the game off in the bottom of the seventh as a Lady Raiders’ pinch hitter, Miranda Thigpen, roped a two-out, RBI double down the leftfield line to tie the score at 2-2.

The two teams then applied the GHSA’s extra-inning rule of allowing each team to have a runner at second base with no outs in the eighth inning. Smith drove in one run on an RBI groundout to third. MP then added a second run, which turned out to be the game-winner, on an RBI single by Middleton that fell just in front of the Lady Raiders’ leftfielder.

It appeared West Laurens could be poised to steal the title away in the bottom of the eighth. The Lady Raiders cut MP’s lead to 4-3 on an RBI single by Sapp with no outs. With the bases loaded and no outs, Bell wriggled out of trouble, striking out her counterpart Edenfield on an inside fastball for the first out. She then turned to Middleton to save the Lady Dogs on the final two outs. Middleton fielded a grounder and threw to Mullis at home plate for a force out for the second out. Then, West Laurens’ Lowther crushed a line drive right over Middleton’s head, but the athletic sophomore gave a slight leap and snagged it cleanly for the final out and a 4-3 MP win.