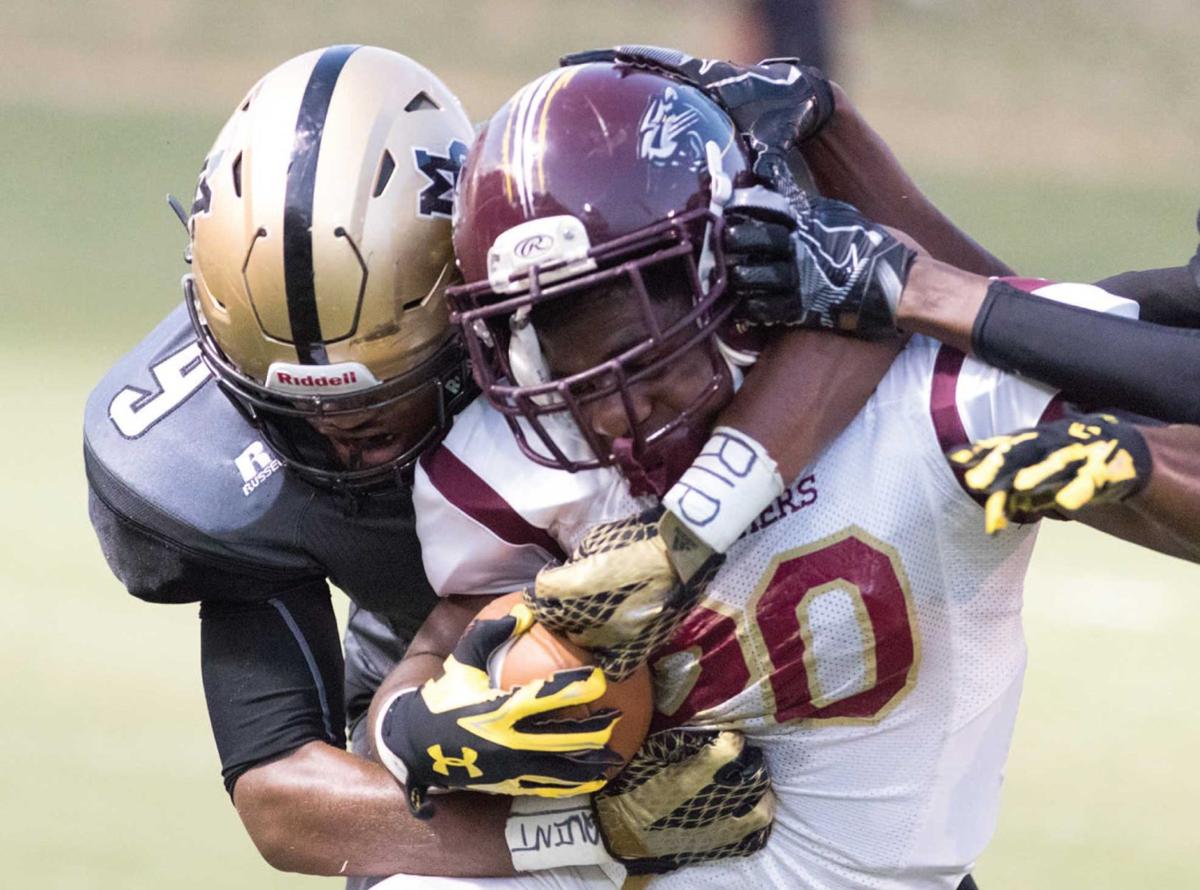 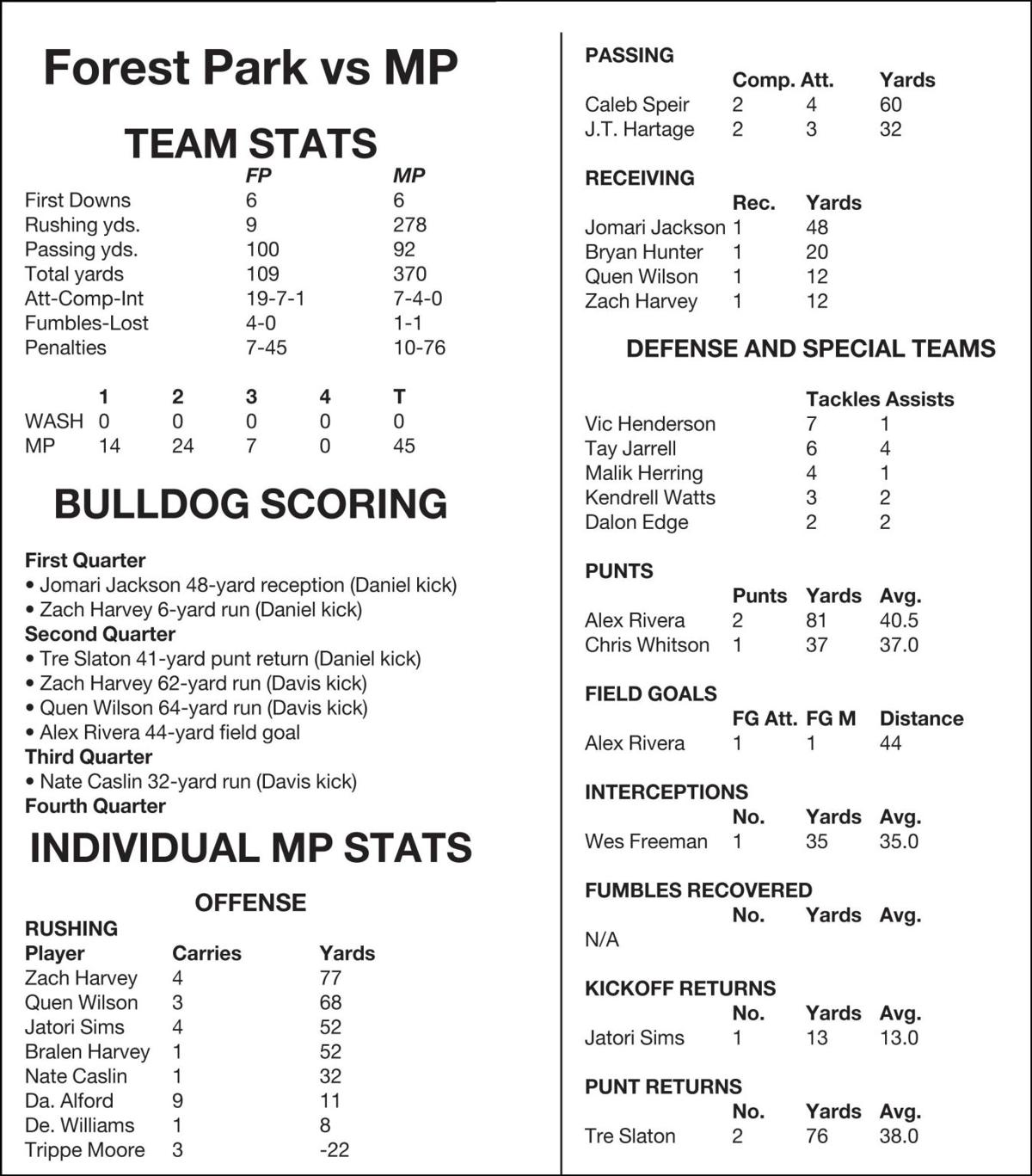 The Mary Persons Bulldogs easily took care of business in their simplest test of the season at Dan Pitts Stadium on Friday, pounding visiting Forest Park 45-0 to improve to 3-1.

In a game in which there were no delays, unlike the Bulldogs’ stadium light debacle the previous week, MP wasted little time making its mark on the scoreboard. The Bulldogs scored early and often, amassing 38 points in all in the first half. With MP leading by more than 30 points at halftime, the Georgia High School Association mercy rule went into effect, and the entire second half was played with a running clock.

The Bulldogs accumulated 370 total yards of offense, including 278 on the ground. No MP halfback reached 100 yards, but four backs, Zach Harvey, Quen Wilson, Jatori Sims and Bralen Harvey, had at least 52 yards. Meanwhile, the MP defense pitched its second straight shutout, holding the Panthers to just 109 total yards, including just 9 yards on 27 carries on the ground. MP has now gone 10 consecutive quarters without allowing a touchdown.

After MP’s defense forced Forest Park into a three-and-out on its first possession, MP’s offense struck quickly. On the second play from scrimmage, senior quarterback Caleb Speir connected with senior receiver Jomari Jackson for a 48-yard touchdown in which Jackson beat his defender one-on-one, allowing Speir time to loft a perfect pass over the top of the Panthers’ secondary. Dawson Daniel’s extra point put MP in front 7-0 with 9:40 left in the first quarter.

After a 35-yard punt return by MP’s Tre Slaton set the Dogs’ offense up at the Forest Park 15-yard-line, it only took MP three plays to add to its lead. Harvey ran a draw to the right before bouncing further outside for an easy six-yard TD. Daniel’s extra point gave MP a 14-0 lead with 5:46 left in the first quarter.

After the two teams each punted, Forest Park’s next possession ended in a sack by MP senior Malik Herring on the final play of the first quarter. Slaton then brought continued excitement on the first play of the second quarter when he caught a Forest Park punt on the right side of the field at the Panthers’ 41-yard-line. He scampered to his left and reversed field where MP had set up a row of blockers. Just as Slaton crossed the goal line, he was belted by a Forest Park defender but the hit was too late to prevent the touchdown return. Daniel’s third extra point of the contest put the Bulldogs’ ahead 21-0 with 11:48 left in the second quarter.

It took MP just one play and 12 seconds to score on its next offensive possession. Harvey took a toss sweep to the left and exploded untouched up the middle for a 62-yard score. James Davis’ PAT gave MP a 28-0 advantage with 9:26 left before halftime.

Already trailing by four scores, Forest Park mounted its lone sustained drive of the first half thanks to a 71-yard kick return. However, the Panthers’ best chance to get on the scoreboard ended when Forest Park missed a 24-yard field goal attempt wide right.

MP then tacked on yet another score with 2:28 left in the second quarter when Quen Wilson burst to daylight through a hole on the right side of the line for a 64-yard touchdown. Davis’ extra point put MP in front 35-0 in a drive that was even shorter than the previous scoring drive, 11 seconds.

After MP’s Jumon Wilson stopped Forest Park’s final series of the half with a key third-down sack, the Dogs further added to their lead with 1.8 seconds left in the half when junior kicker Alex Rivera drilled a 44-yard field goal straight down the middle with plenty of distance. The kick put MP ahead 38-0 at halftime.

MP head coach Brian Nelson turned almost exclusively to backups in the second half. The Bulldogs scored their lone touchdown of the second half with 4:22 left in the third quarter when sophomore Nate Caslin found a gaping hole on the right side and scampered 32 yards for a score. Davis’ third extra point gave MP the final 45-0 margin.

MP’s defense added one final highlight with just under two minutes remaining in the game when senior Wes Freeman intercepted a pass by Forest Park’s Rayshawn Meiser and returned it 35 yards.

The victory was an enjoyable end to a sad week for the MP program. Kenny Alford, the father of senior reserve running back Da’Kendre Alford, passed away unexpectedly on Sept. 4. Alford, whose father was buried earlier in the day, played on Friday night, getting a team-high 9 carries for 11 yards.

Nelson said of Alford: “The thing we talk about is this is a family too. So when somebody in your family is suffering or hurting, then this family supports them too. Some of the seniors went over and saw him Sunday. I went over and saw him Sunday. And then he actually came to school and practiced on Tuesday. And then the funeral was today, and me and all the senior players went to the funeral. And then I told Da’Kendre and his mama, ‘If and when, whenever there comes a time, just come on back when you’re ready. If not, we understand.’ And he showed up here tonight and said, ‘Coach, I want to play.’ So we suited him up and let him get in there. And he and his dad were close. His dad really loved him and loved Mary Persons football and was real proud of his son being able to be on the team and play. And so it’s tough on Da’Kendre, but he’s got a support system here and he’s got a good support system at home. So it’s one of those things that you really can’t explain. It just kind of stinks.”

Nelson, who admitted he was hoping Alford would score a touchdown on Friday, said he didn’t give Alford extra carries on Friday due to his family situation but because he’s earned them on the practice field.

“He’s one of the hardest working kids we’ve got,” Nelson said. “He’s always where he’s supposed to be. He’s on time. He’s reliable. He’s dependable. He’s accountable. So it wasn’t just because of what happened. He deserves opportunities because he’s worked for it, and that’s why he gets those opportunities. And I think he understands that.”

Nelson said he was pleased that a number of his underclassmen got extensive varsity action as well.

“Yeah, we were just trying to a bunch of guys in there,” he said. “Nate Caslin ran in a touchdown. Some of those young guys on defense did some good things. Rivera had the field goal. It’s always good because those kids work just as hard as everybody else, and not everybody comes on Thursday to watch them play. So it’s good for them to get out on Friday night, and then you can evaluate and see what kids have got. And some guys earn more playing time based on how they perform in a game situation. It’s always nice to be able to get everybody in the game.”