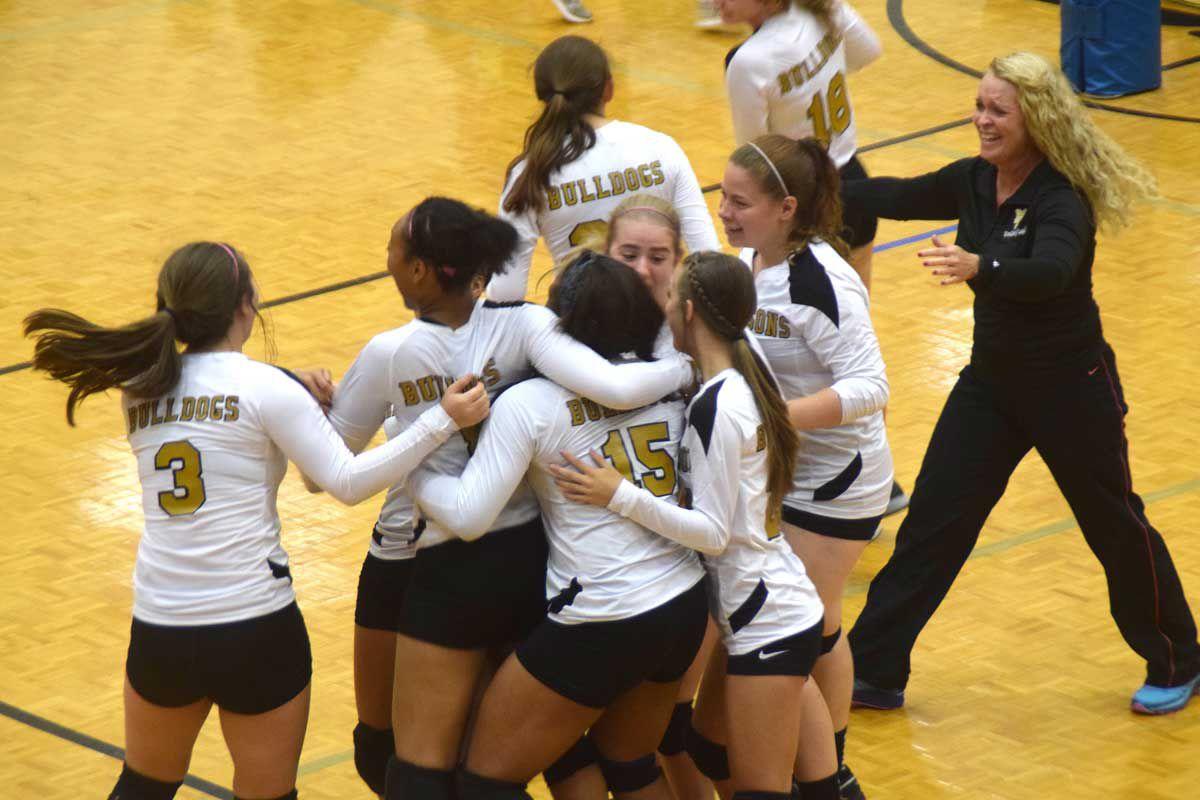 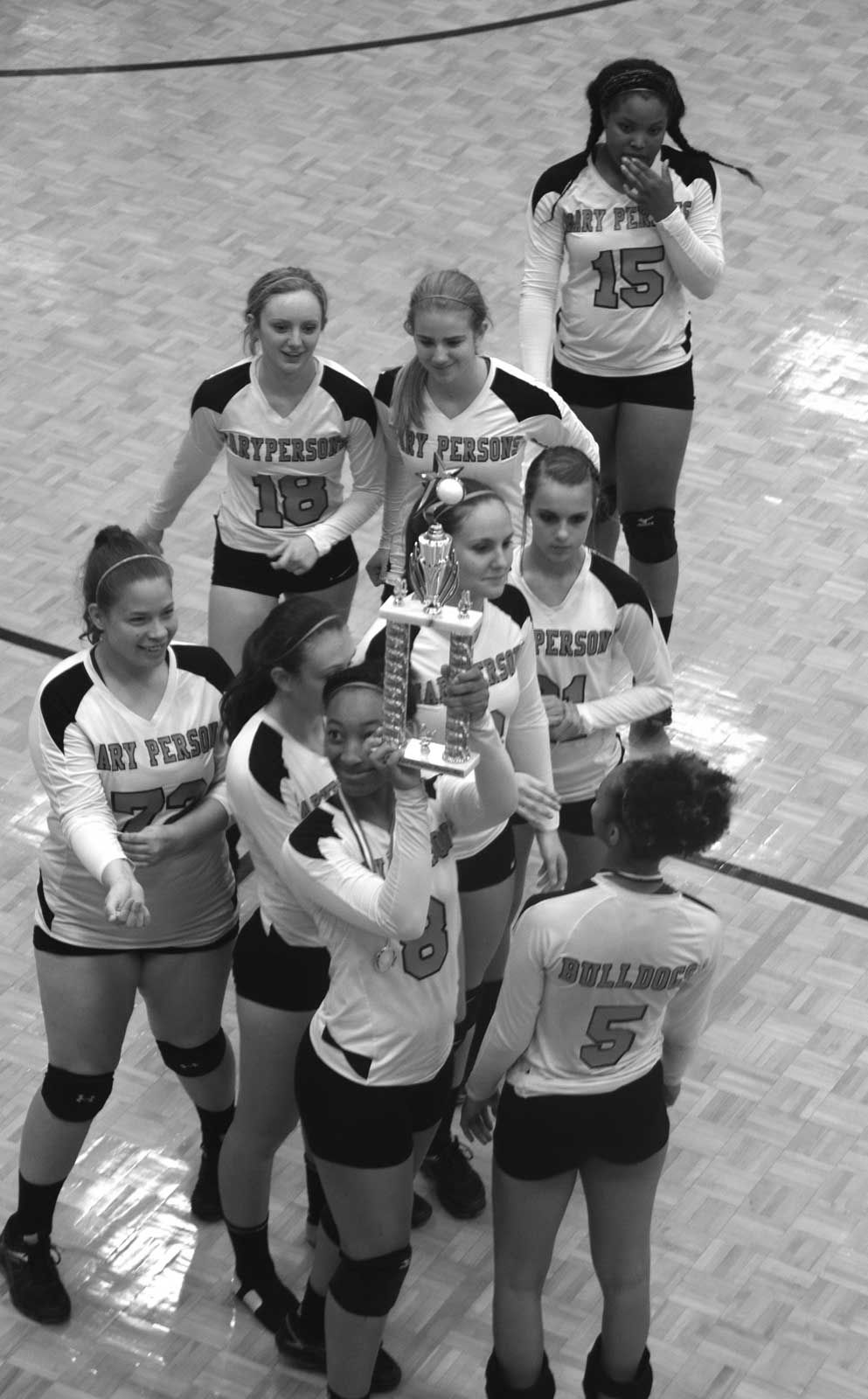 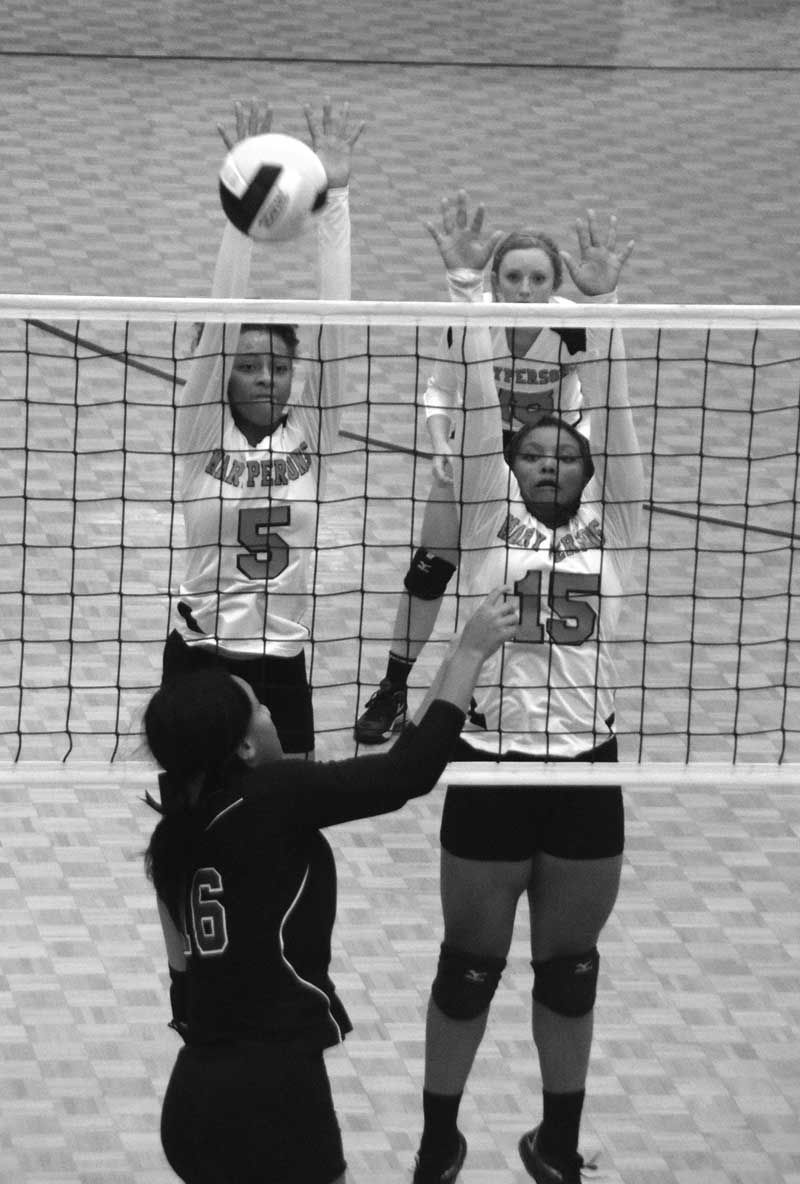 Mary Persons seniors Olympia High and Carmen Ralls team up for a block party on a spike attempt by an Upson-Lee player in a semifinal win. (Photo/Richard Dumas)

Mary Persons seniors Olympia High and Carmen Ralls team up for a block party on a spike attempt by an Upson-Lee player in a semifinal win. (Photo/Richard Dumas)

With their unexpected second-place finish in Area 2-AAAA on Saturday, the Mary Persons Lady Bulldogs volleyball team will host a first-round AAAA state playoff match at 5 p.m on Thursday.

MP will host Oconee County, the No. 3 seed from Area 8-AAAA, at 5 p.m. on Thursday. If MP advances, it would play the winner of the first-round match between White County, the No. 4 seed in Area 7-AAAA, and Woodward Academy, the No. 1 seed in Area 4-AAAA. If Woodward wins as expected, MP would travel to College Park to face the War Eagles on Tuesday, Oct. 18.

After an up-and-down regular season that ended with a 7-15 record after a pair of road losses to Locust Grove and Woodland (Henry) on Oct. 4, the Lady Dogs gave MP volleyball fans a dream-like Saturday when they nearly captured an area title on their home court. The Area 2-AAAA tournament was supposed to be hosted by West Laurens, but it was moved to MP’s James P. Evans Gymnasium at the last minute on Thursday due to I-16 East being shut down by Hurricane Matthew. Thanks to the hurricane conditions and the late location change, the tournament was sparsely attended. In fact, Saturday’s Best-of-5 championship match between West Laurens and MP was contested in front of fewer than 100 fans.

Nevertheless, it was the Lady Dogs who gave the tourney a surprising jolt when they not only defeated Spalding in straight sets to begin the day, but they then took top-seeded Upson-Lee to three sets in their second contest of the double-elimination tourney.

After upsetting Perry and Upson-Lee in back-to-back contests, the Lady Dogs found themselves in a most unlikely spot, playing for the area championship against undefeated West Laurens. Instead of forcing MP to beat the Lady Raiders twice, the GHSA opted instead for a Best-of-5 championship match format. By the time MP reached the final late Saturday afternoon, the Lady Dogs had already played four Best-of-3 matches using primarily six players, seniors Keajia Campbell, Olympia High and Carmen Ralls and juniors Kendal Bunn, Georgia Wilcox and Christa Willingham. The Lady Dogs appeared tired in the first set, losing the first five points of the set en route to falling behind 18-5. West Laurens, which had rested for several hours since their last match, was buoyed by the presence of 2016 Area 1-AAAA Player of the Year Cedrianna “C.C.” Davis, who put the Lady Raiders up by 13 with a block and spike on the same possession. The Lady Raiders would go on to close out the first set on a Davis lefty spike for a blowout 25-9 opening-set win.

But it was MP who would gain strength in the second set. After falling behind 4-1 to the Lady Raiders, MP’s High took over the second set. High’s two-hand tip winner drew the Lady Dogs to within one at 6-5. Moments later, High gave MP a one-point edge at 7-6 on a serve that clipped the net and fell over. Five straight West Laurens’ points would put the Lady Raiders in front 16-13, but the Lady Dogs would again claw back. Great hustle by MP’s Ralls on a dig and a spike tied the second set at 17-17. MP then capped a string of five straight points when Campbell bumped a shot over her shoulder just inside the back line to put the Lady Dogs up 20-17. Leading 21-18, MP reeled off the final four points of the set. Campbell’s block put MP in front 22-18. Bunn then extended the Lady Dogs’ edge with an unreturned serve, followed by an errant spike try by West Laurens’ Davis. Needing one more point to seal the second set and square the match at one-set apiece, Campbell came up with a block for the 25-18 second-set victory.

The third set was tied at 8-8 until West Laurens went on a 11-3 run to go up 19-11. Four straight MP points, including back-to-back spikes by High, drew MP back to within four at 19-15, but it was as close as the Lady Dogs would get. The Lady Raiders surged back out to an eight-point lead at 24-16, needing just a point to take a two-sets-to-one lead. MP fought valiantly, picking off three straight points to pull to within 24-19 before Davis hammered a hard spike for the winning point and a 25-19 third-set win.

Needing a fourth-set win to force a deciding fifth set, MP came out of the gates strong. Willingham tied the game at 1-1 with a spike, followed by back-to-back High winners and an unreturned serve by Willingham, respectively, to go up 4-1. MP led by four at 8-4 moments later after a pair of aces by High. However, the Lady Raiders would answer MP’s surge moments later with six straight points to go up by three at 14-11. A spike by Cammy Hatchett several points later meant the Lady Raiders had won nine of 10 points to seize a 17-12 advantage.

It was a desperate time for the Lady Dogs to make one final push, and that’s what they did. Four straight MP points pulled the Lady Dogs back to within one point at 18-17. But Davis then took over the latter stages of the match, winning two of three points with a lefty tip and a right-handed spike, respectively. With West Laurens needing a single point for a championship at 24-18, once again MP made the Lady Raiders wait to clinch. Two straight MP points, including a Willingham spike, drew the Lady Dogs to within four at 24-20. However, the Lady Raiders finally closed out the hard-fought match with a 25-20 fourth-set win to capture the area title.

Moments before receiving their championship trophy, the Lady Raiders got an additional bit of good news when Davis was named Area Player of the Year and Raiders’ head coach Tammy Horne was named Area Coach of the Year. Three MP players also received All-Area honors with High and Campbell named to the First Team and Wilcox named Honorable Mention.

MP advanced to the finals by stunning Upson-Lee in the semifinals. Just hours after losing to the Lady Knights, the Lady Dogs got a second shot and took advantage. The Lady Dogs broke a 20-20 first-set tie with a pair of unreturned serves by High to go up 22-20. Leading by one at 23-22, Campbell seized control of the match with back-to-back winning spikes to give the Lady Dogs a 25-22 first-set victory. Upson-Lee then dominated the second set 25-14 to force a decisive final set in which the winner was the first to 15 points. Tied at 13-all, Campbell spiked unsuccessfully into the net, giving the Lady Knights a match point leading 14-13. However, Campbell got yet another chance at a spike and she delivered on her second try to tie the third set back up at 14-all. With Campbell serving, High tipped over a winner to put MP in front 15-14. Needing to win by two, Campbell hit an excellent serve that deflected off the hands of an Upson-Lee player to give MP a 16-14 third-set win.

After dropping the first match to the Lady Knights, the Lady Dogs played an elimination match against Perry in the quarterfinals. Tied at 24-all in the first set, MP took advantage of an errant Lady Panthers’ serve to take a 25-24 lead. The Lady Dogs then closed out the first set on the very next point when Willingham’s pinpoint serve hit the back line and was called in for a 26-24 first-set win. MP then defeated Perry 25-19 in the second set, closing out the match on a spike winner by High.

MP head coach Marcy Sanders said her players have worked hard all year and listened to the coaching staff. She said she had no doubt her squad, which enters the state tournament with a 10-17 record, would perform well on Saturday.

Sanders said, “Our players were mentally and physically prepared to perform on Saturday.”

She added, “I had no doubt that our team would come out on top. We have the talent, motivation and work ethic. If we could have minimized our fundamental mistakes, we would have finished at a higher seed.”