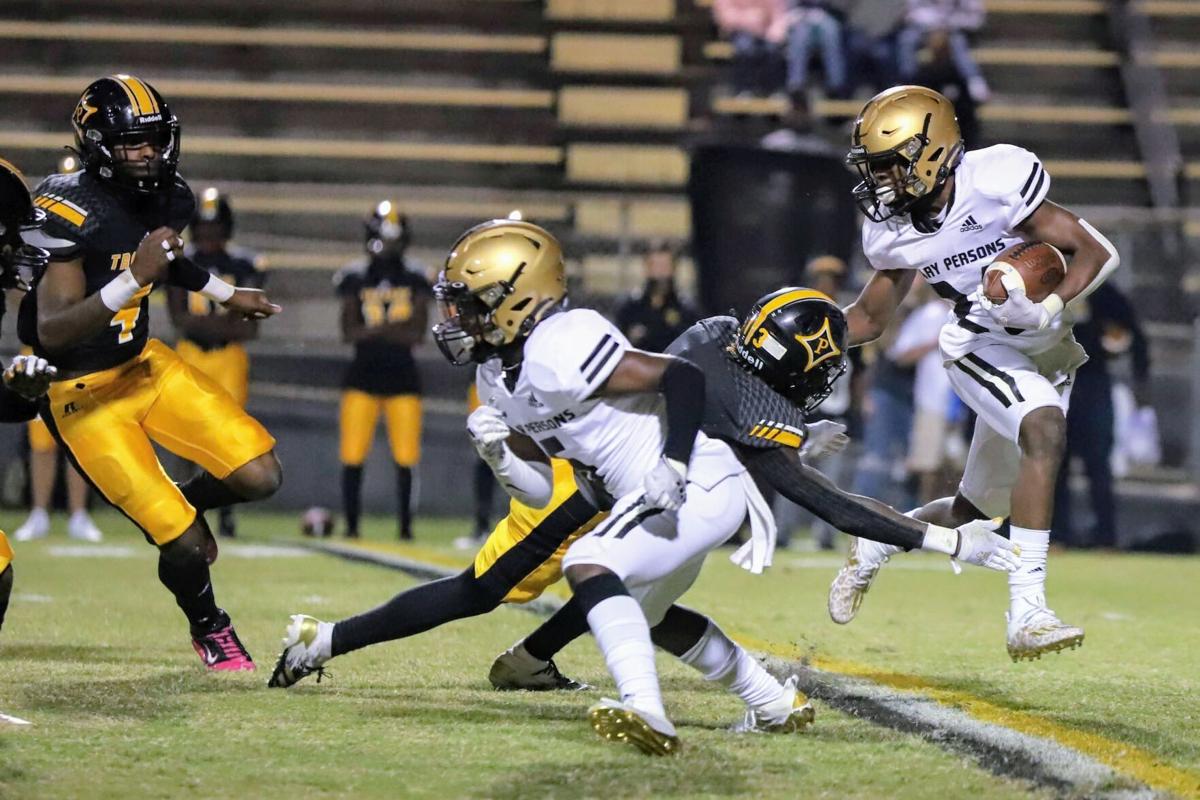 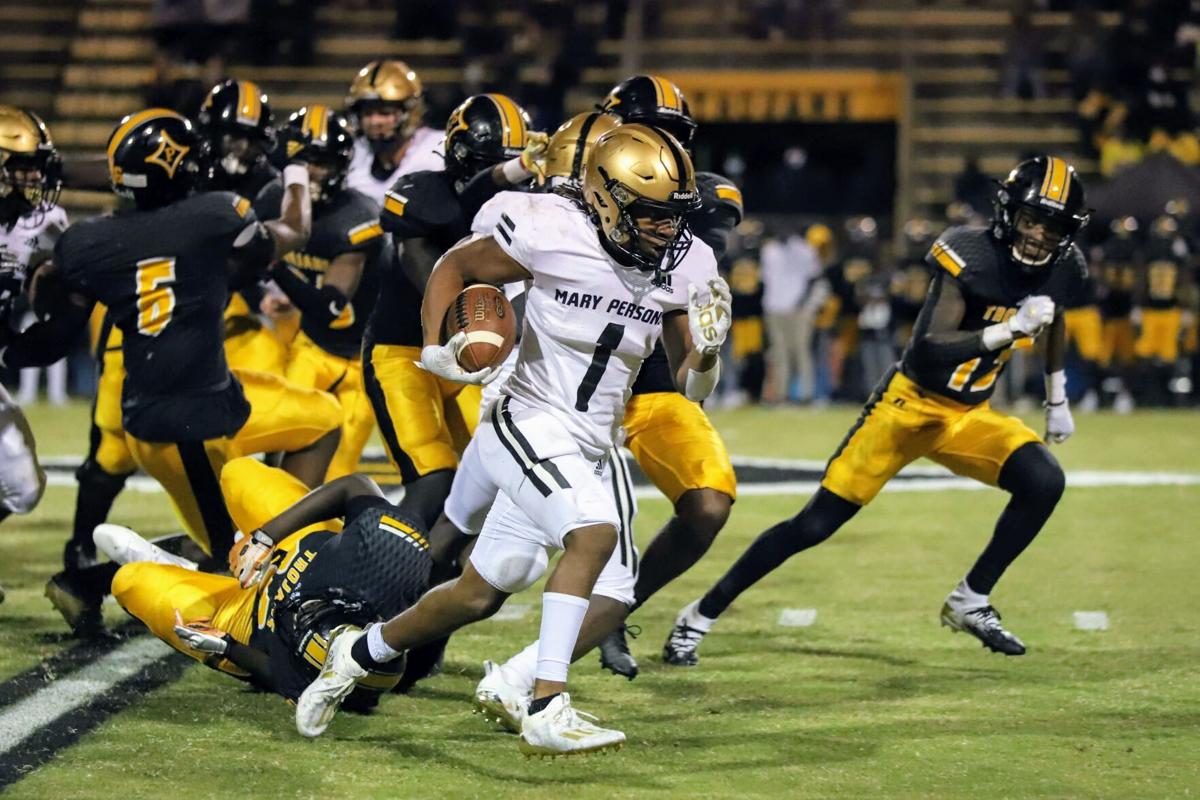 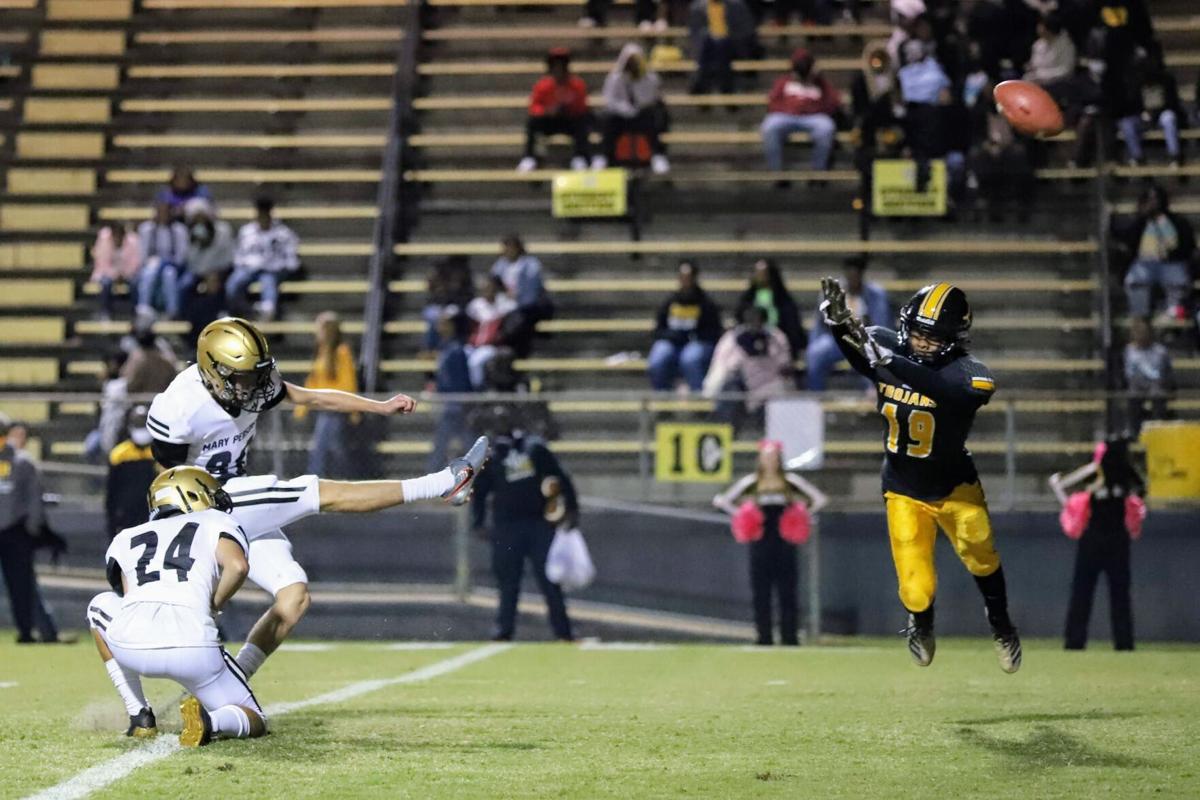 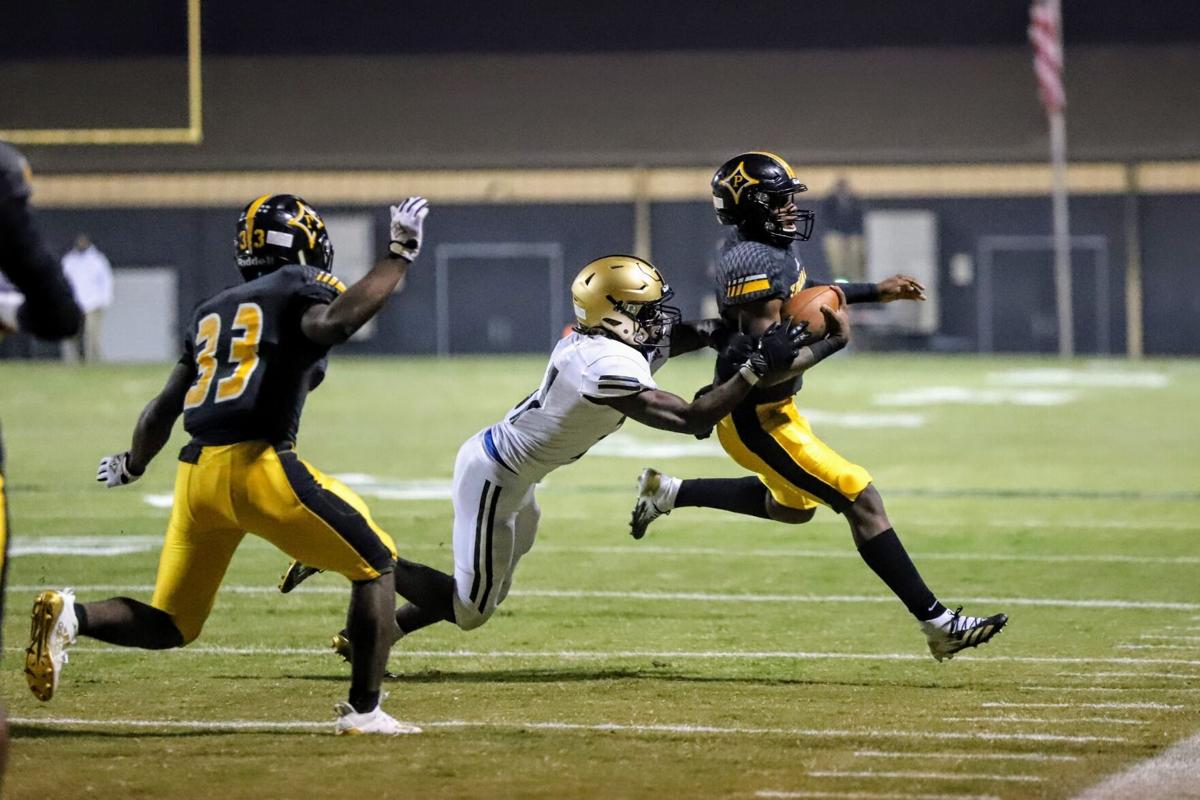 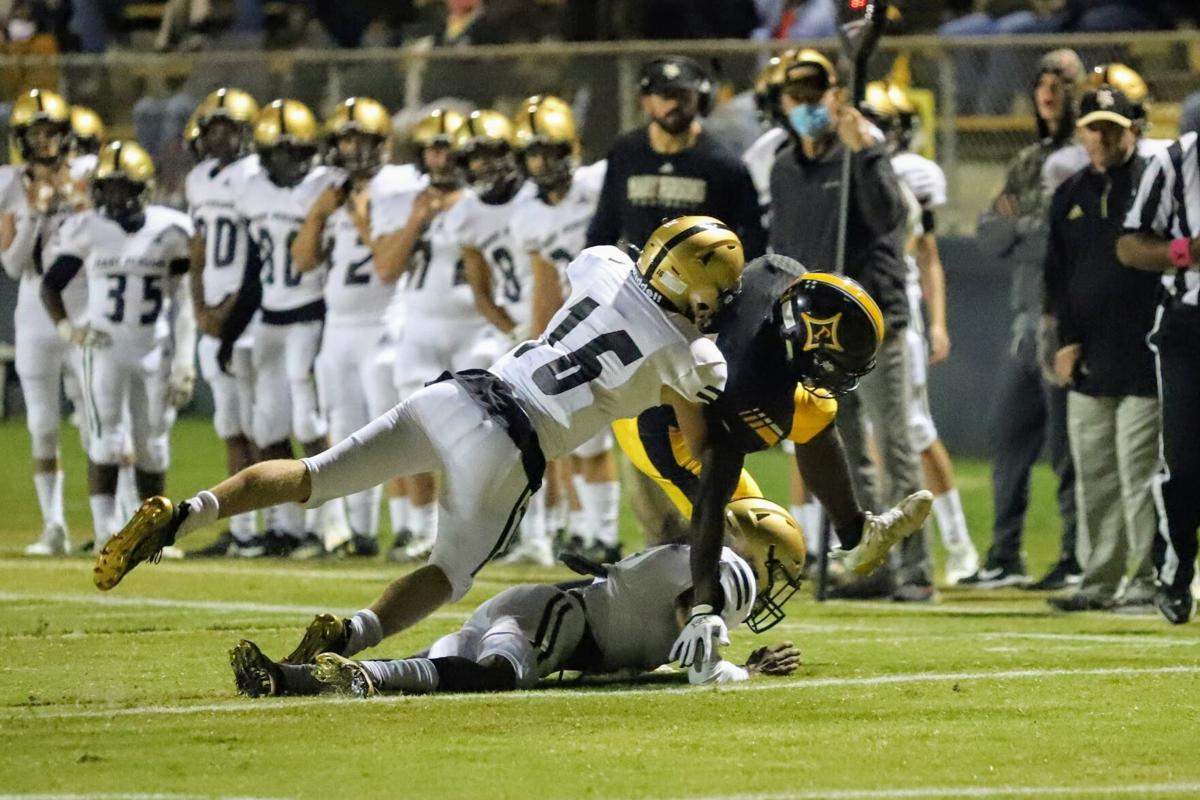 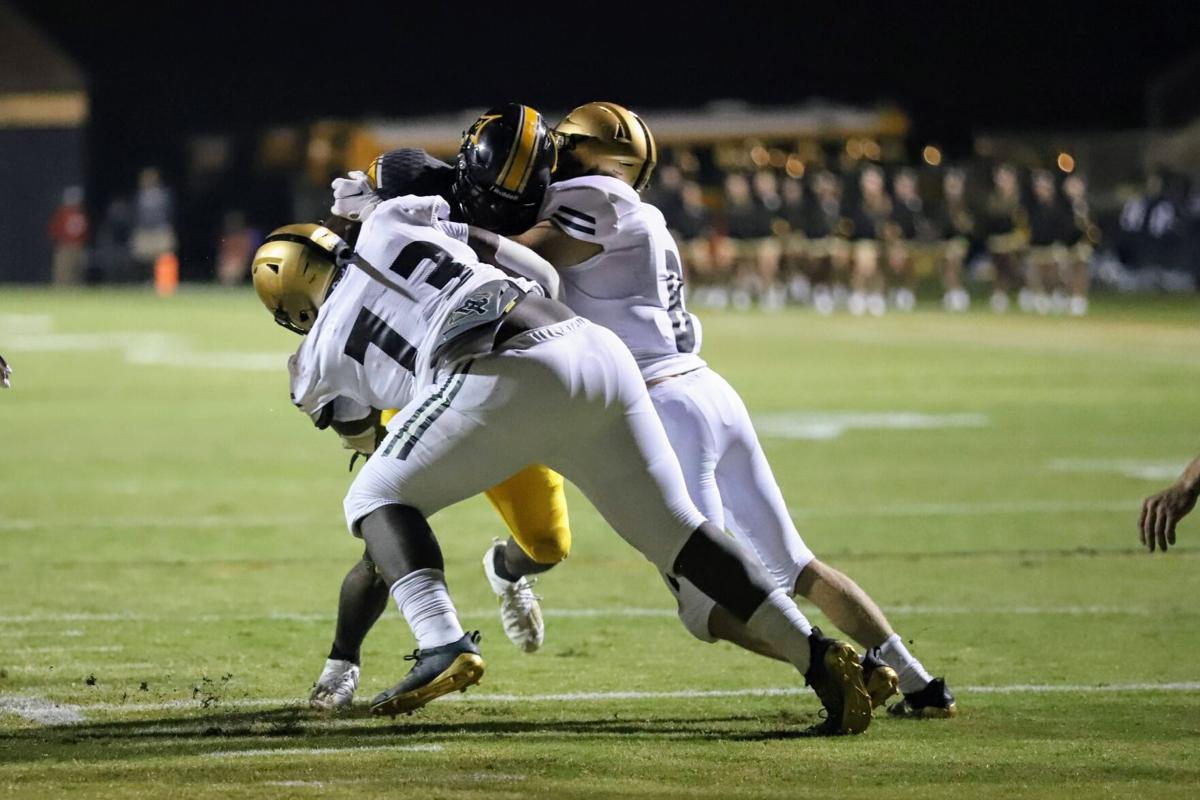 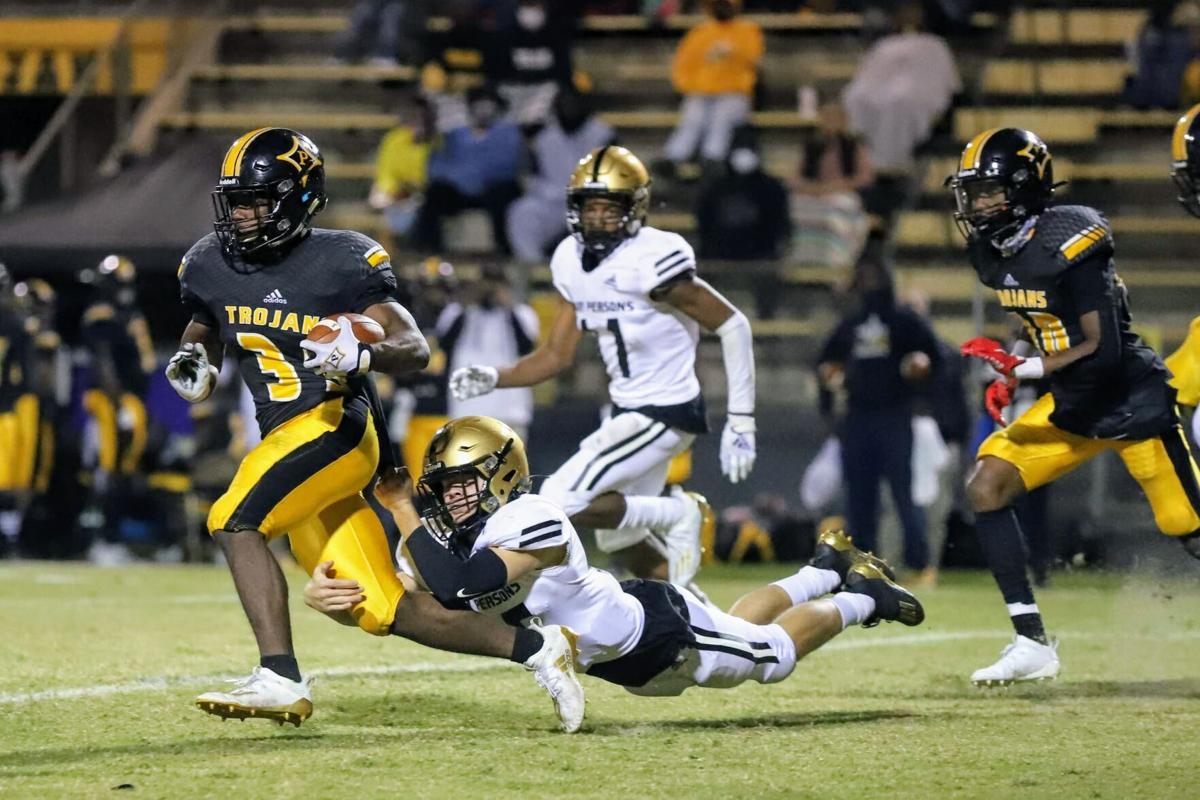 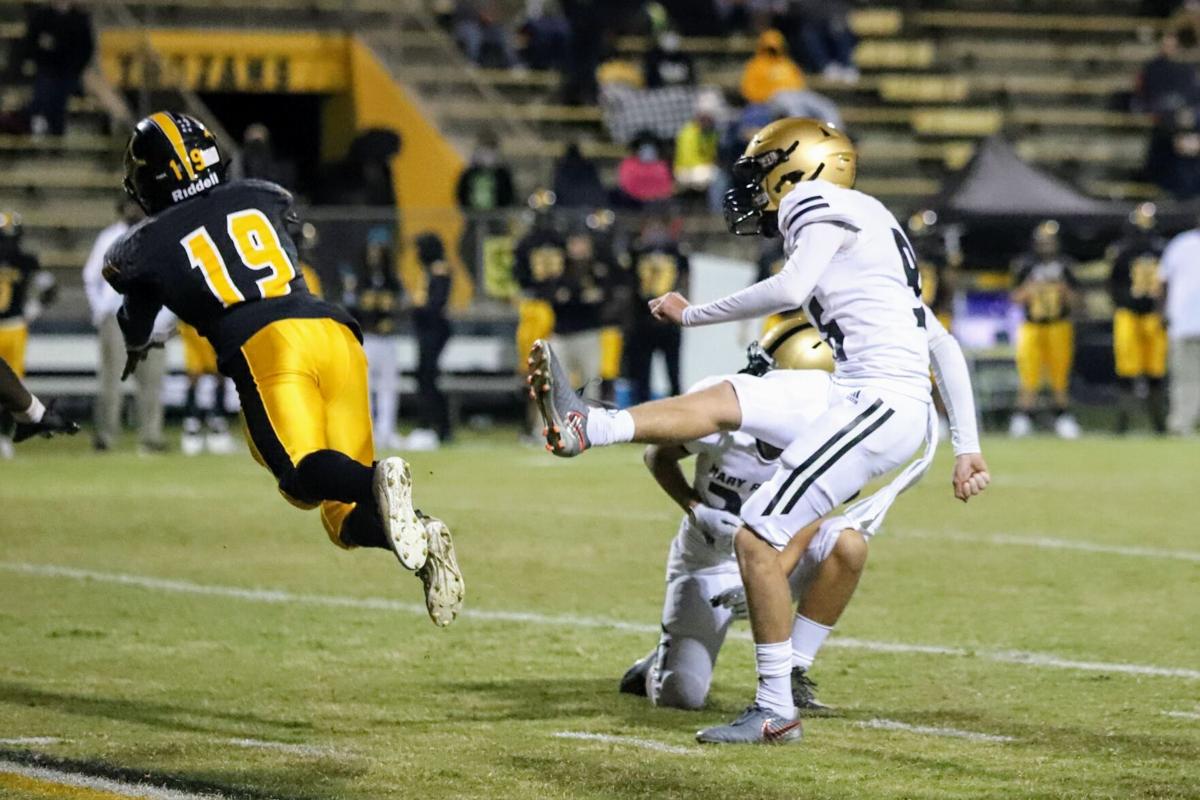 Mary Persons fell to 2-2 on the year, 0-1 in region after a 42-7 beatdown at the hands of the Peach County Trojans (2-1) on Friday. The Bulldogs will try to end their 2-game losing streak against Central-Macon in Friday’s Homecoming game.

The Bulldogs trailed just 14-7 at the half in Fort Valley, but had another rough third quarter as Peach County ripped off 28 points in a 7-minute span just after halftime.

With MP’s receiver corps depleted by injury and the offense struggling to throw the ball, MP coach Brian Nelson converted the Bulldog offense to the Wild Dog formation with direct snaps to a running back. Nelson said the goal was to get the ball in the hands of leading rusher Jaboree “Joker” Goodson and chew up clock, limiting the amount of time that Peach County had the ball. It seemed to work in the first half as the Trojans had just three possessions. But the direct snap offense yielded MP just 119 yards rushing and 3 first downs against the powerhouse Trojans. Goodson had 106 of those yards and MP’s only touchdown on 25 carries.

The Bulldogs punted on their first three possessions while Peach County put points on the board. Sophomore running back Jamond Jones scored from one yard out on both of Peach’s first two drives to give them a 14-0 lead.

But the Bulldogs got a break on Peach’s third possession when junior defensive back Brice Outlaw intercepted a Trojan pass and returned it to the MP 42 yard line. It was the third interception in just four games for Outlaw, who’s emerged as a defensive star.

Offensive coordinator Jason Morrow called for direct snaps to Goodson on first, second and third downs. Goodson took the third down snap and jetted 54 yards to put MP on the board with 5:55 left in the first half. Tripp Shipman’s PAT made it 14-7.

On its ensuing possession Peach marched down the field on a 15-play drive. But the MP defense hunkered down at the MP 10 yard line to force a 27 yard field goal attempt that sailed wide right. MP got to halftime trailing just 14-7.

The Trojans got the second half kickoff but MP forced a three and out as sophomore quarterback Christian Martin threw three straight incompletions. But the Bulldogs punted it right back after three straight carries by Goodson. And then things started going sideways for Mary Persons.

After another MP punt, Martin quickly found EJ Colson on a 45-yard touchdown pass and it was 28-7.

The Bulldogs went three and out again as the Wild Dog fizzled. Things went from bad to worse when Peach blocked the MP punt giving the Trojans the ball at the MP 25 yard line. And once again it took Peach just one play to score with a little razzle dazzle as receiver Dorrian Smith took a screen pass and threw it to freshman receiver Brandon Respress for yet another score. Now it was 35-7 with 2:07 left in the third. The Bulldog offensive woes continued on the next series as MP fumbled. Peach sophomore nose guard D’aren Igho-osagie scooped up the loose ball and rambled 15 yards for the score. The Trojans had put up 28 points in a dismal 7 minutes and the rout was on.

MP did have one offensive highlight when quarterback Logan Hickman, who started in the defensive secondary, hooked up with senior tight end Lamont Jones for a 44-yard pass play to the Peach 10 yard line. But the drive stalled there and MP missed a 33-yard field goal.

The Trojans have now won nine of the last 10 match ups with MP, the lone bright spot for the Bulldogs being the 2018 game.

Despite two straight lopsided losses to Peach and Newnan, Nelson said he still thinks the Bulldogs are pretty good, and just need to clean up some stuff. He said his biggest concern is that MP is -5 in the turnover margin the past two games, and the number of points they have given up.

“We’ve played two pretty good teams,” said Nelson. “I probably would’ve said in the beginning of the season that we’d be 2-2 right now. I told our players the only way you know how to get out of this is to work hard and stay together. The answer is not to work less.”

“It’s hard to overcome all that,” said Nelson. “We’ve got to play better in the third quarter — do different things at halftime maybe.”

Nelson said maybe they need to stop having halftime, period.

“Maybe we need to stay out there warm up again,” said Nelson.

But he reiterated that he doesn’t think the scores the past two weeks are indicative of the gaps between the teams.

“I don’t think Newnan or Peach are that much better than us,” said Nelson. “I can deal with the losing. It’s the scores we’re losing by.”