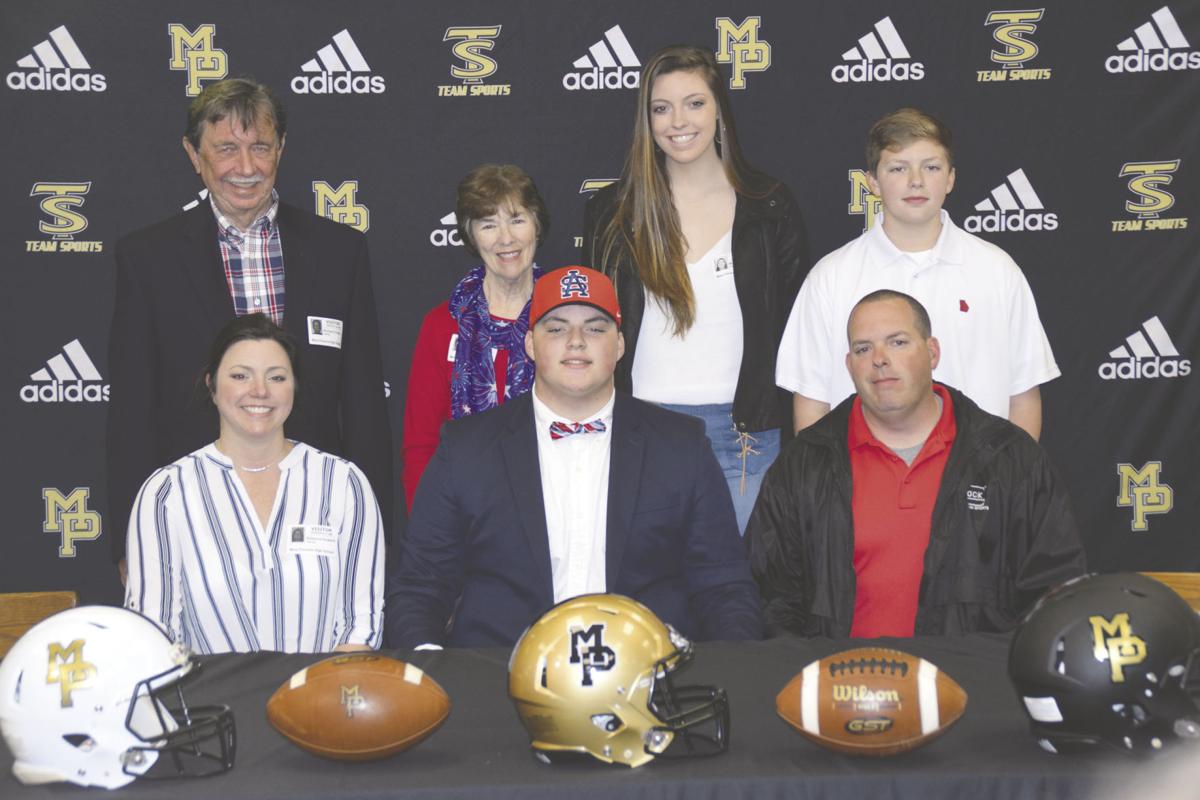 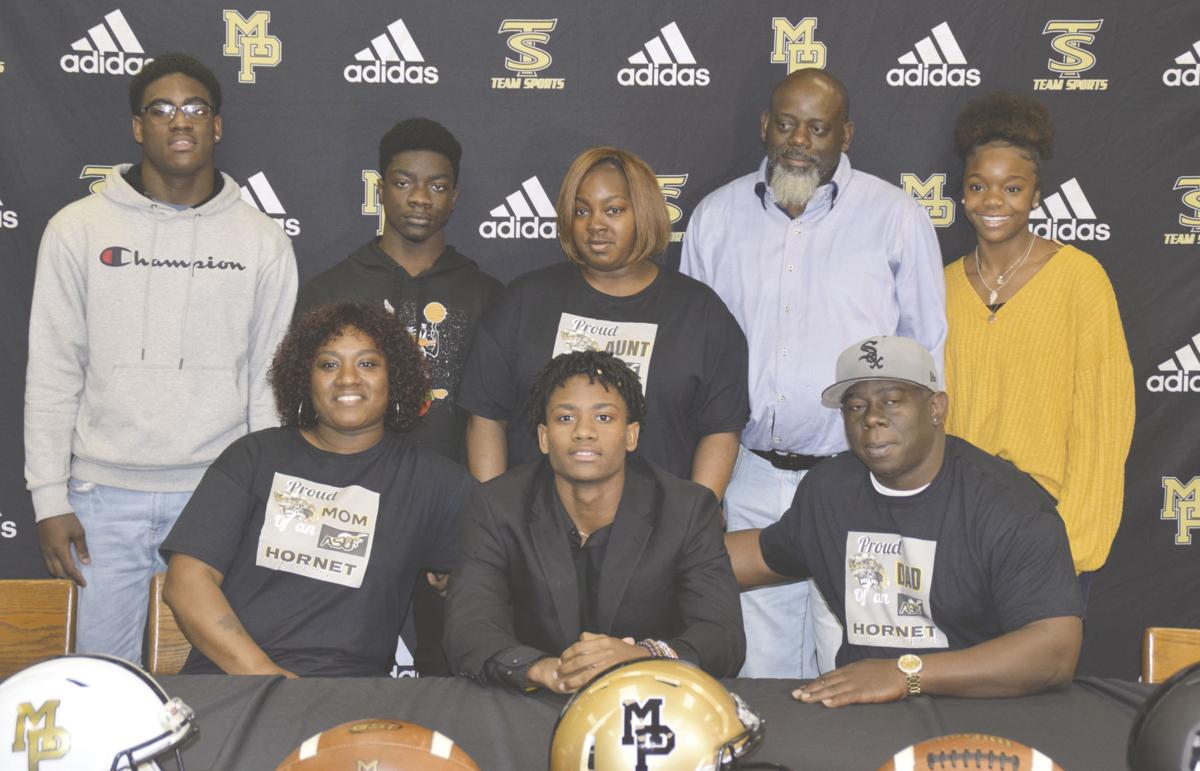 The 6’6”, 320-pound Howard, a 1st Team All-Region 2-AAAA selection as a senior, started every game at left tackle for the Bulldogs in 2019. As a sophomore in 2017, Howard was MP’s starting left guard, being named a Region 2-AAAA Honorable Mention selection. He then missed most of his junior season after suffering a broken leg prior to the season, an injury he initially feared could derail his dreams of playing college football.

Howard said of his 2018 injury: “That day when I went into surgery, my dad sat down with me and was like, ‘Dude, we don’t know if football’s going to pay off for you.’ We sat there and we cried and we talked about it. And then I got into rehab with Doc (MP trainer Jeff Quinn) and I was back in eight weeks and back grinding and I still had coaches hitting me up. So I was like, ‘Hey, maybe the dream’s still alive.’”

Howard’s father Tre said of his son’s roller coaster recruiting experience: “It’s been very trying. Recruiting’s a game, and it’s very difficult on the player and his parents. But in the end you’ve just got to trust the process, and I think Nate trusted it very well and it just wound up being awesome for all of us.”

Tre Howard said some major Power 5 FBS programs were recruiting his son prior to his injury, but he said many of them backed off when he missed 10 games during his junior season. He said Marshall and Valdosta State were among the top contenders in the final months.

Nate Howard said of his recruitment: “It’s definitely been overwhelming at times. There’s times when nobody talks to you and times when you’ve got 10 people calling you a day. It’s an up and down process, and you’ve just got to stick with it and keep your head right.”

Nate Howard said he was already sold on South Alabama even before his official visit to the Mobile, Ala. campus, but his father said he was swayed on the family’s trip.

“We loved it down there,” Tre Howard said. “I really did not expect the facilities that I saw. They’ve got awesome facilities down there. That’s a beautiful campus, and academics are second to none down there. Nate felt right at home.”

South Alabama, whose team name is the Jaguars, has been a member of FBS since 2012, qualifying for bowl games in 2014 and 2016. Nate Howard said South Alabama runs a pro-style system under third-year head coach Steve Campbell, and he will line up at left tackle.

He said, “They like my long arms and my length and the control I can get on the edge.”

Nate Howard said getting the chance to play college football “means the world to me.”

Howard said, “I put in a lot of hard work and dedication, sweat, blood, tears, all that. So being able to see it finally pay off means a lot.”

“I think South Alabama is a really good fit for Nate,” Nelson said. “He’s going to get a chance to play there early. I know his recruiting coach and the staff really well, and I just think it’s going to be a good fit for him.”

The 5’10”, 175-pound Harden chose Alabama State in Montgomery, Ala., which offered him a full scholarship, over University of Central Florida, where he was given a preferred walk-on opportunity.

Harden said the Alabama State coaching staff treated him “like a son” while his future teammates made him “feel like we were brothers.”

Harden said, “They showed me the love, and I know we can do big things.”

Harden said he was thrilled to get to celebrate his big day in front of his family and friends.

“It means a lot,” Harden said. “I’m going to school for free basically and doing what I love. Seeing the smiles on their (family members) faces, I’ve got a heart full of joy.”

Harden’s father Rico Taylor, a Forsyth native, said he’s excited for his son because the younger Harden will be first one of his children to get to attend college.

“It means everything to me and my wife,” Taylor said. “We both went through a lot of hard stuff growing up. I had the opportunity to play football, but I missed out on my dream. So for me I want him to stay in school.”

Harden, an all-purpose star at MP who was named the 2019 Region 2-AAAA Athlete of the Year, said he will initially play cornerback for the FCS Hornets but is expected also to see time on offense and as a return man on special teams.

Harden said, “They’ve got me as an athlete, but I’m a dog in whatever position they put me in. So I know I’ll do my job.”

Alabama State has put more than two dozen alums into the National Football League, including New York Jets running back Isaiah Crowell, who transferred to Alabama State in 2012 after his freshman year at Georgia.

Nelson said Harden was the premier playmaker on his 6-6 2019 squad, including during a playoff-clinching win at Howard in which the all-around star equaled the MP school record for touchdowns in a single game with five.

“I think this year, not having all those other guys around him, he could really showcase his talent and people could see what all he really could do,” Nelson said. “He was a kid that a year ago really only played on one side of the ball for us. This year he never came off the field. . . He had to carry us at times at the end of the year. That’s one of those things that he did very well was to be able to handle that workload. I’m proud of him for what he did for us and proud of him for what he’s got ahead of him in his future.”

Both Howard and Harden said their favorite career play came during the second week of the 2019 season when Harden ran behind Howard for a 41-yard, fourth-down touchdown scamper with 19 seconds to play to give MP a 36-29 home rivalry game win over Jackson.

Harden recalled demanding the ball in the critical situation after the Bulldogs had blown a 22-point, second-half lead.

“We were going to throw the ball, but I was like, ‘Nah, you’ve got to trust me.’” Harden said. “So coach trusted me and he gave me the rock. I took it to the zone.”

Nelson said Howard and Harden have each been fine contributors to MP during their careers on and off the field.

“They’re really, really good kids,” Nelson said. “They’re fun kids to coach, fun kids to be around. They don’t miss anything. They’re on time. They’re dependable. They’re accountable. And the thing about it is that’s what the college coaches see through the recruiting process. That’s why certain kids sign and other kids don’t.”